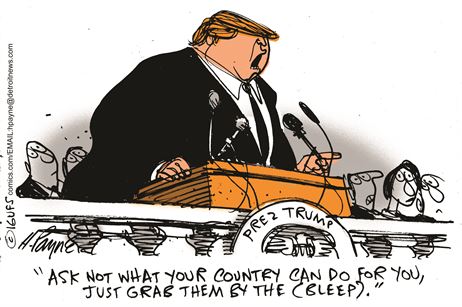 Republican National Committee Chairman Reince Priebus reiterated his support Monday for embattled Republican nominee Donald Trump — telling members of the RNC that the operation stands fully behind his campaign. This was apparently after the late afternoon conference call yesterday where committee officials decided whether they were going to continue to support Trump or devote all their resources toward helping down ballot candidates. (MORE)

GOOD NEWS FOR HILLARY
A federal court has extended Florida’s voter registration deadline from Tuesday to 5 p.m. ET Wednesday due to Hurricane Matthew’s interruption of last-minute sign-ups. The US District Court ruling comes after the Florida Democrat Party sued, seeking an additional

week due to the “strong likelihood” many of the state’s voters would be “severely burdened” by the hurricane’s fallout in the upcoming election. Florida Republican Gov. Rick Scott had denied the extension, saying last week that “people have had time to register.” The judge will hold another hearing to determine if the deadline should be extended a full week.

PUSSYGATE TAPE MAY BE THE TIP OF THE ICEBERG
There are supposed to be hundreds of outtakes of Trump’s TV show, The Apprentice, that have Trump acting in much the same way as he did on the now famous pussygate tape. “As a producer on seasons 1 & 2 of #theapprentice I assure you: when it comes to the #trumptapes there are far worse,” tweeted Bill Pruitt, a reality television producer who worked on “The Apprentice” wrote. Supposedly, there are legal reasons why they can’t be released. Now, David Brock, a Hillary ally, has offered to pay any legal fees, fines, or expenses for any NBC staff member that will supply them to him. Will we ever see them? Maybe someday, but it is unlikely before election day. But you never know for sure.

TRUMP THREATENS MORE ATTACKS ON CLINTONS
Donald Trump emerged from Sunday night’s presidential debate, ready to sling more mud. Trump, speaking before a rally in Pennsylvania on Monday afternoon, said he’s been ganged up on ever since Friday’s release of a 2005 tape that captured the billionaire speaking in incredibly crude terms about women. “I was 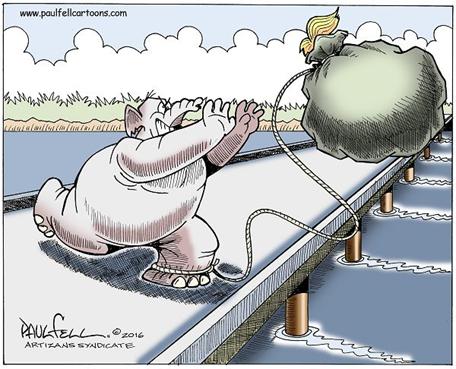 getting beaten up for 72 hours on all the networks for inappropriate words 11 years ago — locker room talk, whatever you wanna call it,” Trump said, referring to the wall-to-wall coverage of comments that described his ability to get away with sexual assault. “But, I said to myself, wait a minute — and I just saw very inappropriate words — but Bill Clinton sexually assaulted innocent women, and Hillary Clinton attacked those women viciously. One of them said more viciously than he attacked them.”Trump warned against the release of more damaging tapes of his past comments, threatening to continue attacking the Clintons over former President Bill Clinton’s alleged infidelities and Hillary Clinton’s response to those women’s accusations if more such tapes emerge. Though Clinton’s campaign has denied any involvement in leaking the “Access Hollywood” clip that has dogged Trump’s campaign since its release and prompted an exodus of support from prominent Republicans, Trump said more such releases will come at a risk for the Clintons — he cast Bill Clinton as 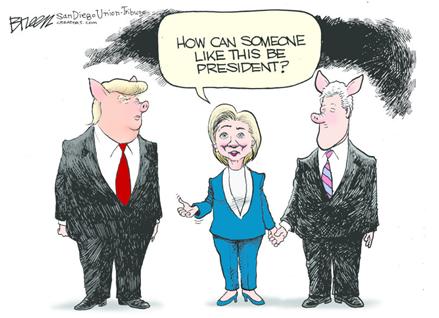 WHAT MELANIA WORE TO THE DEBATE
Melania Trump likes expensive clothes but she really should check with the campaign on her choices. Several people noticed that she wore a $1,100 Gucci creation to Sunday’s debate, which is described on their website as a “pussy-bow silk crepe de chine shirt.” Was this Karma, or her handmaiden’s inside joke? Whatever it was, the irony was not lost.

TODAY’S STATE POLLS
Everyone knew North Carolina would be close. All are waiting for the post-pussygate swing state polls to come out.