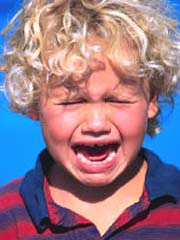 TODAY’S SEEDIEST KID OF ALL is  Young Tom Brinkman, who learned to hate taxes at an early age. He had to do without cable-TV because his dad was afraid if he couldn’t pay his property taxes on time, the Brinkman name would appear in the newspaper and the entire family would be too ashamed to show their faces in public, so Young Tom had to stay home and cry a lot.

So the Seediest Kids of All gave Young Tom’s family a bogus vendor’s license, so they could avoid paying sales taxes, and prepared phony non-profit organization papers so the family business could avoid paying income taxes. Tax scofflaw Roger Ach even invited Young Tom to his Christmas party so he could meet other people who didn’t like paying their taxes, and we gave Young Tom a big stack of tax forms so he could vent his anger by chopping them up with an ax.

The Brinkman family still hates taxes, but maybe when he grows up, Young Tom can run for political office. That’s if, he can ever figure out how to run a winning campaign. He could even call himself “Taxkiller Tom” and actually do something about cutting taxes, unless he was endorsed by the tax-and-spend Hamilton County GOP.  Those lousy RINO bastards are worse than liberal DemocRATS, because they only pretend to be in favor of smaller government.

The entire Brinkman family is grateful to the Seediest Kids of All, but it’s really you they have to thank, because it’s your liberal guilt throughout the year which makes it all possible.