FRIDAY, OCTOBER 7, 2016
Obama’s Bogus Unemployment Rate Is Now 5.0% (Whatever The Hell That Means) 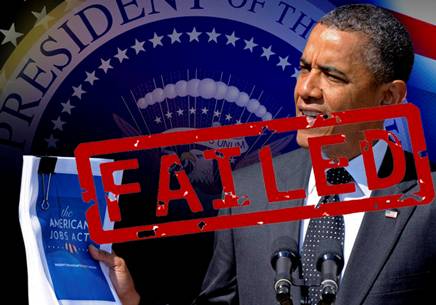 Whistleblower Business Editor Merrill Forbes wonders if anybody saw Obama’s lousy jobs report TODAY. Only 156,000 jobs were created in September, which was well below analysts’ expectations of about 175,000.

Whistleblower Pollster Ron Rasmussen says it’s no surprise polls show that nearly three-quarters of the public think the country is going in the wrong direction. And employment statistics in particular have a habit of eclipsing the real story. As any worker will tell you, it is not the number of jobs that matters most, but what kind of jobs are available, what they pay, and how that pay measures against the cost of living. Obama’s 5.0% unemployment rate is hiding the devastating story of underemployment, wage loss, and precariousness that defines life for millions of Americans just in time for this year’s elections in only 32 more days.

The Blower hopes Voters are finally fed up with Obama and his establishment cronies running our economy into the ground. Liberals just doesn’t realize that we can’t tax and spend our way back to economic prosperity. Right now, our real unemployment rate is still near 10%, families’ take-home pay has not risen for at least a decade, Nearly 95 million Americans over the age of 16 are not working, and our college graduates have been saddled with $1 trillion of student loan debt. And America has one person to thank for it, and that’s Obama. Obama can add Unemployment in America to his Legacy. He’s certainly earned it.

And do you think these are the kinds of talking points Hillary’s Henchmen will be whispering in her illegal earpiece at Sunday night’s debate?