It Just Sits There And Doesn’t Count Anything

All week, Persons of Consequence have been e-mailing The Blower asking why the Whistleblower Newswire Trademark Counter at the lower right hand corner of the Web Page hasn’t been counting anything ever since Hillary Started Lying at last Sunday night’s Dumbed Down DemocRAT Debate.

Actually, our No-Account Counter got overloaded when Hillary told her 458th lie, and now that we finally got the darn thing fixed, we’re having a little trouble trying to decide what event to count down next, and everybody we know has a suggestion. 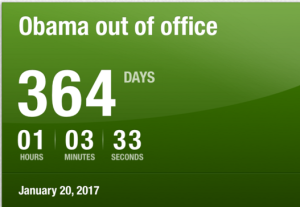 Of course, we could always count down the next 354 days until Inauguration Day 2017 when the nation can begin to undo all the damage Obama has done.

But with only 10 more days until February 1, Hawkeye Bureau Chief Jan Michelson says we should be counting down until the first in the nation Iowa Caucuses.

With only 18 more days until February 8, Noted New Hampshire Political Reporter Manchester Tadwell says we should be counting down until the first actual primary elections in 2016 Presidential Primary Elections.

Republican National Committee Chairman Reince Priebus says the next Republican debate is in only six more days on January 28, so maybe The Blower could start off with that.

Debbie Downer at the DemocRAT National Committee says her debate purposely isn’t until February 11, long after Iowans have their say, so we probably wouldn’t be interested in that.

City Hall Slackers would like The Blower to count down George Carlin’s remaining “Seven Dirty Words” still unused by Mayor Cranley and members of City Clown-cil.

Hamilton County RINO Party Boss Alex T., Mall Cop GOP would like The Blower to count down until the next Ohio Elections Commission Meeting, so he can whine about how Colerain Township Trustee Greg Insco fraudulently claimed he’d been endorsed by the Party.

Clermont County Republicans have scheduled their February 3 vote to unendorsed Ohio Second District Podiatrist/ Congressman “Bronze Star Brad” Wenstrup which The Blower has been exclusively reporting, so Central Committee Chairman Howard Hines was sure we’d want to pick that date.

“TaxKiller Tom” Brinkman says Ohio incumbents with primary opponents might like The Blower to count down the next 53 days until the March 15 Primary.

New Anderson Township Trustee President Andrew Pappas wonders if 291 Days is too many to count down until the November 8 Elections when he ousts Disingenuous DemocRAT Hamilton County Commissioner Odd Todd Opportune.

So what should we start counting next?
Send in your suggestions today.