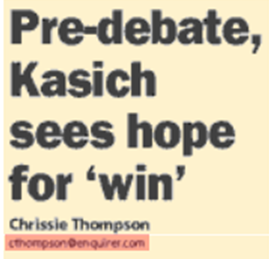 Kamikazes For Kasich
On the front page of this morning’s Fishwrap, Chrissie Thompson, tried to tell dumbed down readers: “Pre-debate, Kasich sees hope for “win.”

Is she insane? Ohio’s Republican Governor is now in eighth place with a whopping 2.3% of the polls, and they almost stuck him in the under card debate, where he really belonged.

Meanwhile, Kasich’s Kronies in Columbus “ENDORSED” him for president 44-9  (while no other candidates were even considered), and Ohio TEA Party Rabble-Rouser Tom Zawistowski, President of the We the People Convention, predicted Republican Primary voters would vote to elect Donald Trump or Ted Cruz in the March Primary in only 61 more days, and prove there is no Republican Party in Ohio, only the Kasich Machine.

Perhaps the Kasich Kampaign should put out a joke commercial like this. Then maybe all the Real Republicans begin to believe.