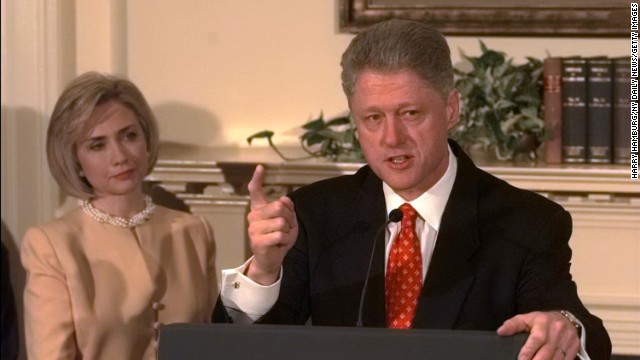 With Hillary Being Accosted On The Campaign Trail For Her Husband’s Peccadilloes And Perversions, The Blower Would Like To Go On Record: We Really Miss The Old Pants-Dropper-In-Chief.

Plus, Black people, although some of them won’t admit it, will tell you they miss Bill Clinton, too, because he’s the closest thing they’ll ever have to have a real black man as President.

He had his way with ugly white women, because he knew a pretty one could do anything, while an ugly one would have to do everything.

Even now? Look at him … his wife works, and he doesn’t! And, he gets a big check from the government every month.

Manufacturers announced today that they will be stocking America’s shelves this week with “Clinton Soup ” in honor of one of the nation’s distinguished men. It consists primarily of a weenie in hot water.

Chrysler Corporation is adding a new car to its line to honor Bill Clinton. The Dodge Drafter will be built in Canada.

When asked what he thought about foreign affairs, Clinton replied, “I don’t know, I never had one.”

The Clinton revised judicial oath: “I solemnly swear to tell the truth as I know it, the whole truth as I believe it to be, and nothing but what I think you need to know.”

What did Monica and a soda machine have in common? They both said “insert bill here!”

Clinton will be recorded in history as the only President to do “Hanky Panky between the Bushes.”

Whenever the interns left the Oval Office, didn’t he always say “Be careful honey—don’t hit your head on the desk?”

One thing Bill Clinton and Ross Perot had iN common was, they both heard a giant sucking sound.

And everybody knows Bill Clinton’s definition of “Safe Sex.” It’s whenever Hillary’s out of town.