Are They Lining Up Already? 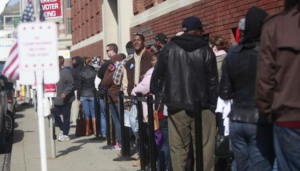 This morning, there may only be 29 more days until the polls actually open and all of the Angry People can finally cast their ballots for Donald Trump and all those other really important 2016 elections in Ohio, but all those DemocRAT Vote Frauders who can’t wait to vote to get their free stuff can Vote Early in Person at their local Boards of Elections for the November 8 General Election beginning at 8AM on Wednesday.

The Blower would already be counting down the days, hours, minutes, and second until the doors open at the Board of Elections, but the counter at the lower right hand corner of the Whistleblower Web Page is currently being used to click off the moments until Thursday’s over-packed Donald Trump rally at the US Bank Arena.

Bluegrass Bureau Chief reports Ken CamBoo there’s no such thing as “Early Voting” in Kentucky. They only have “Absentee Voting.”  And to get an Absentee Ballot, voters have to write or go to the County Clerk’s Office and apply for one. And applicants must actually state a valid reason, under oath, why they can’t vote on Election Day like everyone else. It’s not like Ohio where anybody can “vote early and often” just because people like Hamilton County Demo-Labor Party Boss Tim Burka, Free-Stuff Dispensing Liberals, Rhyming Reverends, and Union Goons tell you to.

And just think, if all those Dumbed-Down, Self-Absorbed, Media-Influenced, Celebrity-Obsessed, Politically-Correct, Uninformed, Short-Attention-Span, Free-Stuff Grabbing, Low-Information Obama Supporters Who Put The Positively Worst President in History In The White House—Twice, and Now Plan To Give Obama a Third Term By Voting For Hillary, and get all of their information from our Obama Supporters in the Press, like the ones on Channel 5, 9, 12, and 19, actually showed up today at their Board of Elections at 8AM this morning, there’d be one hell of a long line.