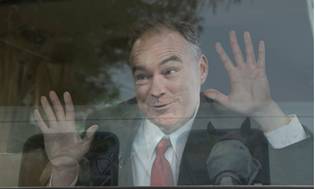 Our Beloved Whistleblower Publisher explained. “Is Tim Kaine the most obnoxious liberal ever? Twitter says ‘Yes.’ And the only way Hillary’s Designated Interrupter could’ve been any more obnoxious would’ve been if he had Tourette’s Syndrome.”

Most people wished Pence would’ve told Kaine to just shut the fuck up, or reached over and slapped the shit out of him.

Elaine Quijano must’ve been sick and tired of hearing about Hillary’s damn emails, since every time Mike Pence tried to mention the subject, the Biased DemocRAT Immoderator interrupted him. 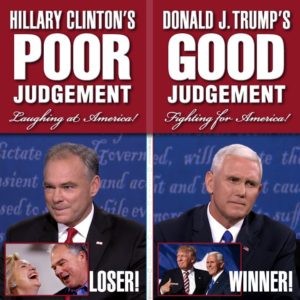 During Tuesday night’s vice presidential debate, moderator Quijano was quick to interrupt Republican Gov. Mike Pence (Ind.) whenever he brought up Hillary’s email scandal or questions about her family’s foundation. Quijano interrupted Pence a total of five times. There was one exchange when Pence tied the issue of cyber security to Hillary’s private email server. Quijano interrupted Pence throughout his answer but allowed Hillary’s running mate Tim Kaine to respond to Pence without interruption.

Even The New York Times admitted she took sides: “Elaine Quijano, the moderator, helped Mr. Kaine along, opening one question with a recitation of Mr. Trump’s statements.”

“We can hardly wait to see how Hillary’s Immoderators will be interrupting Donald Trump at their Second Presidential Debate Sunday night,” Kane said. “That really ought to be a doozy.”