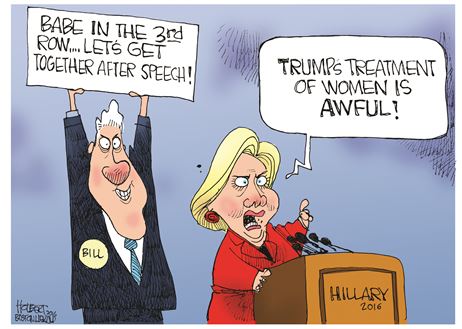 A long article in the New York Times today deals with all of the many bimbo eruptions of Bill Clinton’s political career and how Hillary dealt with them. Depending on your point of view, she is either a sympathetic figure or not. It is worth reading. More here:

REALLY BAD NEWS FOR HILLARY
Wednesday will be the end of Hillary’s campaign. That is, if you believe Trump advisor Roger Stone, who is not known to have said anything truthful about politics in his entire life. Nevertheless, he says that the much anticipated Wikileaks dump will occur on Wednesday. Everyone on both sides is eagerly waiting to see what it will be, or even if anything at all will occur. 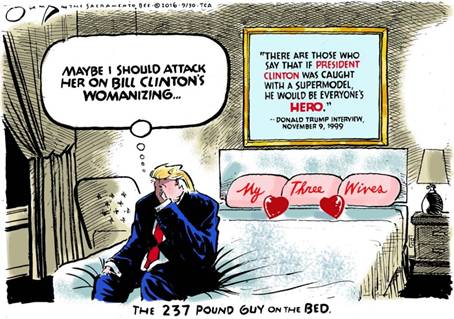 TRUMP IS A TAX GENIUS
Donald Trump’s top surrogates on Sunday tried to spin a report suggesting the GOP presidential nominee could have avoided paying federal taxes for almost two decades as evidence why he would be the best candidate to overhaul the tax system.”There’s no one who’s shown more genius in their way to maneuver around the tax code,” New Jersey Gov. Chris Christie said in an interview on Fox News Sunday. Rudy Giuliani, in multiple appearances on the Sunday talk shows also used the term “genius” to describe Trump’s managing to pay no federal income taxes. Trump’s campaign was playing defense after a New York Times story on Saturday revealed that Trump reported a $916 million loss on his 1995 income tax returns, allowing him to avoid paying federal income taxes for as long as 18 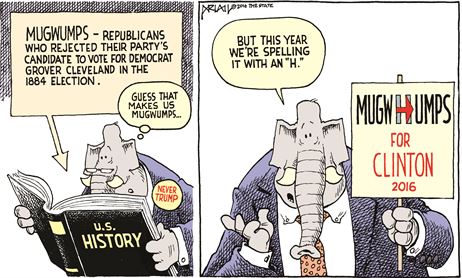 years. Trump has refused to release his tax returns. Of course, if there is any tax genius working in the Trump organization, it is more likely to be one of The Donald’s tax accountants. Clinton’s campaign asked how a genius could manage to lose over 900 million dollars in one year.

TRUMP ACCUSES HILLARY OF CHEATING ON BILL
Donald Trump on Saturday appeared to accuse Hillary Clinton of cheating on her husband, former President Bill Clinton. “Hillary Clinton’s only loyalty is to her financial contributors and to herself. I don’t even think she’s loyal to Bill, if 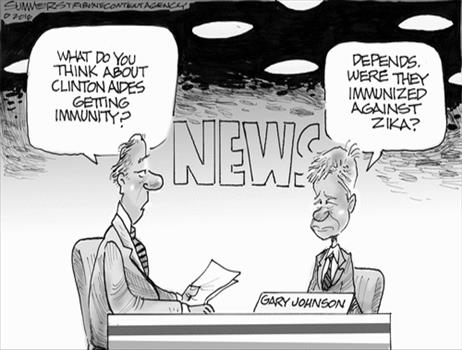 you want to know the truth,” the Republican nominee told the crowd at a rally in Manheim, Pennsylvania. “And really, folks, why should she be, why should she be.” Trump indicated earlier Saturday that he is considering launching a wider attack on his opponent on Bill Clinton’s sex scandals before and during his time as president. It’s the first time he’s intimated that the Democratic nominee could have been unfaithful to her husband.

TRUMP’S NEW D.C. HOTEL VANDALIZED
The spray-painted slogans appeared on either side of the entrance to the Trump International Hotel, which opened its doors last month. Photos posted on social media indicated that the hotel attempted to cover up the defaced portions of the facade with wooden boards. “On 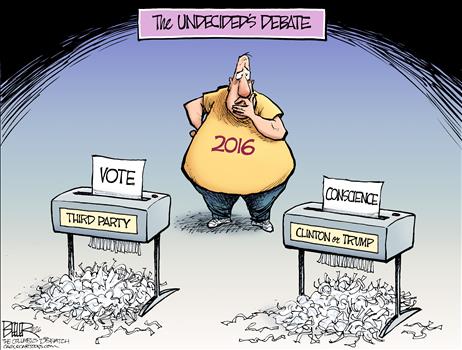 October 1st at approximately 4:03 p.m., officers received a call about destruction of property at the 1100 block of Pennsylvania Avenue NW, which is also the Trump International Hotel,” Metropolitan Police Department spokeswoman Aquita Brown said. “We are investigating an offense of defacing public and private property.” One of the phrases said simply, “Black Lives Matter.” The other said “No Justice, [No] Peace,” with the second “no” conveyed by a red slash. Photos posted online suggested the two tags were signed by someone using the name “Van.” Brown said that as of early Sunday afternoon there had been no arrests in connection with the incident. Doesn’t this supposed high-end hotel have a doorman? 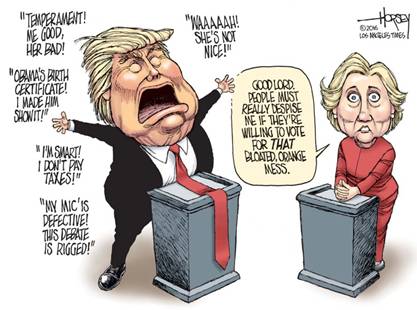 Unusual election rules in Pennsylvania allow anyone to challenge a voter’s right to vote, without any reason, requiring them to get a signed affidavit to cast their vote. Multiple challenges could create delays and long lines. If Democratic leaning districts were targeted in an organized campaign to disrupt voting in this manner, it could throw the normally blue state to Trump.

DUBYA’S DAUGHTER AT HILLARY FUNDRAISER
Further indication of how the Bush family is going to vote this year is the appearance of George W. Bush’s daughter Barbara at a Paris fundraiser. Here is the story, including a photo of Barbie and Hillary’s aide, Huma Abedin, who was hosting the fundraiser.

TODAY’S MEANINGLESS POLLS
Nothing unusual here. Gary Johnson is the former Governor of New Mexico, which accounts for his unusually strong showing there. Illinois is a solidly Democrat state.