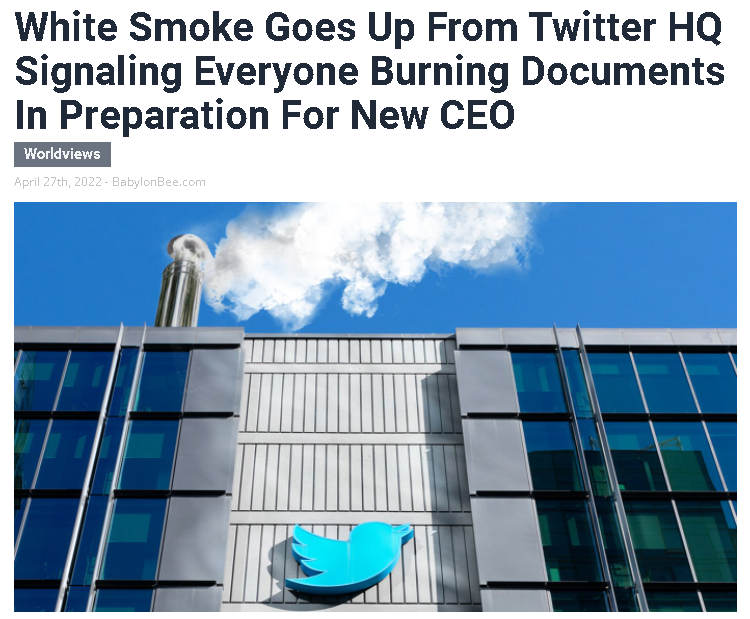 WEDNESDAY, APRIL 27
TRUMP’S FOUR-HUNDRED-AND-SIXTY-SECOND-DAY OUT-OF-OFFICE
AND HERE’S SOMETHING YOU WON’T SEE ON THE NIGHTLY NEWS 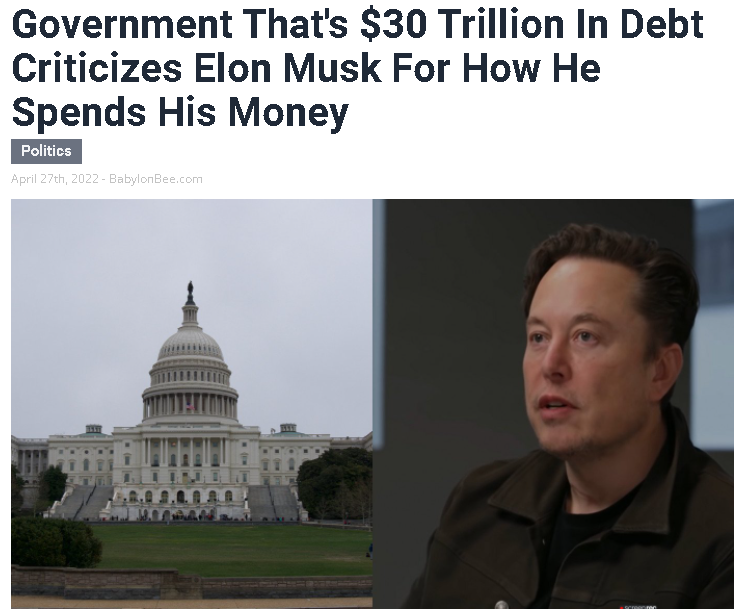 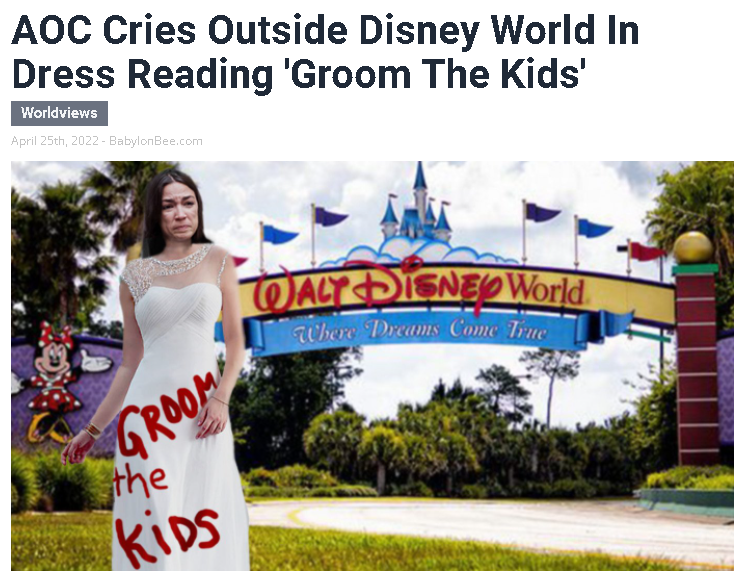 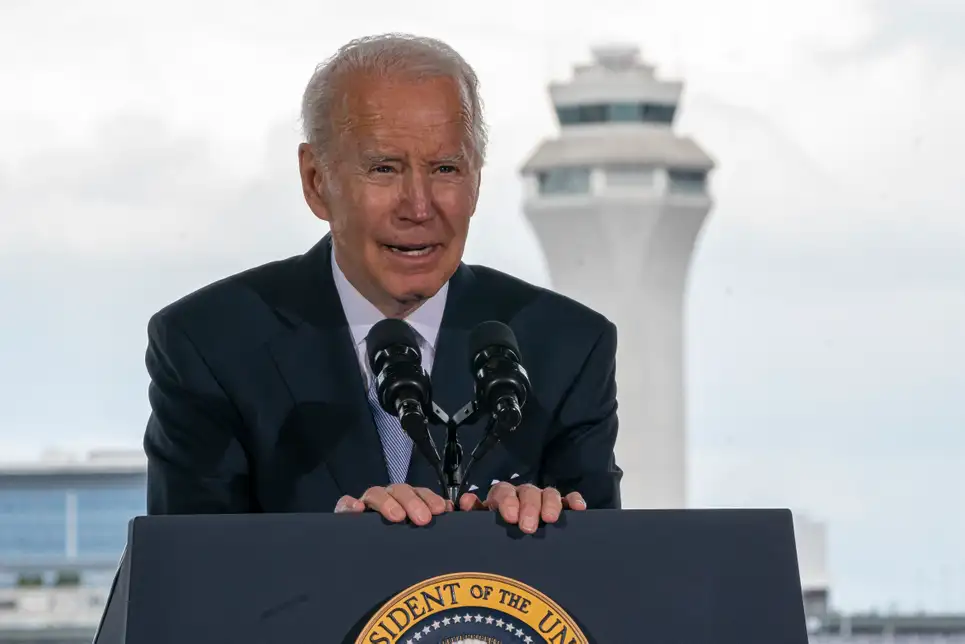 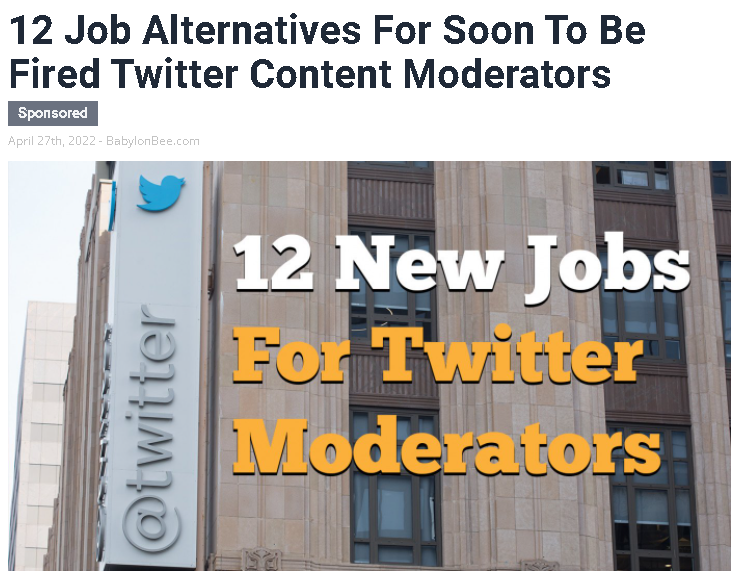 Twitter will be going through some changes in the coming weeks as it transitions from a thought police enforcement zone to an actual social media platform. One big change will be the removal of employees who don’t understand the difference between disagreement and hate speech. But don’t worry! We see you and we hear you, former Twitter employees!
Here are some new jobs that fit your expansive skillset:
1) White House Press Secretary: Wow! What a prestigious position! Too bad there can be only one. You’ll have to fight it out with your several hundred colleagues for this one.
2) Person who dresses up as the Easter Bunny to secretly run the country: What little boy, girl, or non-binary “they” hasn’t dreamed of growing up to be a shadow president in an uncomfortable costume?
3) North Korean General: This job is just so perfect for you.
4) Jr. Pronoun Enforcer at your local middle school: Sorry, no internet anonymity this time. You’ll have to call MAGA hat-wearing Suzy Mayworth a gender racist to her face.
5) The person at Pfizer who pays test subjects to keep quiet: Meet interesting people with strange and exotic new mutations!
6) Elite Hacker for Chinese State Media: It’s a full-time job deleting pictures of Tiananmen Square from the Internet. Job security! Nice!
7) Cashier for the CNN+ “Going Out Of Business Extravaganza!”: This is a temporary position.
8) Chief of Staff to the Vice President: Also a temporary position.
9) Disney Groomer: You’re probably already doing this for free. Why not get paid?
10) Clown: Be the Bozo you were born to be!
11) Tesla Parking Attendant at Twitter HQ: The new Twitter overlord is most merciful.
12) Chinese Movie Editing: It’s like normal movie editing but you cut out all the LGBT content from Hollywood films. It’s censorship in the other direction. You got this!
Or just go work at Google I guess.
________________________________________
NOT SATIRE: Elon Musk and entrepreneurs are making a REAL difference. Let’s raise our kids to fight for free speech, and liberty, and to reject WOKE left-wing radicals. How? With the Tuttle Twins.

SAVE AMERICA RALLY SCHEDULED IN GREENWOOD, NEBRASKA ON APRIL 29

Foster Kane Says The Conservative Agenda is watching to see if any progress is made during the next SIX days before this year’s primary’s elections on May 03, unless they’re postponed.