This afternoon at the Conservative Agenda, Political Insiders were asking Beloved Whistleblower Publisher Charles Foster Kane about that local not totally unattractive Muslim Dentist who supported genocide of Jews and torturing “Zionist” Patients. 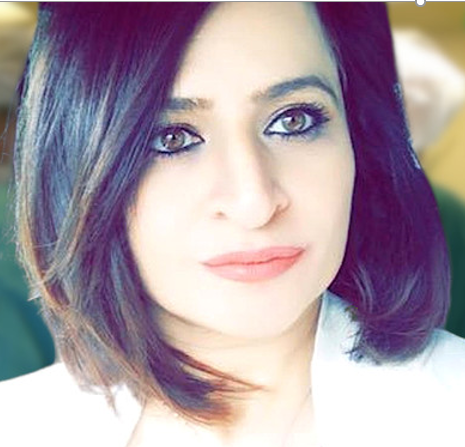 “That’s what Jihad Watch reported on Tuesday,” Kane explained. “The headline said Muslim dentist joked about torturing her Zionist patients ‘with my pleasure.’ ” 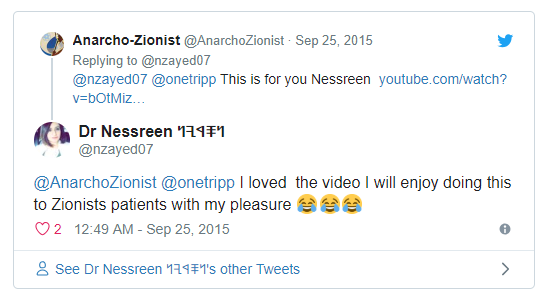 Pamela Geller says, “Even the Nazis didn’t take such unbridled joy from genocidal hate and bigotry as do today’s Muslim Jew-haters. It literally defines them. Zayed is like her fellow medical professional Lara Kollab, the vicious Muslim racist who had a monstrous history of Jew-hatred and racist statements and even BRAGGED about her hatred but wasn’t fired until Canary Mission called attention to her statements. Is Zayed currently employed in the Cincinnati area? Did her employers not vet her?”

Or did they secretly agree with her?

Canary Mission has some eye-opening material about an individual named Nessreen Zayed, who describes herself on Linkedin as a dentist in the “Cincinnati, Ohio Area,” though it’s unclear where she’s actually currently employed. Is she employed? Is her employer aware of her intentions to harm her Zionist patients? Are her gleefully evil statements tolerated because any other course of action would be “Islamophobic?”

On her Twitter bio, Zayed describes herself as a “Palestinian dentist,” “proud Muslim,” and “temporarily in the exile [sic]” in the United States. When she was admitted, doubtless her standing as a medical professional impressed those who were examining her case. They never would have dreamed of asking her what she thought about treating Jewish or pro-Israel patients. That would certainly have been an “Islamophobic” question.

Zayed says “She will torture ‘Zionist Patients’ with ‘Pleasure,’ expressing support for Hamas, a terrorist organization.

One of her favorite movies of all time is Marathon Man, starring the imposing acting duo of Laurence Olivier and Dustin Hoffman. Perhaps the most iconic scene is when Olivier’s Nazi war criminal Dr Christian Zell, a dentist, tortures Hoffman’s “Babe” Levy, a Jewish graduate student. What is even more terrifying is the idea that real-life Cincinnati dentist Nessreen Zayed is out there practicing – because she has expressed a desire to go “All Zell” on “Zionists.”

Canary Mission also unearthed dozens of controversial statements made on Zayed’s Twitter page, including one in which she said she “will enjoy doing this to Zionist patients” with “pleasure.” The comment was made in a response to a scene from the movie “A Little Shop of Horrors.” In the scene, Steve Martin joyfully sings and dances while torturing his patients in the dentist’s chair.

“It could be worse,” Kane concluded. “Instead of dentistry, Zayed could be doing circumcisions.”