TODAY IS
TUESDAY, APRIL 12, 2022
TRUMP’S FOUR-HUNDRED-AND-FORTY-SEVENTH DAY
AND ANOTHER ONE OF OUR DISHONEST D-RATS’ FAVORITE VOTER FRAUD SCAMS IS VOTER REGISTRATION FRAUD

Root-Root-Rooting for the Home Team! 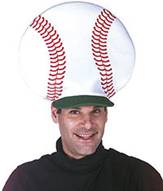 Typical Reds Rooter Farley Fairweather is back. And he’s really excited because Bell’s Boys are now in third place in the National League’s Central Division. Actually, they’d be in last place if the teams were arranged alphabetically by team name. Farley wonders how long his beloved Cincinnati Redlegs’ magic number will still be “162.”

Farley will, however, be making some rather bold predictions for professional baseball’s first team as it begins the 2022 season on Tuesday’s Opening Day: Tyler Mahle will become major league baseball’s first 30-game winner since Denny McClain did it in 1968 . . . And Joey Votto will prove he is worth every penny of the roughly $45,000 he’s paid each and every time he comes to bat!

Maybe that’s why our Quote for Today Committee chose Ted Williams’ “Baseball is the only field of endeavor where a man can succeed three times out of ten and be considered a good performer.”

And in a related item, Hurley the Historian says on this date in 33 AD the first baseball game was played between the Bethlehem Braves and the Jerusalem Giants with Harry Carey doing the play by play. Eat your hearts out, Marty and Thom, wherever you are!

FINALLY, EVERYBODY’S WONDERING WHY TRUMP DIDN’T BUY HIS OWN TEAM SO HE COULD THROWOUT THE FIRST PITCH (WHICH HE NEVER DID AS PRESIDENT)