TODAY IS
WEDNESDAY, MAY 11, 2022
TRUMP’S FOUR-HUNDRED-AND SEVENTY-SIXTH DAY OUT-OF-OFFICE
AND HERE ARE A FEW MORE PEOPLE WHO AGREE WITH “MEAN JEAN” SCHMIDT ABOUT RAPE

Edition #50 (published on May 14, 1991) of the original printed edition of The Whistleblower (not the Newswire) was delivered to Persons of Consequence all over town.

The Really Big Story was about the defense Mickey Esposito planned to use at his upcoming trial.  The Top Ten List was the top ten excuses Mickey planned to use in that defense, an announcement about the Whistleblower Hotline, and an item about the possibility of a visit to the Queen City by Queen Elizabeth.

Page Two with a Real Editorial by Publisher Charles Foster Kane about a help wanted ad for Republican Presidential Candidate for the upcoming elections in 1992. Real Facts uncovered the big stink at the old Alms & Doepke Building on Central Parkway, and an ad for the Sleaze Card Show, with proceeds benefiting the Mickey Esposito Defense Fund. 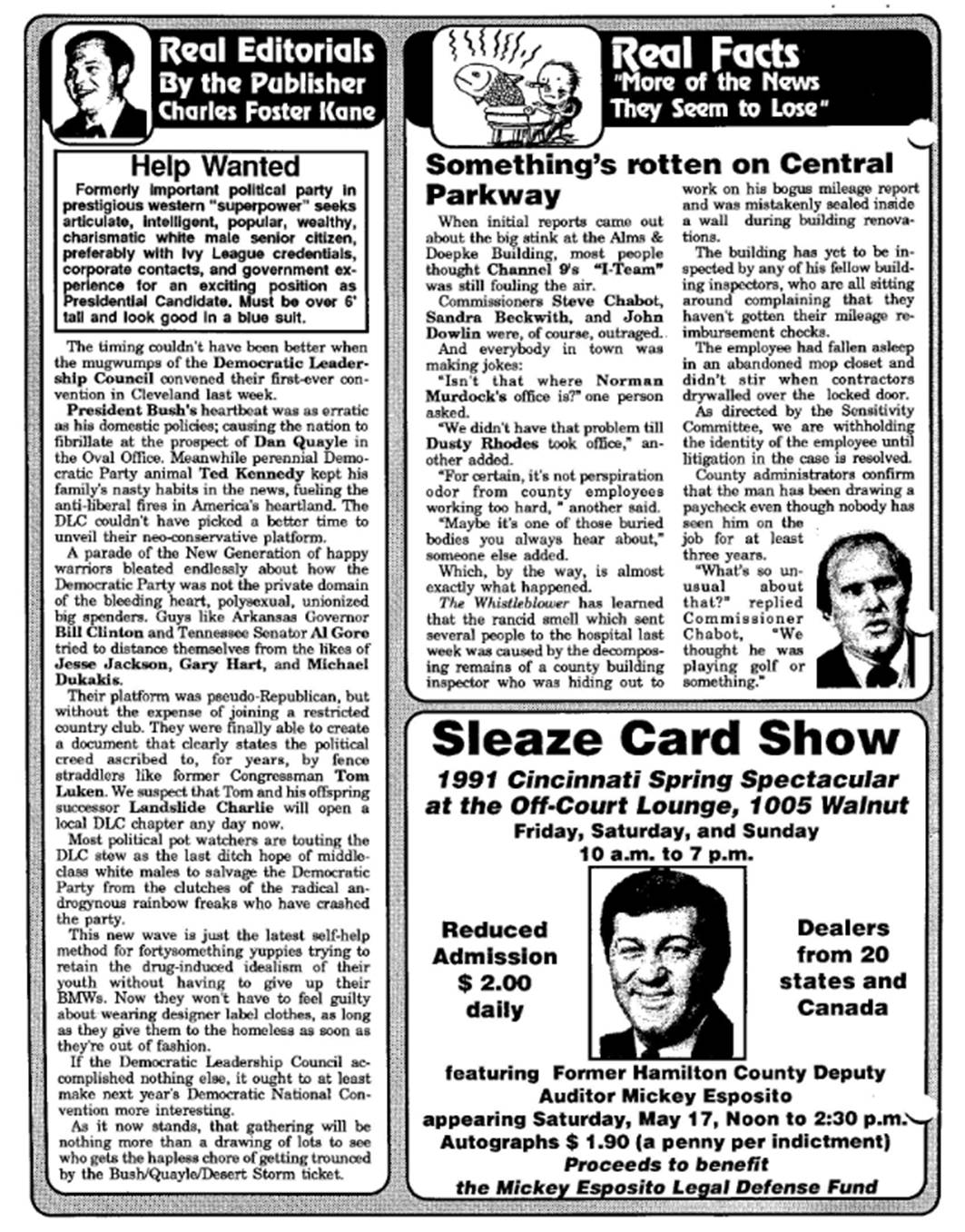 Page Three featured Cheap Shots at Ken Blackwell,  Roxanne Qualls, Dwight Tillery, and Tyrone Yates. There was a promo for Beloved Whistleblower Publisher Charles Foster Kane’s appearance on a radio program Thursday mornings at 9:05 AM, and, as always, Another Real Guest Editorial by Bunky Tadwell (this one about miracles), and an item about Deputy Duke, the drug sniffing dog who found cocaine in an inmate’s cell at the Hamilton County Injustice Center. 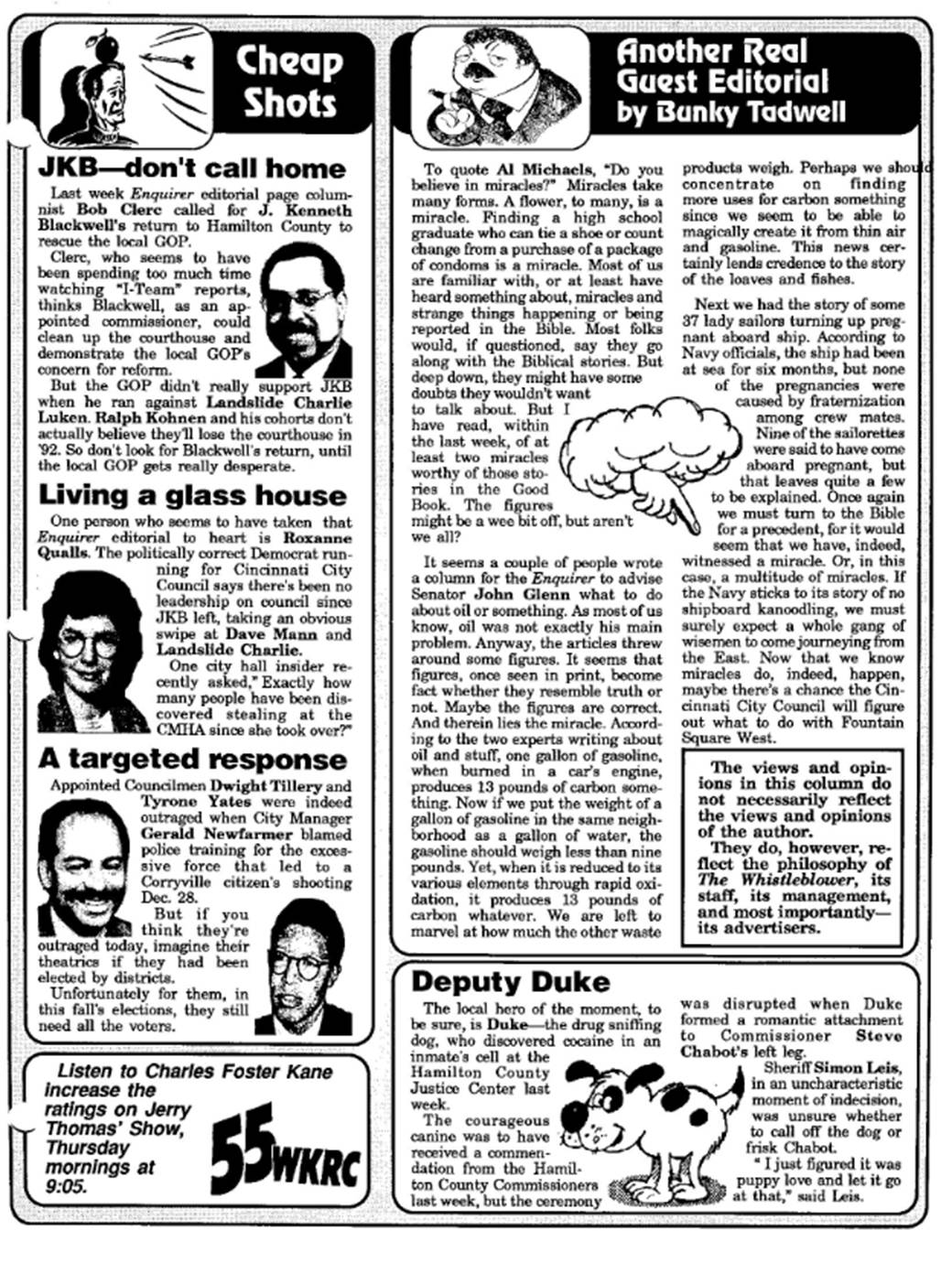 Page Four was for our regular weekly Real Letters From Real Readers column, Another Exclusive Whistleblower Report told about another Channel 9 “I-Team” Report, and we saw Sleaze Cards for Dick Weiland and Joe DeCourcy. 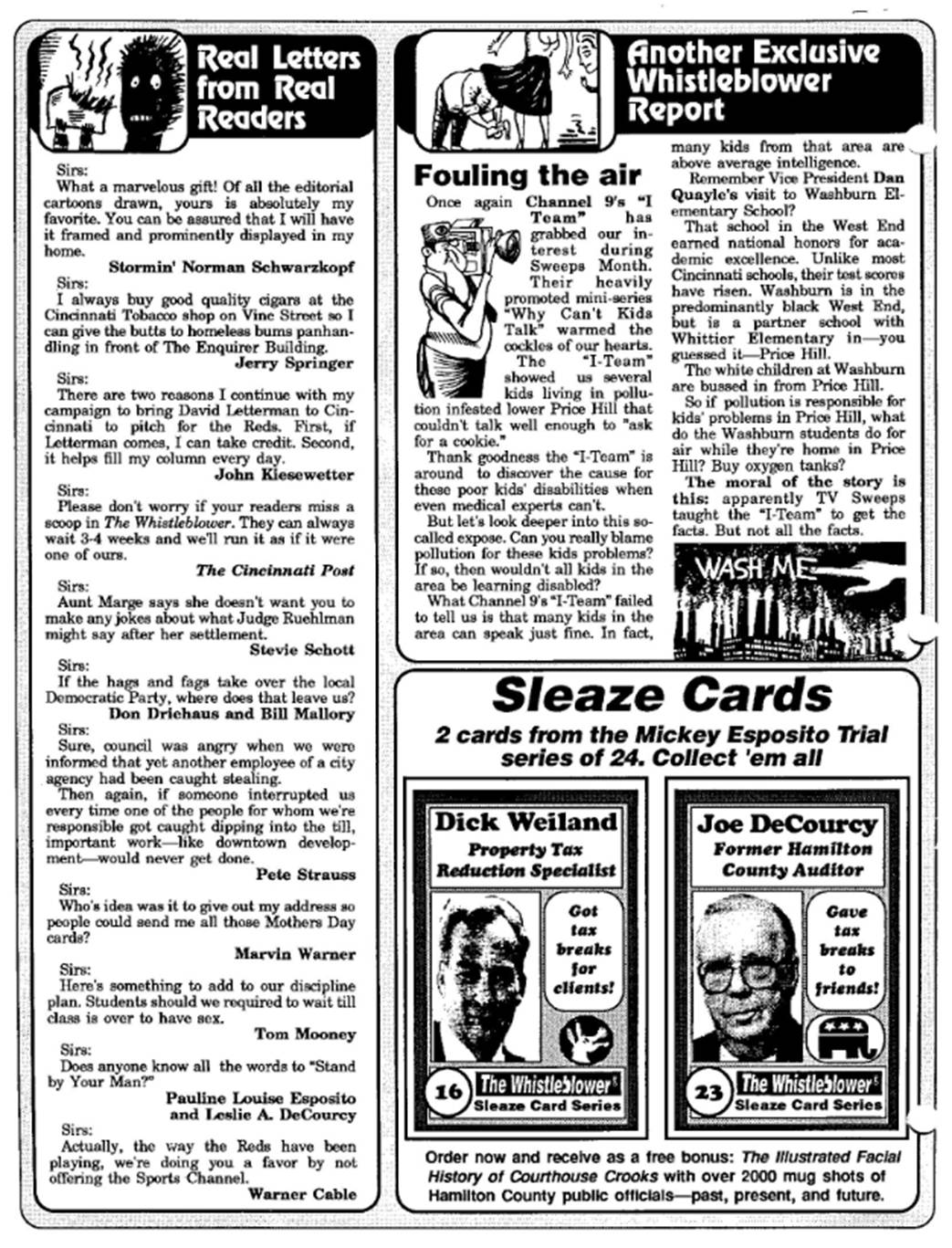 Page Five featured a report on negotiations between Ben Bernstein and Nick Clooney for the sale and relocation of the Mike Fink along with nudes at La Madame’s in Covington in Ken Camboo’s Bluegrass Holler column, then Northern Kentucky Bureau Chief J.R. Hatfield told us about the Frankfort Follies at the recent Northern Kentucky Chamber of Commerce meeting, and the opening of the all new $4.65 Million Campbell County Jail in Newport.

And Page Six included Real Business News by Hank Dorfman, and in Real Gossip by Linda Libel, we heard about the Greater Cincinnati Restaurant Association’s annual “Best of Taste” competition and a promo for the Whistleblower’s upcoming Centi-centennial Edition coming up in two weeks. 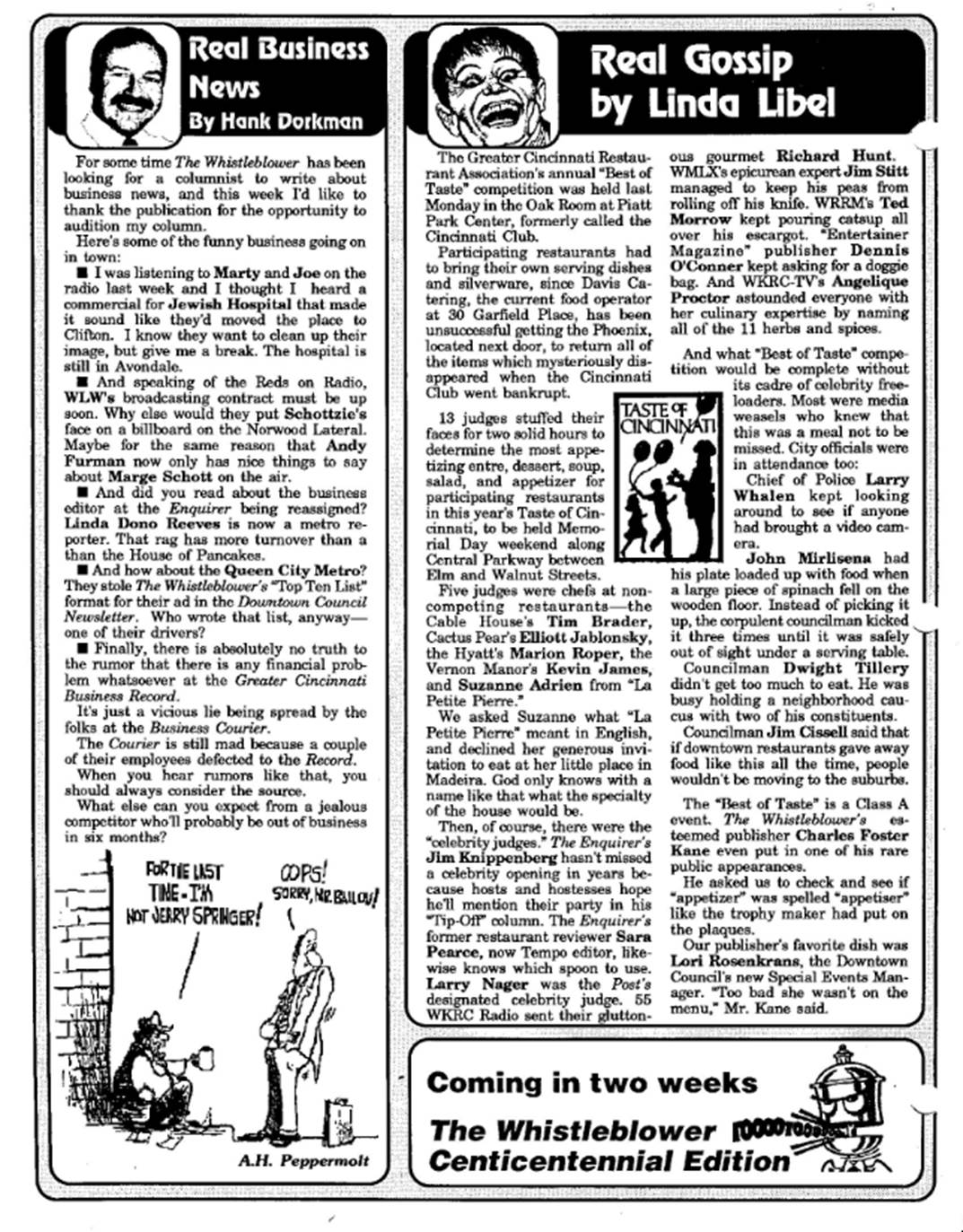