TODAY IS
THURSDAY, MAY 19, 2022
TRUMP’S FOUR-HUNDRED-AND-EIGHTY-FOURTH DAY OUT-OF-OFFICE
AND DON’T CHECK YOUR IRA TODAY. IT WON’T BE A PRETTY SIGHT 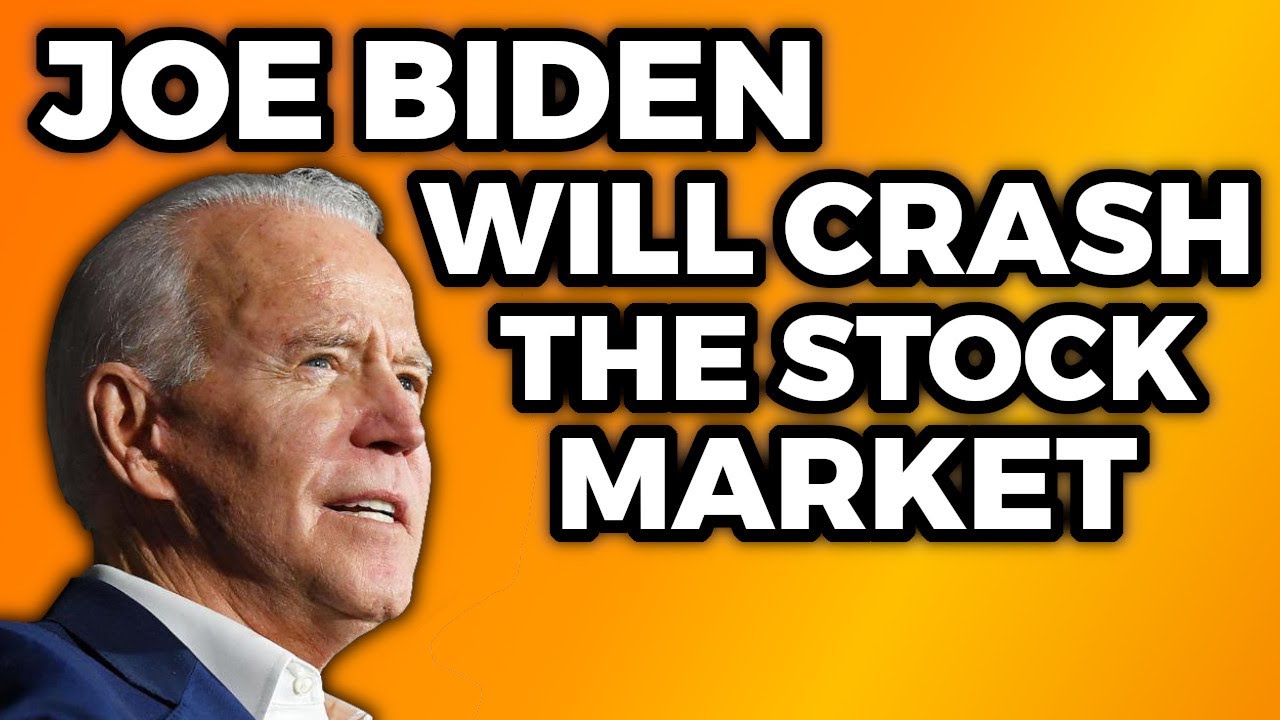 Edition #51 (published on May 21, 1991) of the original printed edition of The Whistleblower (not the Newswire) was delivered to Persons of Consequence all over town.

The Really Big Story was about the Queen’s refusal to visit Cincinnati on her upcoming tour of Kentucky during the following week.  The Top Ten List was the top ten excuses Pete Marino used to explain why his law license was yanked after an investigation showed his bar exam scores had been altered, an announcement about the Whistleblower Hotline, and notice that Mickey Esposito’s trial had been delayed. 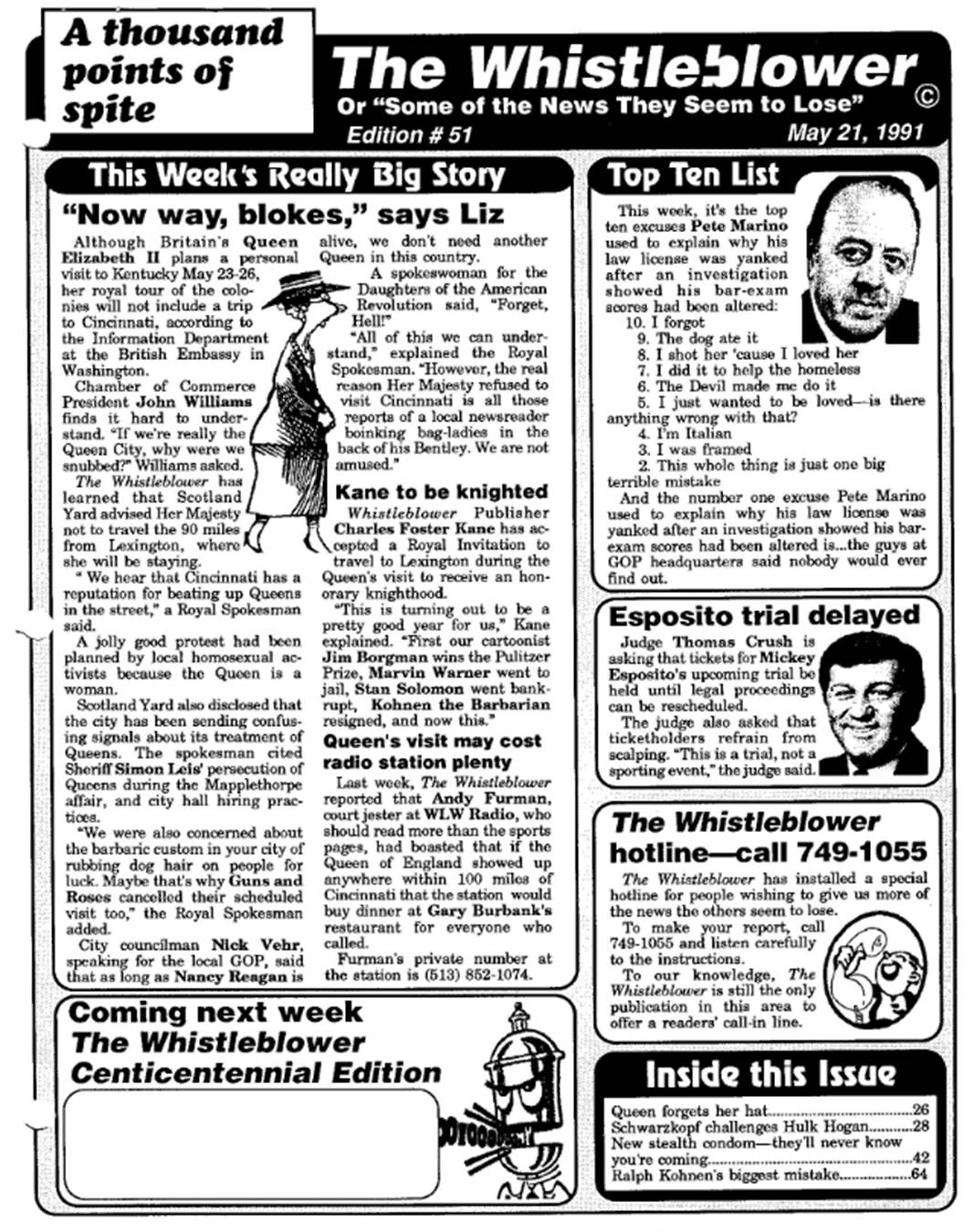 Page Two with Real Editorials by Publisher Charles Foster Kane muddying the waters over putting Charter amendments on the ballot, abusing the abuse issue, and how the world-class media whores at NewsChannel 5 had topped themselves during the past week; Real Facts told how Judge Gilbert Bettman laughed former Madeira Mayor T. Jeffrey Corcoran’s $6 million libel and slander suit out of court;  and there was a new Whistleblower Wisdom installment. 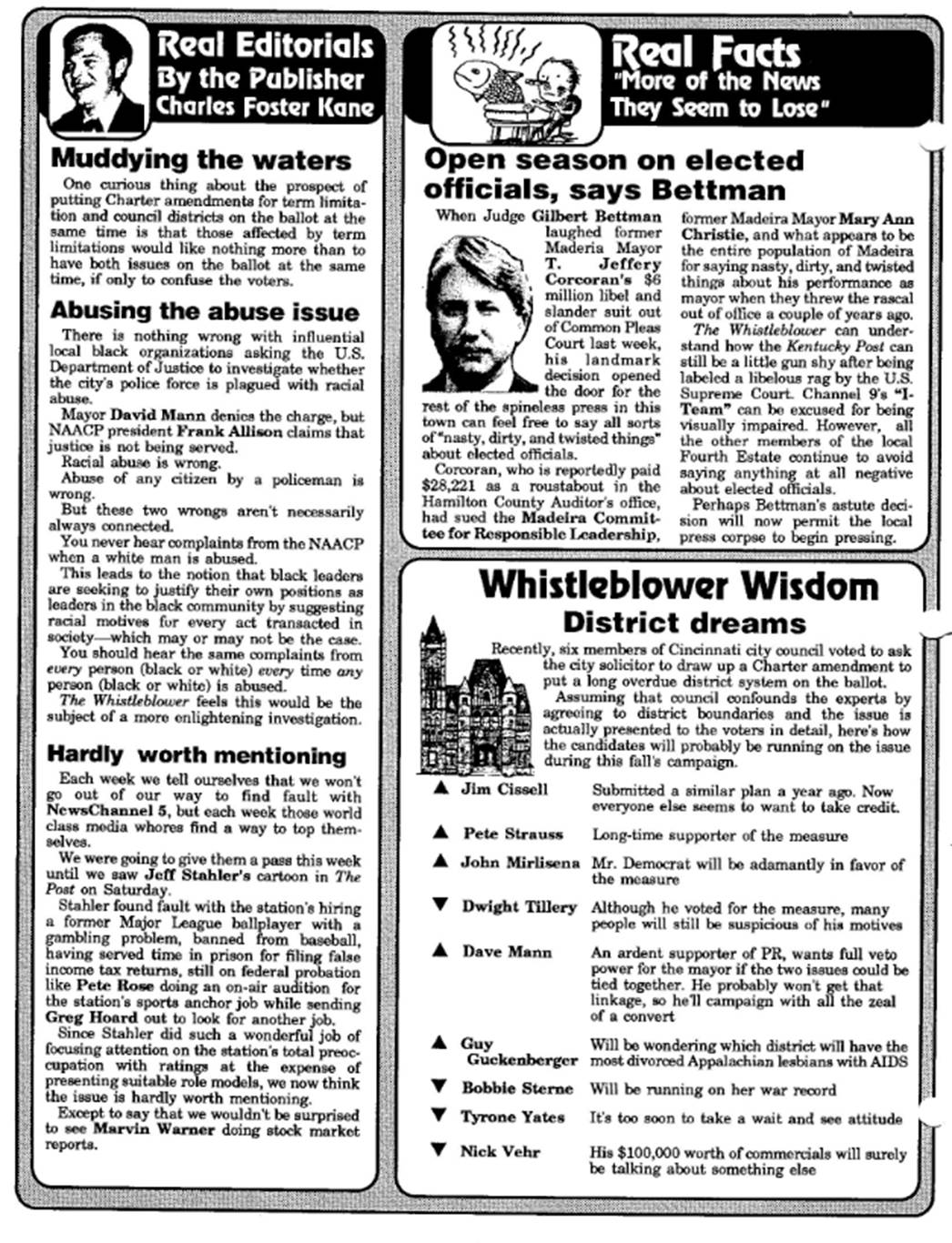 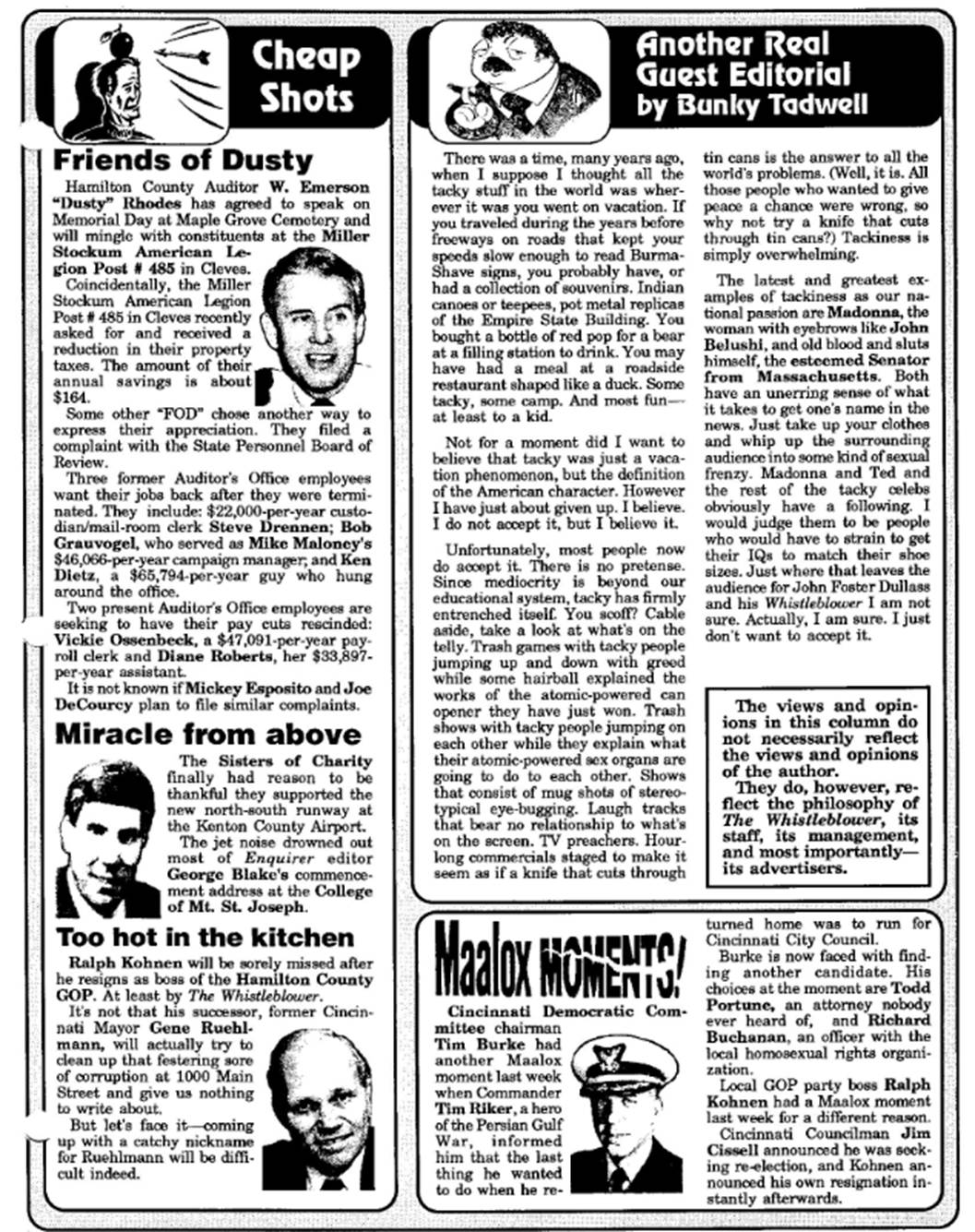 Page Four was for our regular weekly Real Letters From Real Readers column, Another Exclusive Whistleblower Report told about battle lines being drawn over a proposed couty tax increase, and we all enjoyed At The Dirty Movies With Frank Weikel and Si Leis. 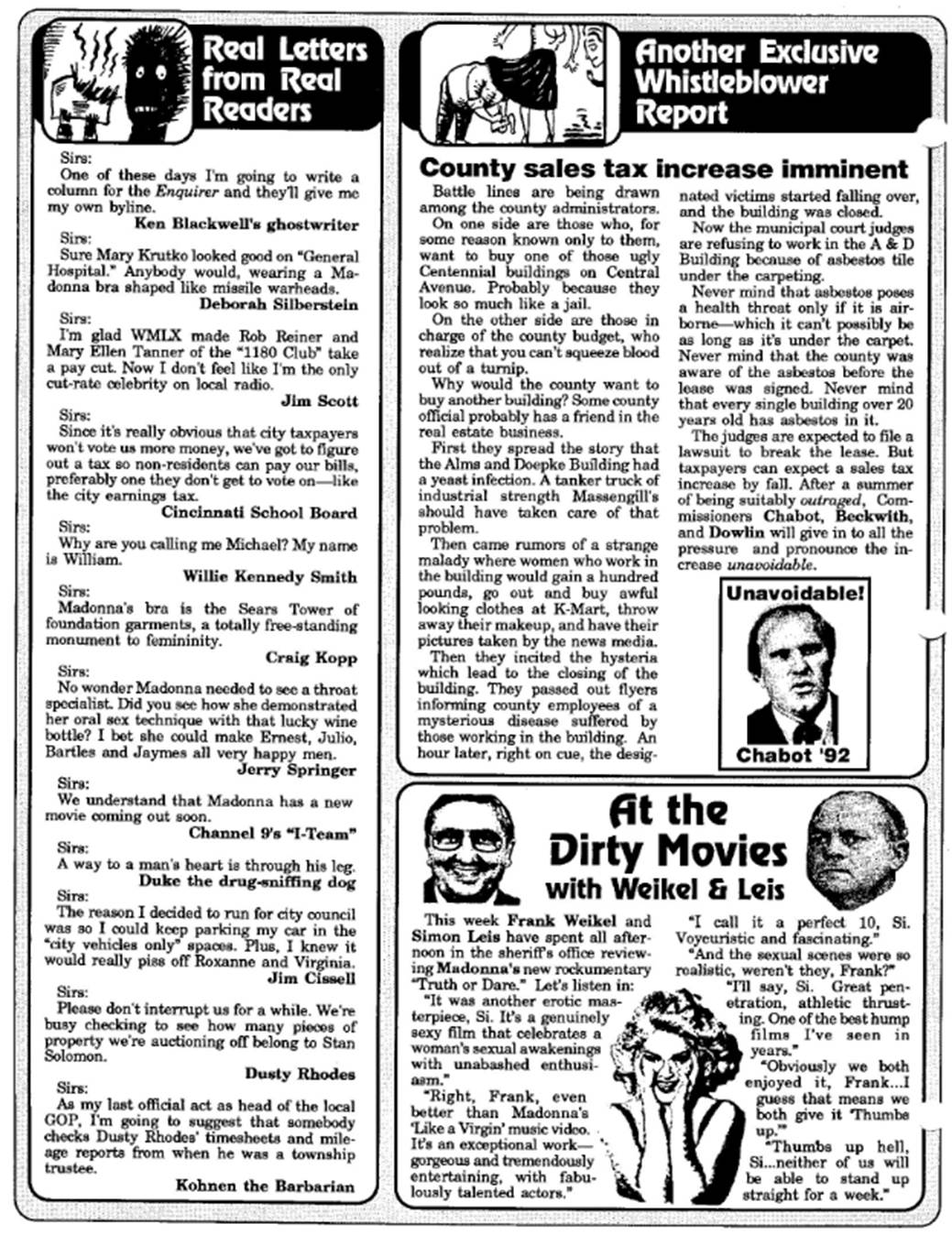 Page Five featured rumors about the sale of the Mike Fink, how things could have been wurst at the Mainstrasse Village Association luncheon, and reasons why Billy Ray Manning decided to back away from plans to reopen La Madame’s in Downton Covington in Ken Camboo’s Bluegrass Holler column, then Northern Kentucky Bureau Chief J.R. Hatfield told us about the Frankfort Follies involved with the upcoming primary elections. 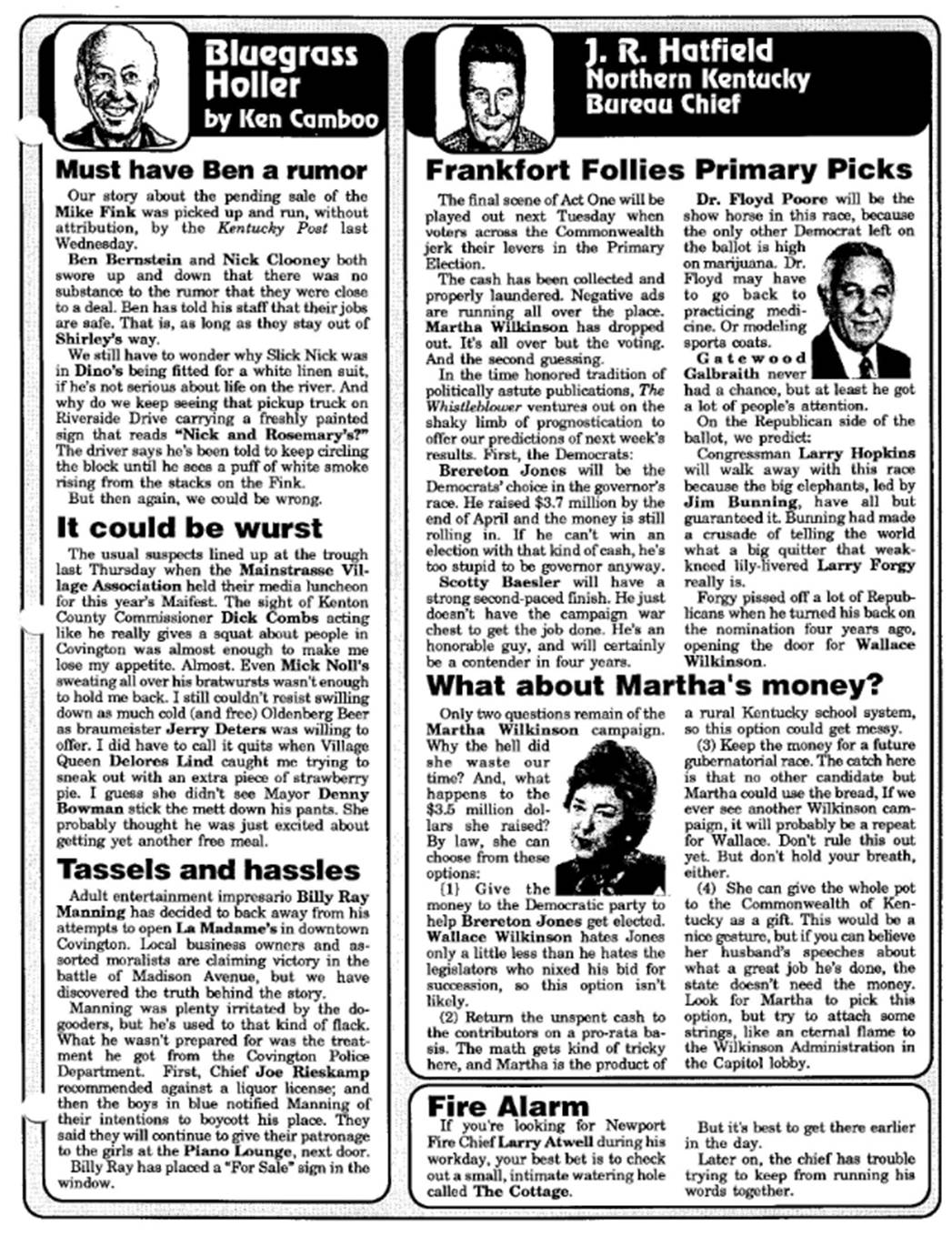 And Page Six included Real Business News by Hank Dorfman, and in Real Gossip by Linda Libel, we heard the latest about folks like Nick Vehr, Bob Taft, and Nell Surber. How long has it been since any of them have seen their names in print? 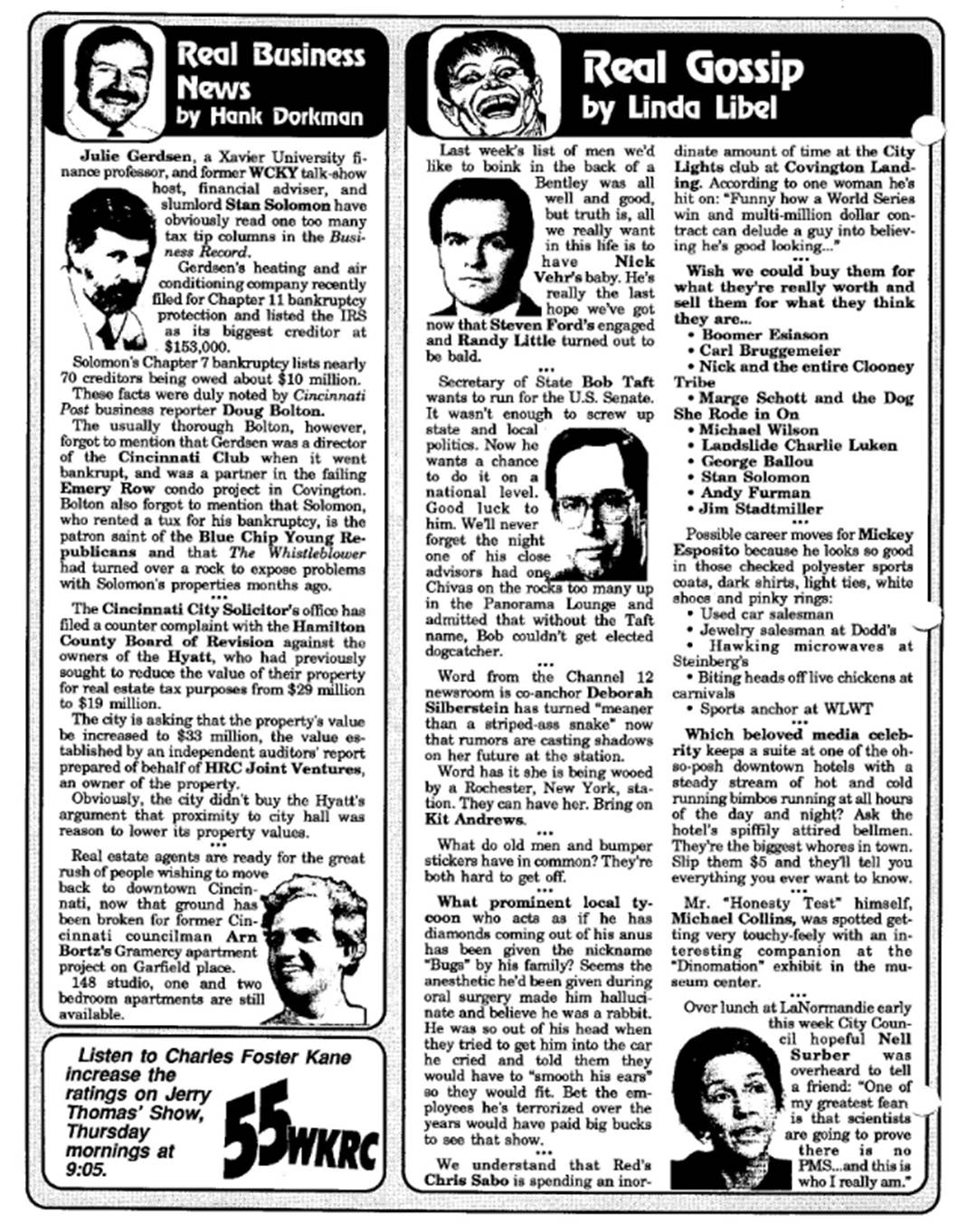 It’s really hard to believe how good The Whistleblower was in those days.
You can download that entire edition here.