TODAY IS
SUNDAY, APRIL 24, 2022
TRUMP’S FOUR-HUNDRED AND FIFTY-NINTH DAY OUT-OF-OFFICE
AND IS ILLEGITIMATE RESIDENT JOKE BIDEN*S AMERICA TOTALLY SCREWED UP OR WHAT 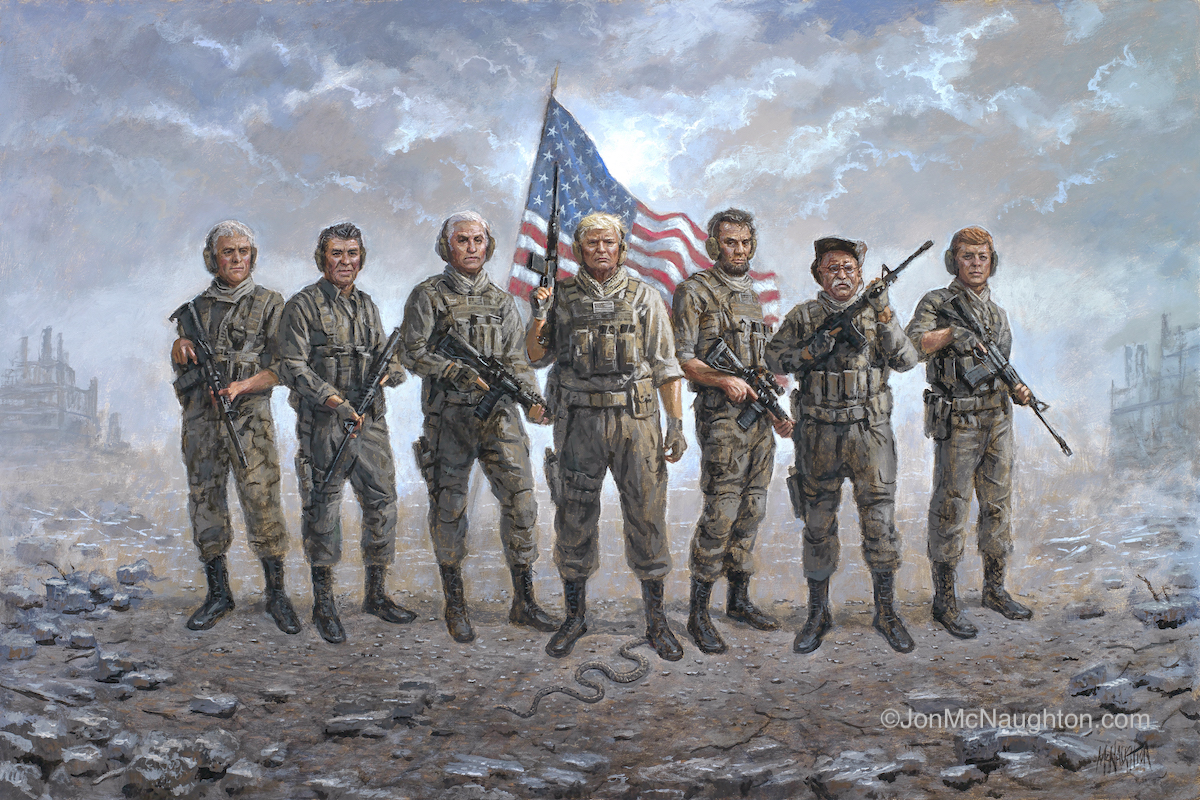 There have been 46 US Presidents since George Washington: some good, others not so much. As the artist, I decided to put together my team of the most magnificent seven Presidents. How did I choose this motley crew? Each was loved and hated for different reasons, but all stood against the establishment and to fight for American ideals. These are – The Magnificent Seven!

History Should Be Our Guide
in Ukraine
Ukraine can defeat Vladimir Putin’s
Expeditionary army if the West remembers that history is not on Putin’s side. Says VICTOR DAVIS HANSON

There are several historical referents we should keep in mind about the Ukraine war.

First, no-fly zones. Lots of Westerners are calling for NATO aircraft to establish a no-fly zone above Ukraine to stop the Russian bombing of Ukrainian cities.

That is a terrible idea. Russian planes can still launch missiles from the nearby airspace of Russia and Belarus. No nation in history has declared a no-fly zone against an adversarial nuclear power.

No-fly zones are best known for the 12-year air block over Iraq in between the two Gulf Wars.

NATO also imposed a no-fly zone over Bosnia and Herzegovina in the 1990s, and again over Libya in 2011.

These efforts were aimed respectively at the bloody though small-time dictators Saddam Hussein, Slobodan Milošević, and Muammar Gaddafi. None had nuclear weapons.

The United States never attempted a no-fly zone against either nuclear Russia or China during the Cold War—despite a long history of these countries supplying wartime enemies of ours.

No nation wishes to risk Armageddon over the skies of a third party.

Second, regime change. There has been a lot of wild talk—from Joe Biden and various U.S. senators on down—about removing or assassinating Vladimir Putin to achieve “regime change” in Russia.

Here too, the United States has a mixed record, at best—from the engineered ouster of Vietnam’s Ngǒ Đình Diệm to Muammar Gaddafi in Libya. Efforts to kill Fidel Castro boomeranged in ways that likely still remain classified.

Dozens of Cold War-era forced removals of hostile heads of state in Asia, Africa, and Latin America often did not achieve objectives that were in long-term U.S. interests, much less did they achieve regional stability. Such coups and hit jobs did, however, tarnish America’s claim to the moral high ground.

In chicken-and-the-egg fashion, do odious dictators really hijack power from oppressed societies, or are they simply emblematic of them? Before Putin, were there democratically elected czars, Soviet premiers, or post-Cold War Russian strongmen?

Once Western liberals talk sloppily about removing heads of states, such authoritarians naturally will do the same. Do we really want Vladimir Putin threatening Western presidents, given the past propensity of his political enemies to disappear?

Even idealists are branded as “neocolonialists” and “imperialists.” Even the beneficiaries of liberal democracy still feel it was “imposed” and any gratitude or warm feeling for America is short-lived.

The American public, meanwhile, rails that the trillions of dollars spent abroad could be better used at home. Witness the recent failed 20-year mess in Afghanistan.

Fourth, moral hysteria. The United States does not have a good record of turning wars into moral crusades by branding our allies divine and our enemies satanic.

Ukraine President Volodymyr Zelenskyy has shown himself a gifted and courageous leader who, logically, we should support and supply. But he is not an archangel pitted against evil Russian 18-year-old conscripts or necessarily the moral superior to Russian pianists and tourists.

Millions of impoverished Russians had no say about Putin’s savage misadventure in Ukraine.

That Ukraine is morally in the right and certainly deserves Western help does not mean that all Russians should be demonized or an often-corrupt Ukrainian government that just suspended its opposition parties should be deified.

Fifth, the Russian military abroad. The Russian army is historically unbeatable on its home soil. Charles XII of Sweden, Napoleon Bonaparte, and Adolf Hitler all wrecked their once indomitable militaries once they crossed into Russia.

But the expeditionary armies of a multiethnic, disparate Russia have never done well abroad in major foreign invasions against determined enemies.

Moscow faced a series of embarrassing and utter defeats in the Russo-Japanese war of 1904-1905.

The czar’s 1914 invasion of German East Prussia ended in catastrophe. Russia invaded Poland and lost the Polish war of 1919-1921.

Stalin’s attack on tiny Finland in 1939 soon turned into a bloody quagmire. The decade-long invasion and occupation of Afghanistan ended in defeat.

Given these past realities, Ukraine can defeat Putin’s expeditionary army if the United States and its NATO allies increase aid, do not embrace no-fly zones or other provocative trajectories to World War III, cease crazy talk of killing or removing Putin, stop whipping up hatred of all things Russian, and remember that history was never on Putin’s side when he invaded Ukraine. 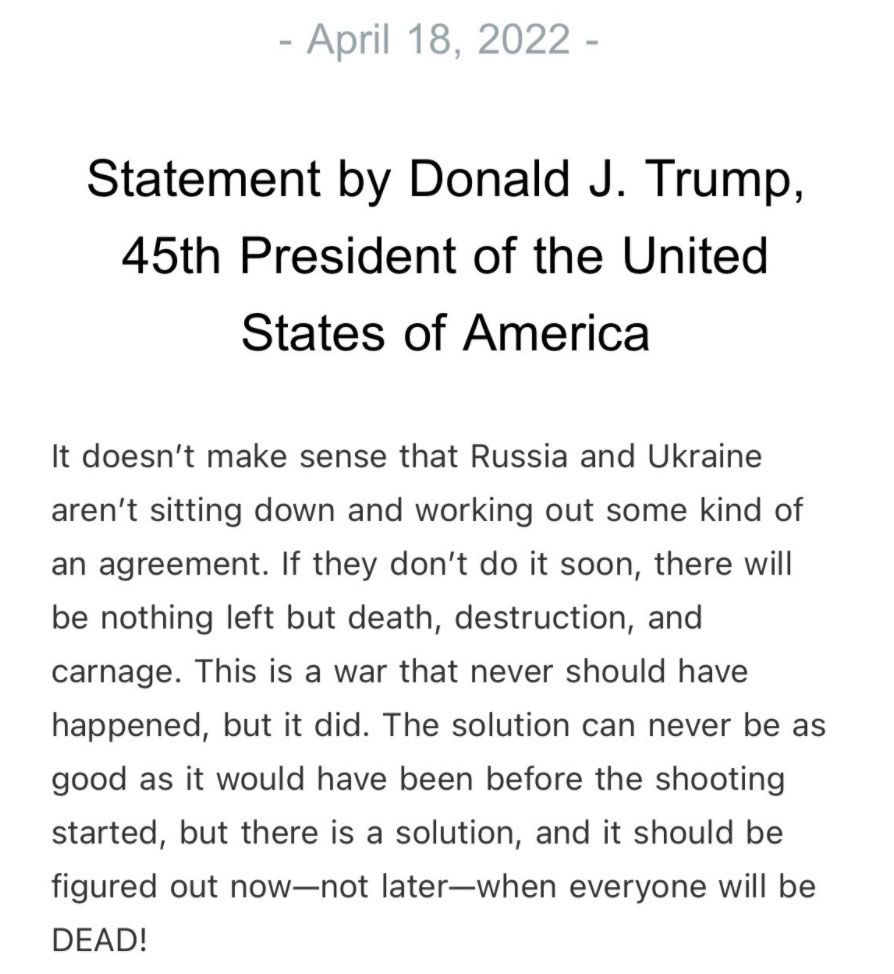