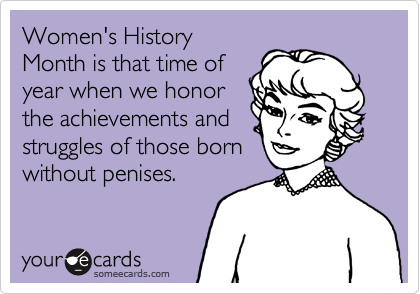 It’s hard to believe that Women’s History Month is nearly 42% gone, and so far The Whistleblower has only been able to mention a smidgen of the worthy women we had wished to honor, including all those floozies Jerry Springer would still like to boink, Black Women Victims about to be evicted from the bankrupt restaurants, Convicted Ditzy DemocRAT Juvie Judges waiting to serve their sentences, Left-handed Lithuanian Lesbians, and young girls with Major Yabbos on Florida beaches during Spring Break.

Regretfully, we never did get around to honoring Republican women during Women’s History Month, since the Republican Party is proud to have played a leading role in securing women’s right to vote. Hurley the Historian says when Susan B. Anthony defied the law and voted in 1872, she proudly voted the Republican ticket. She and other suffragists worked with her friend Republican Senator A.A. Sargent to introduce the 19th Amendment. And it took a Republican Congress finally to pass it in 1919.

And although you’re not likely to hear it from any of those Obama Supporters in the Press, Republicans continue to offer a positive agenda for America’s women, as they work to create more job opportunities, lighten the tax burden, and reduce the cost of healthcare. GOP policy goals are driven by the desire to do what’s best for women—not by scoring cynical political points for free condoms, birth control pills and abortions.