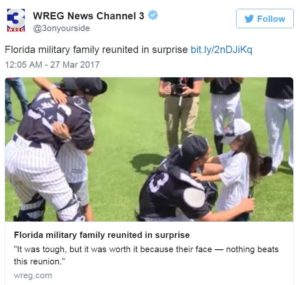 Whistleblower Senior Spoiled Sports Editor Andy FurBall says the New York Yankees pulled off their best play of spring training Sunday in Tampa with a catch. Actually, it was a pair of catchers.

According to Barry Werner at Fox News Sports, ten-year-old Daniel Gomez and his 5-year-old sister Isabella arrived at the game thinking they would see a message from their parents on the scoreboard. The children are living with their grandparents in Tampa while their parents, Chief Warrant Officer Jose Gomez, and Capt. Elizabeth Gomez, are deployed in Iraq and Kuwait, respectively. The children and their parents have been apart for nine months. So, while the children expected to throw out a first pitch, a pair of “players” in catcher’s equipment hustled onto the field. (MORE)

The children were told their two catchers would be Yankees players. That was a fib. After 10-year-old Daniel tossed a strike and 5-year-old Isabella bounced her pitch, the catchers removed their protective masks and unveiled themselves. Elsa Ramon and Peter Daut report

“This is really crazy,” Daniel said later during a brief news conference. “I don’t believe this is happening. “I thought it would be the Yankee players and then when I saw them come out, I’m like ‘OK, now this is, it went too far now.’ I just started crying. I was just like bawling my eyes out.” Capt. Elizabeth Gomez captured the moment perfectly: “Nothing beat this reunion,” she said. 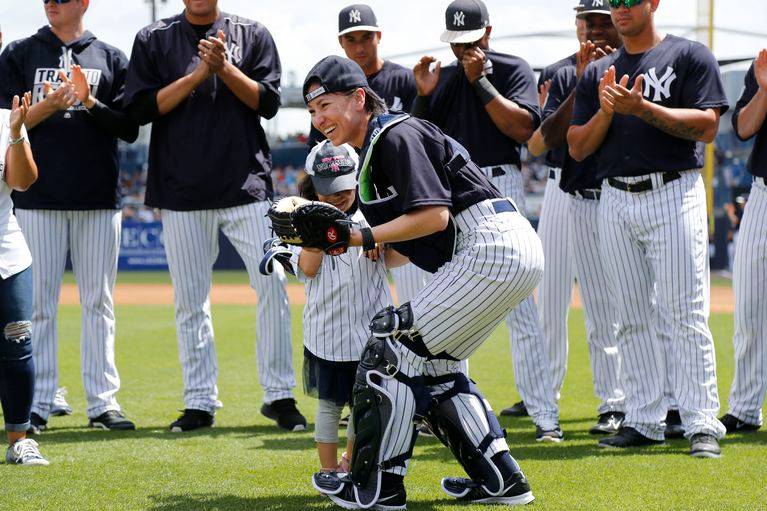