TODAY IS
THURSDAY, MAY 12, 2022
TRUMP’S FOUR-HUNDRED AND SEVENTY-SEVENTH DAY OUT-OF-OFFICE
AND IS ILLEGITIMATE RESIDENT JOKE BIDEN*S AMERICA TOTALLY SCREWED UP OR WHAT 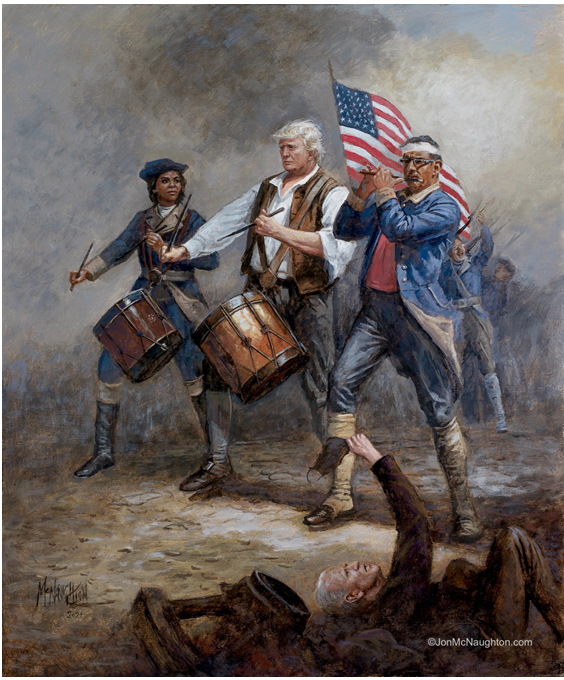 The Exasperated American
“Will the voters channel their furor at this regime of lies into an unprecedented turnout at the polls in November?” says Victor Davis Hanson

A large majority of Americans now have no confidence in Joe Biden and his administration, which often polls below 40 percent, with negatives nearing 60 percent.

Despite the 15-month catastrophe of his regime, the level of his unpopularity remains understandable but still remarkable. After all, in 2020 voters already knew well of his cognitive deficits and the radicalism of his agenda. They saw both clearly starting in 2019 and during the 2020 Democratic primaries, the primary debates, and the general election.

So what did Biden’s voters imagine would happen when a cognitively challenged president, controlled by hard-Left subordinates, entered office—other than what he has done?

Now, as then, the media is fused to the progressive agenda and does—and did—its best to turn a non-compos mentis Biden into a bite-your-lip centrist empath in the Bill Clinton “I feel your pain” mode.

The American people know that on every occasion their president speaks, he will slur his words at best. At worst, he will have little idea where he is, where he has been, or what he is supposed to be saying or doing. When he is momentarily cognizant, he is at his meanest, or he simply makes things up.

Our new normal of a mentally incapacitated president is not entirely new in American history—Woodrow Wilson was an invalid during the last months of his presidency. But Wilson’s condition was well hidden. Quite novel is the idea that the American people know the man in the White House is cognitively disabled and simply expect him to confirm that bleak diagnosis each time he opens his mouth.

If Donald Trump exaggerated, Biden flat out lies daily. His most recent untruth was his assertion that the MAGA movement represents “the most extreme political organization that’s existed in American history.” Biden cannot really believe that roughly half the country is now more dangerous than Antifa, Black Lives Matter, the Weathermen, the American Nazi Party, the American Communist Party, and the Ku Klux Klan. And this comes from the mythically moderate “good old Joe from Scranton”?

The bullied people also know the Biden problem has no remedy. The 25th Amendment that Democrats and the Left raised nonstop in efforts to remove Trump—from the Rosenstein-McCabe wear-a-wire embarrassment and former Yale psychiatrist Bandy X. Lee’s congressional tomfoolery to the incessant Montreal Cognitive Assessment demands—won’t apply to Biden.

Either the media will continue to rebrand his incapacity as Ciceronian eloquence or it will privately gloat that Kamala Harris is so off-putting, so uninformed, so unpopular that the people would prefer an amnesiac Biden to a nonimpaired Harris. The truth is the three doyens of Democratic progressivism—Joe Biden, Senator Dianne Feinstein (D-Calif.), and House Speaker Nancy Pelosi (D-Calif.)—all struggle with cognitive decline and rely heavily upon the media and the Democratic Party’s political attack machine to enjoy asymmetrical exemption. (Though, in Feinstein’s case, her support is wavering.)

Americans feel there is no remedy for this downward spiral until November. To get a sense of their dilemma, imagine a Richard Nixon in 1973 caught lying during Watergate but with Spiro Agnew waiting in the wings without a trace of scandal—except with one difference: the current media is now attacking not the president’s shortcomings, but the president’s critics who point them out.

Even if the Republicans were to win a 60-vote majority in the Senate, they would hesitate to impeach Biden simply because Harris is a more frightening prospect. And some Marquess of Queensberry centrist RINOs would not wish to codify the Democrats’ new standard of impeaching an opposition president the minute he loses the House of Representatives in his first midterm.

Most of the country has awakened to the fact that the Trump-Russia collusion story was essentially a Hillary Clinton campaign effort to destroy a political opponent, a presidential transition, and a presidency. And they know Clinton will never be indicted for her conspiracies and racketeering even if her minions rat her out to seek reduced charges for themselves.

That hoax was followed by an impeachment vote over a phone call based on two more lies:
1) the Biden family was neither corrupt nor used Joe Biden’s office as vice president, and his future political career to leverage payments from Ukraine, and
2) Donald Trump canceled military aid to Ukraine rather than sending them critical Javelin anti-tank missiles put on hold by the Obama Administration.

Americans know Google, Facebook, and Twitter censors were all enlisted in the effort to destroy a former president and his outspoken supporters. And they know there is no real remedy unless two or three more enlightened billionaires follow Elon Musk’s lead.

If Roe v. Wade were to be repealed, many Americans in red states will remain appalled that some blue states will allow abortions, especially late-term abortions after 22 weeks. But nearly all will accept the rule of constitutional democracy and thus the states’ rights to make their own laws that do not conflict with federal legislation as passed by Congress and signed by the president.

These red-state citizens know the opposite is certainly not true: blue state officials will do all they can to attack those who disagree with them, who consider abortion the destruction of human life in the womb. Expect more California-style official travel bans.

Americans know that the Department of Homeland Security’s new “Disinformation Governance Board” will, by design, be run by an arch-disinformationist Nina Jankowicz. The board’s entire purpose is to coordinate with the media to brand oppositional expressions as “hate speech” and “mis-, dis-, and mal-information” so that critics preemptively self-censor and moderate their opposition.

In this regard, they know that the Biden regime awards positions of great power in the U.S. government to those who do the very opposite of the intended offices’ purview. The goal is pure nihilism.

Thus, a mythographer and propagandist will adjudicate “truth.” A homeland security secretary will do his best to make the border entirely insecure. The secretary of transportation will see to it that freeways and bridges are not built. The department of energy’s task will be to ensure less energy is produced and its transportation is more expensive and more dangerous than ever. And the secretary of defense will oversee the most humiliating retreat in modern American history in Afghanistan as he cites our chief existential threat to be either climate change or “white supremacists.”

The people know the Left eventually always loses the support of the voters. But leftists still believe they can achieve and retain power, given that they control America’s cultural and informational institutions.

The Left remains hell-bent on radically changing the demography of the United States. And it always manufactures new hysterias—from the claim that Trump was “100 percent responsible” for every American death during the COVID-19 pandemic, to border officers “whipping” innocent illegal aliens, to Vladimir Putin single-handedly causing sky-high gas prices and the worst inflation since the 1970s. Each week brings another prairie fire hysteria. No sooner than it is exposed and refuted, and the Left is on to another conflagration.

Americans have a rough idea that the tragic death of George Floyd was not proof of an epidemic of lethal police shootings of black males. Yet that single death set off the entire woke conflagration of 2020 and, with the hysterias of the lockdowns, has nearly wrecked the country.

Yet in 2021, out of more than 10 million arrests in the United States, police shot about six unarmed black men. The same year, 346 police officers were shot, 63 fatally—to left-wing indifference. Moreover, roughly 8,000 blacks were murdered mostly by other blacks—to callous media and political silence. Thousands of lost black lives mattered little—except the fewer than 1 in 1,000 of that total who were tragically and lethally shot while unarmed by police.

Finally, Americans were angry at the rioting inside the Capitol on January 6, 2021. But they cannot forgive the needless lies surrounding that illegal act in an effort to fabricate an insurrection out of a spontaneous buffoonish riot.

So they recoil at the lies about Officer Brian Sicknick’s death. They are baffled about the silence surrounding the number of FBI informants among the January 6 protestors. They are angry about the lies surrounding the lethal shooting of an unarmed Ashli Babbitt. They don’t understand the refusal to release all videos or communications pertinent to the government’s reaction to the riot. And they do not fathom the disproportionate treatment of those charged with unlawfully entering the Capitol versus those 14,000 arrested during the summer of 2020 when rioting led to more than 35 deaths, some 1,500 police officer injuries, and $2 billion in property damage and massive looting.

They shake their heads when Senator Chuck Schumer (D-N.Y.) directly threatened two Supreme Court Justices by name outside the court, ginning up an angry protest group at the doors. They are baffled that the White House press secretary sees nothing wrong with disseminating the private addresses of Justices to ensure mobs of protestors show up at their homes to intimidate them.

Of course, exasperated Americans are furious over the open border. They are angry their lives are being insidiously destroyed by the Biden inflation and energy prices. They are humiliated by the Biden debacle in Afghanistan and angrier still over his spiking crime wave and his mean-spirited senility. They resent Biden’s efforts to blame all these self-inflicted miseries on Donald Trump, or the “Putin price hikes” or the inability of a presidency to do anything about supposedly organic forces beyond his purview.

But behind the popular furor is a sense of impotence in the face of the untruth they are assaulted with day after day. In other words, bullied Americans are angry that people who control the nation’s institutions deliberately mislead them and do so because they hate them.

Let us hope that they channel this historic exasperation in November in a manner we have never seen before in the modern era.