TODAY IS
TUESDAY, MAY 03, 2022
TRUMP’S FOUR-HUNDRED-AND SIXTY-EIGHTH DAY OUT-OF-OFFICE
AND ILLEGITIMATE RESIDENT JOKE BIDEN* IS PLANNING ANOTHER MEANINGLESS VISIT TO CINCINNATI ON FRIDAY 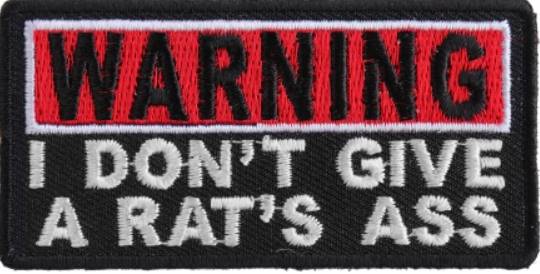 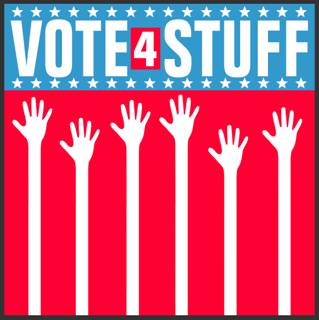 And What We Got Was Just More of the Same
The Bluegrass State will finally hold its 2022 Primary Elections on May 17, after two more weeks of the Blamestream News Media’s declaring voters are “Disengaged” and need to step up and head out to the polls.

Our Feckless Fishwrappers were once again whining about Low Voter Turnout, telling Northern Kentucky to “Get out there and vote to choose between an As Yet Unindicted Corrupt, Scandal-Plagued Liar and a Socialist promising free stuff to his really stupid supporters.

In an article for the Cato Institute, Will Wilkinson said, “If you want to be civic-minded, your duty isn’t to fill in ballots just to fill in ballots. You shouldn’t do it in ignorance, out of emotion, or to win approval from your political friends. Your duty is to vote well — to participate in a way that, at the very least, makes the outcome no worse. 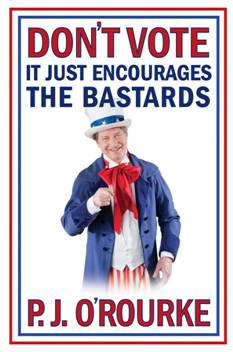 “Everybody has an incontestable and absolute right to his or her vote, but that doesn’t mean it’s always right to vote. Abstaining can be a way of looking after the public good, too. Not all of us have the energy, inclination, or opportunity to learn what we need to know in order to vote well. And that’s OK. There’s more to public-spiritedness than showing up at the polls. You can run a small business or coach a kids’ hockey team with the common good in mind. That’s an expression of civic virtue, too.

“The virtue of opting out is especially clear once you grasp that more voting isn’t necessarily better voting. Specialists in public opinion have exhaustively documented the average voter’s shocking ignorance about the main issues of the day, the names of their local candidates for office, or the policies the candidates support.”

That’s why The Blower believes higher voter turnout only makes things worse — especially when those turning out are ill-informed. Just look what happened when all those Dumbed-Down, Self-Absorbed, Media-Influenced, Celebrity-Obsessed, Politically-Correct, Uninformed, Short-Attention-Span, Free-Stuff Grabbing, Low-Information Obama Supporters Who Put The Positively Worst President in History In The White House—Twice, and Failed Trying To Give Obama a Third Term By Voting For Hillary, and get all of their “fake news” from our Biden Supporters in the Press, like the ones at The Fishwrap and on Channel 5, 9, 12, 19, and Spectrum, actually went to the polls. 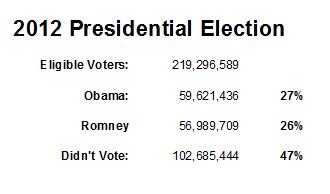 Actually, most people going to the polls these days are too stupid to vote. The Blower has always believed voters should be required to pass a basic civics test before they’re given a ballot. Disingenuous D-RATS would really love that idea. Maybe voting should be done on iPads so voters could touch pictures of the candidates’ faces, like cash registers at fast food restaurants. At least non-voters wouldn’t need more days of “Early Voting” to stand in long lines outside the Board of Elections. 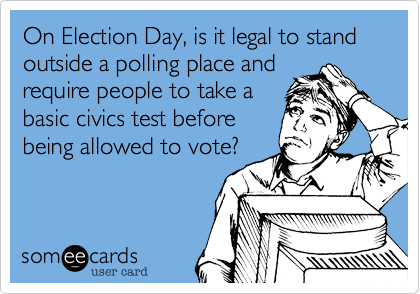 In a Voice of Freedom, Dave Shellenberger wrote that in 2012 “whether non-voters were motivated by morality, a healthy distaste for politics, or a natural apathy, they did their fellow humans a service by staying away from the polls. To vote was to encourage the state by playing its game.

“As usual, the election was followed by advice on how the losing party should attract more voters, and calls for a third party. For those of us seeking liberty, none of this is relevant. The problem is the existence of government. Politics is a symptom of government, and elections are a means of perpetuating the problem.

“If a gang kidnapped you, and invited you to periodically vote on which gang member should be the Chief Kidnapper, would you participate? You might recognize that the issue was your captivity, not the leadership of your captors. The state kidnaps each of us at birth, asserting its authority on the basis of legitimacy it lacks.”

Some people say all states should now include “none of the above” on their ballots, since Nevada has offered its voters a “none of the above” option in statewide races since 1976. Unfortunately, that option hasn’t prevented Nevadans from returning the likes of Disgraced DemocRAT Harry Reid to the U.S. Senate too many times. At least the “None of the Above” Option might a good outlet for Angry Voters, instead of having them protest by staying home on Election Day.

Hurley the Historian says on Saturday’s date in 2000, the bones of President James Garfield’s spine were on display at the National Museum of Health and Medicine, but since then, there’s been little evidence of any lawmakers’ spines in the nation’s capital.

“To vote or vote,” that is the question. Americans have a government they truly deserve.  Just look at the extremes to which people try to get you to vote by telling you “Don’t Vote.”

Still, at yesterday’s meeting of the Conservative Agenda, Political Insiders were asking Beloved Whistleblower Publisher Charles Foster Kane if all states should now include “none of the above” on their ballots. “I’m not really sure,” Kane admitted. “Even if The Fishwrap explained it to the stupid voters in another idiotorial, I’m not sure they’re smart enough to understand what it meant.”

Remember: We never print all the bad stuff we know and certain people ought to be damn glad we don’t, especially especially Ohio’s Non-Voters in Today’s Primary Elections

MORE CONSERVATIVE CARTOONERY
Putting the Right Slant on the News! 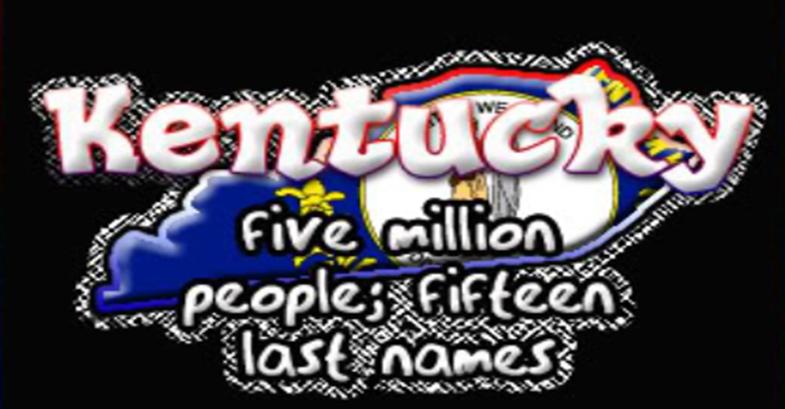 (Sent in by Former WLWT Sports Producer Bill Hemmer, Who Left Town in the Mid-80s to Pursue a Career in the News Business And Has Been Hardly Heard From Ever Since.)

Note: We guarantee iPhone subscribers who don’t go home and see links and pictures on their big-screen computers are not going to appreciate all of this good stuff today.