Today We’re Remembering the 2016 Presidential Campaign When We All Saw Rob “Fighting For Fecklessness” Portman Stab The Trumpster In The Back.

“We’re Really Surprised,” Said Nobody Ever 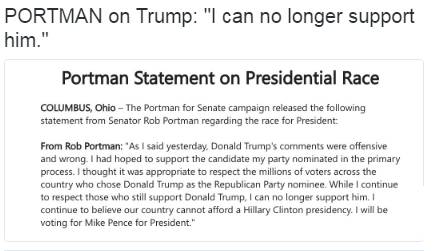 This afternoon at the Conservative Agenda, where everybody was waiting for Biased DemocRAT Debate Immoderators Anderson Cooper of CNN and Martha Raddatz of ABC along with Hillary Supporters planted in tonight’s Second Presidential Debate Audience To Ask 342 Questions About Donald Trump’s deplorable vulgar comments about women 11 years ago to help Hillary, not a single person was surprised to learn Ohio RINO Senator Rob “Fighting for Faithlessness” Portman had chosen “Corruption Over Crudity” and retracted his support for the Republican Party’s Presidential Candidate because of some eleven-year-old locker room banter. Good Grief!

“Portman, perhaps the least productive three-decade Congressman in history, has always thought he should be President,” Beloved Whistleblower Publisher Charles Foster Kane explained. “However, no one can find a single thing he has ever accomplished. Hell, he can’t even repair a federal bridge in his hometown!”

Portman continues in office for one reason.  He raises more money, and does more favors, on Wall Street than anybody else in Washington. If he were only a fraction as skilled at helping unemployed Ohioans as he is in servicing the globalists financing construction in China, it would be our state getting the new factories.

He then buys ads touting the marvelous progress he has made combating drugs! About as successful as anything else he has ever done.

He and Ohio’s Delusional Governor John Kasich are both are a couple of 60-something Presidential wannabes whose hopes demand a Hillary win. These RINOs are a major cause of this backlash crusade to clear out Washington corruption. Of course, Portman and Kasich stand with Hillary and not the millions of Americans who are fed up with all of them.

Hillary boasts that she passed only one piece of legislation and that Kasich was her co-sponsor in the House. When Kasich (and Boehner) went golfing with Obama, he pledged to be the first, and almost only, RINO Governor to create an ObamaCare Exchange. (now broke). No wonder Portman and Kasich are working to sink the Republican ticket.

The Bushes have never said a favorable word about any Republican candidate not in their family. So, it was just a matter of time until the Bushes major toady, Robbie Portman, said publicly what he has always been saying privately. That he, the Bushes (and McCain) prefer Hillary.

Everyone knows Portman and Kasich have said things just as risqué as anything Trump ever said over a decade ago when he was a DemocRAT.

Rob was just waiting for the chance to pounce. A Trump Presidency would mean a pro-life, Pro-natural marriage, pro-gun, pro-Religious Freedom Supreme Court, and no President Portman.

For Rob Portman; Hillary has to win!

Trump has proven that he has the strength to conquer the Manhattan unions and the acumen to outsmart the international rip off artists. Just the kind of leadership America needs to protect America’s jobs, reform our collapsing educational system, and defeat ISIS.

Of course this scares our little Buckeye Bedwetters like Robbie & Johnnie. 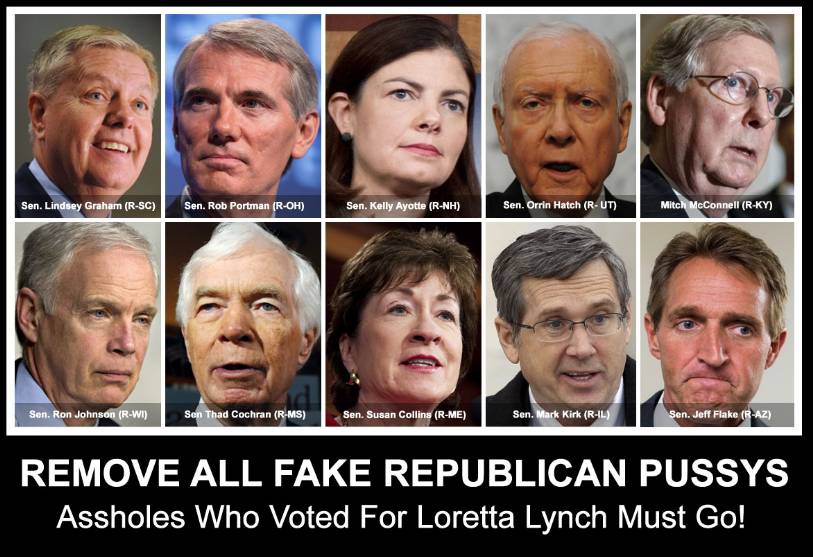