Today We’re Remembering the 2016 Presidential Campaign when We All Saw How Crooked Hilary Was In Cahoots With NBC’s Lester Holt During The First Presidential  Debate.

“Here’s another change that just can’t wait,” Kane explained, “especially after watching Monday night’s First Presidential Debate. Some people say it’s no longer accurate or effective to refer to it as “media bias.” Not only is media bias an inaccurate term, it’s a term that’s been used so often, that people tune it out. Plus what the world witnessed Monday night was a lot worse than just simple Media Bias.

Trump needs to start using the term “Liberal Media Conspiracy,” because we’re dealing with a dishonest “scheme” to mislead the voters.

Last night The Blower showed everybody that video of how Crooked Hillary was in cahoots with NBC’s Lester Holt. She signaled him six times when she was ready with a zinger.

During his opening statement at the next Presidential Debate (October 9 at Washington University in St. Louis), Trump should put Hillary’s Accomplices on the Panel on notice. Maybe he could say something subtle like: “Before I answer any of your questions, I need to make something perfectly clear, because you leave me no choice. Why is it that the viewing audience knows more about a conversation I had with Miss Venezuela 20 years ago than they do about Crooked Hillary`s obstruction of justice and destruction of evidence? The reason is that there is a conspiracy in this country by the corporate media and their allies in the Disingenuous DemocRAT party to keep the public from learning about those very serious crimes.

“It’s a Conspiracy, Stupid!” That’s why we need more accurate and harder-hitting language to expose the Media’s Dishonesty. 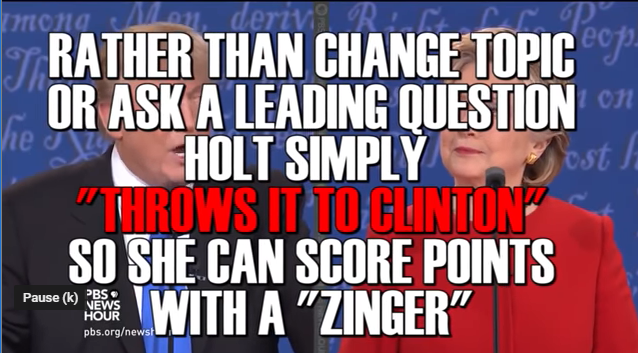 More accurate and more hard-hitting language needs to be used to expose all of that Liberal Corruption.