They’ll Be Making A Movie About This One For Sure

At last night’s big Veterans Day Dinner at the Patriot Center sponsored by the Anderson Veterans Society, everybody wanted to know if it was true that the Ohio Department of Transportation had ruled owners of every business and residence between Markey Road and Eight Mile Road on Beechmont Avenue had until December 31 to change the street name from “Beechmont Avenue” to “PFC James Miller IV and Staff Sergeant Richard T. Pummill Memorial Highway.”

However, Anderson Trustees at last night’s dinner said you wouldn’t believe all those signatures on that petition asking that an appropriate portion of Beechmont Avenue in Anderson Township also be designated as a memorial highway to honor PFC Petkovsky, especially after one of the heroes of that historic “Three Against A Thousand Raid” told his heroic story about how he and two buddies survived that infamous battle at last night’s Veterans Day Dinner. 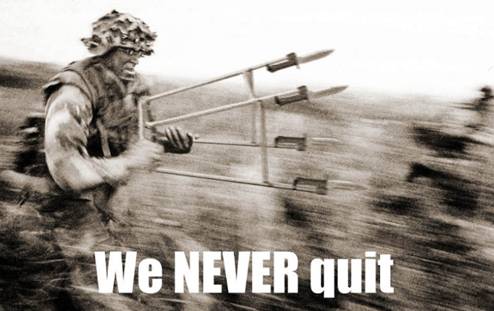 “What a battle, what fantastic odds,” Petkovsky explained. “It never should have attempted it in the first place; it was Three Against A Thousand.”

“First the enemy opened up with an artillery barrage; the shelling was merciless: it was Three Against A Thousand.”

“Then the enemy came with an infantry assault; what ensued was some of the bloodiest hand-to-hand combat in history; it was Three Against A Thousand.”

The audience could hardly believe what they were hearing. “Three Against A Thousand?” someone asked.

“There was blood everywhere,” PFC Petkovsky said, “but we fought on— It was “Three against a thousand.”

Finally one of the geezers in the audience asked, incredulously, “So how did you survive?”

“Well,” said PFC Petkovsky. “It wasn’t easy. They were the three toughest guys we ever fought!”