First Let’s Get One Thing Straight 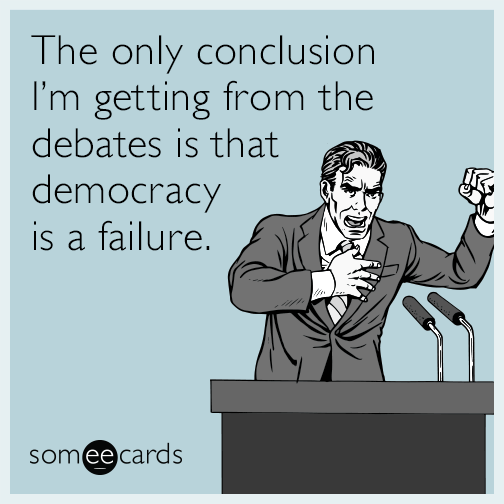 What people will see tomorrow night in Miami (if they’re even bothering to watch) will not be a “debate.” At best, the media circus put on by the Dishonest D-RAT National Committee will be a Joint Press Conference with NBC’s Anti-Trump Moderators Lester Holt, Savannah Guthrie, Rachel Maddow, Jose Diaz-Balart, and Chuck Todd asking a bunch of questions.

Kicking off the race to 2020, the first D-RAT presidential debate of the 2020 cycle will be held in Miami on Wednesday and Thursday of this week. Candidates are expected to take turns batting Hate-Trump Softball Questions out of the park.

Our Long National Nightmare that will surely be the 2020 Presidential Campaign during the next 496 days is officially about to begin, with what could be at best be called a “Joint Press Conference” among half of the top twenty announced Dishonest D-RAT Candidates who will never be president (Cory Booker, Bill de Blasio, Julián Castro, John Delaney, Tulsi Gabbard, Jay Inslee, Amy Klobuchar, Beto O’Rourke, Tim Ryan, and Elizabeth Warren) at Wednesday at 9 PM.

That event will be followed by another “Joint Press Conference” among the other half of the top twenty announced Dishonest D-RAT Candidates who will never be president (Joe Biden, Michael Bennet, Pete Buttigieg, Kirsten Gillibrand, Kamala Harris, John Hickenlooper, Bernie Sanders, Eric Swalwell, Marianne Williamson, Andrew Yang) at another Not Ready For Prime Time Event on NBC Thursday evening at 9 PM.

Four More Candidates who will never be presidents did not even qualify for either of the first two D-RAT Debates include Seth Moulton, Steve Bullock, Mike Gravel, and Wayne Messam (whoever the hell they are).

Hurley the Historian says it’s little wonder Lincoln, Douglas, Kennedy, and Nixon will all be spinning in their graves tomorrow night.

And that’s why our Quote for Today Committee chose Roman poet Juvenal’s: “Two things only the people actually desire: bread and circuses.”

SO, PERSONS OF CONSEQUENCE: It’s time to update your Whistleblower Lexicons. No longer will The Blower use the term “debate” when describing any and all candidate interactions staged by the news media during the remaining 496 days of the 2020 Presidential Campaign. Instead, “Joint Press Conference,” “Not a Debate,” or “Not Really a Debate” will be used.

Finally, just to show you how silly and stupid things will get before it’s finally over, let’s review this classic so-called “debate from the 2012 Presidential Campaign.