TODAY IS
WEDNESDAY, DECEMBER 09, 2020
TRUMP’S 1419th DAY IN OFFICE
AND WHO WAS THAT OHIO MAYOR HOOKED UP WITH A CHINESE SPY IN THE BACK OF A CAR?

Certainly Not Our Diminuitive D-RAT

Edition #29 (published on December 11, 1990) of the original printed edition of The Whistleblower (not the Newswire) was delivered to Persons of Consequence all over town. It was our “It’s Happy Hanukkah time, except on Fountain Square” Edition, and our REALLY BIG STORY was David Mann’s Vision for the City. Our TOP TEN LIST listed the top ten reasons Congress was holding hearings on the Persian Gulf Crisis. Also on the front page, we had an exclusive report about Hamilton County Auditor-elect DemocRAT Dusty Rhodes’ non-invitation from a meeting for “all county elected officials” to discuss the next year’s budget. 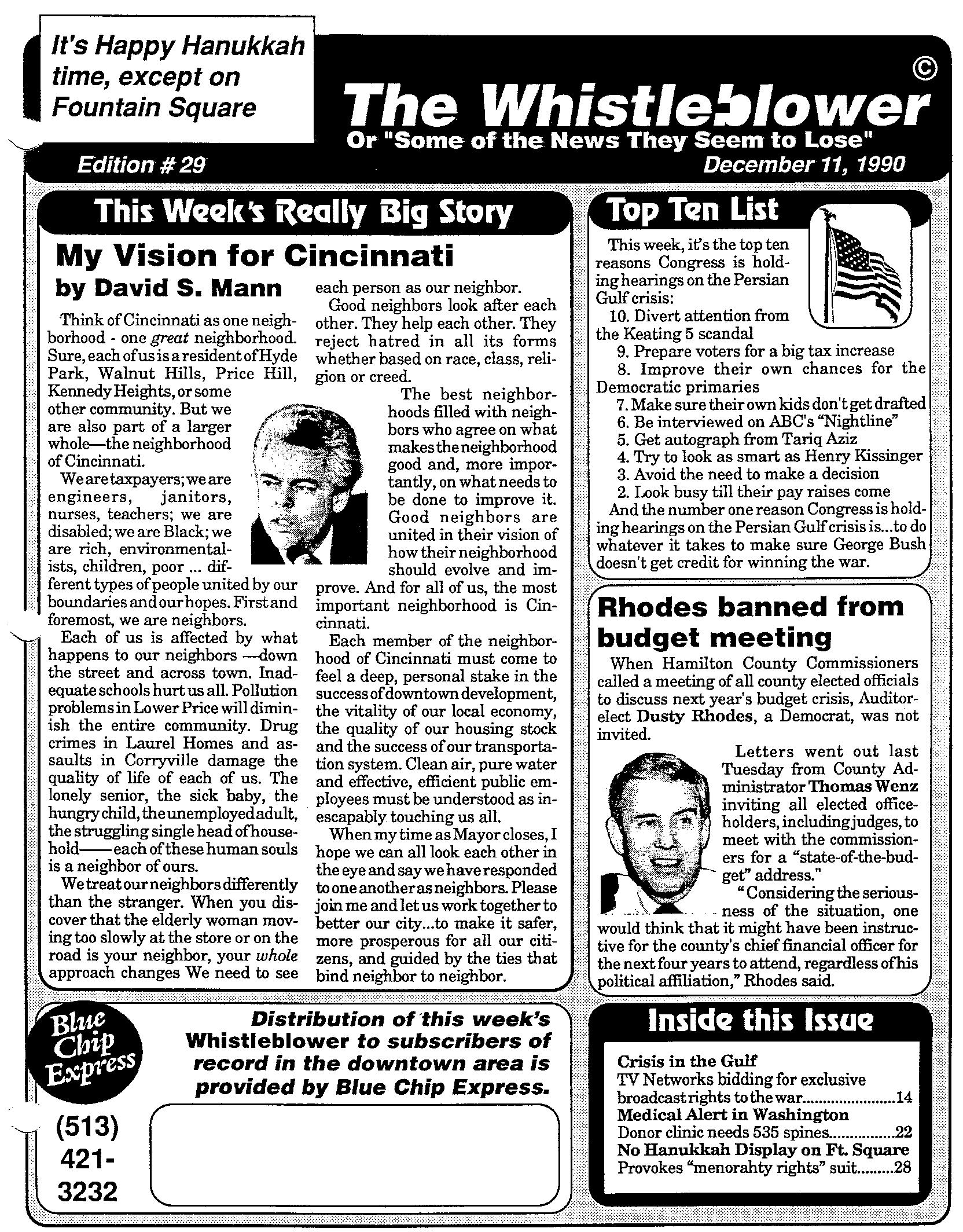 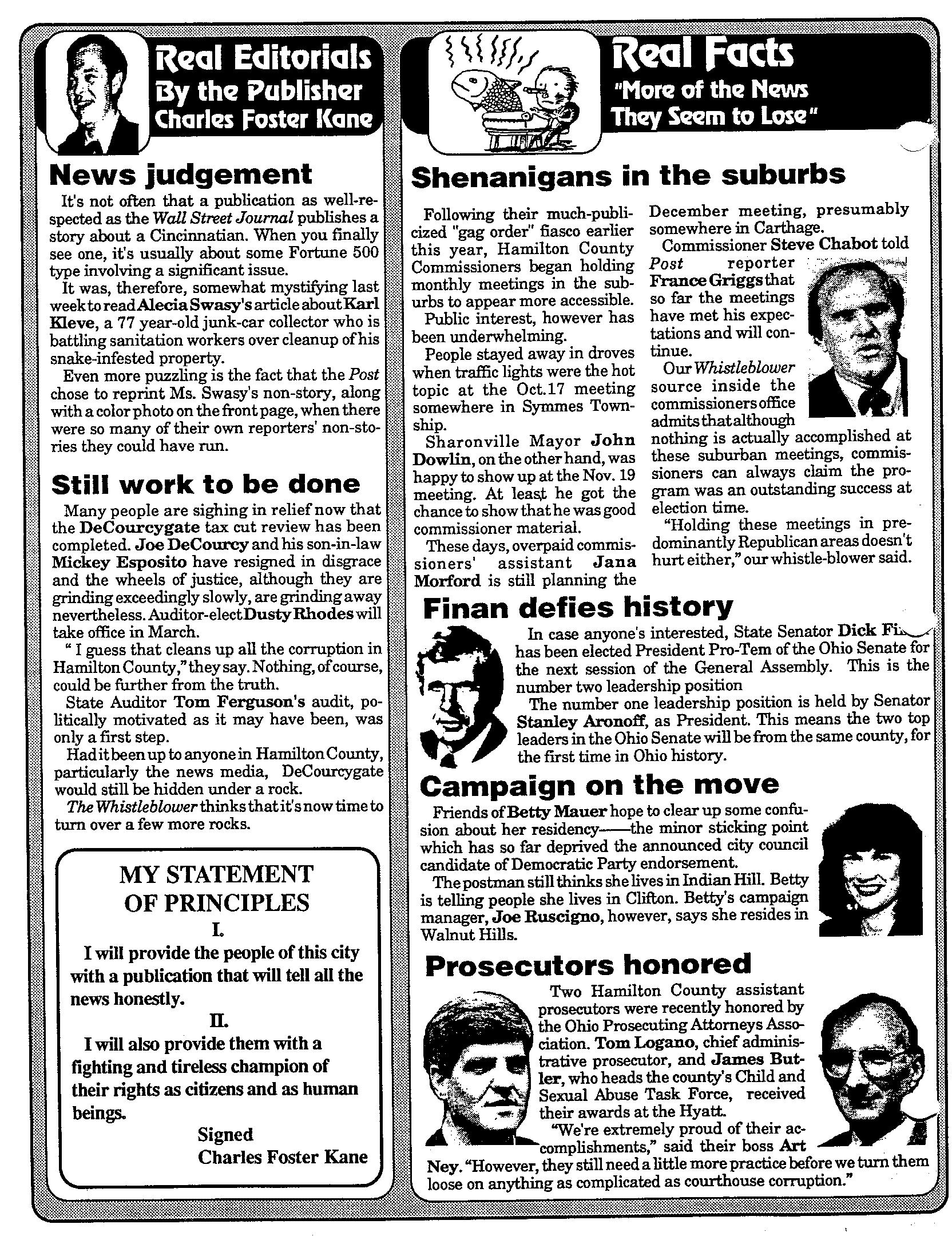 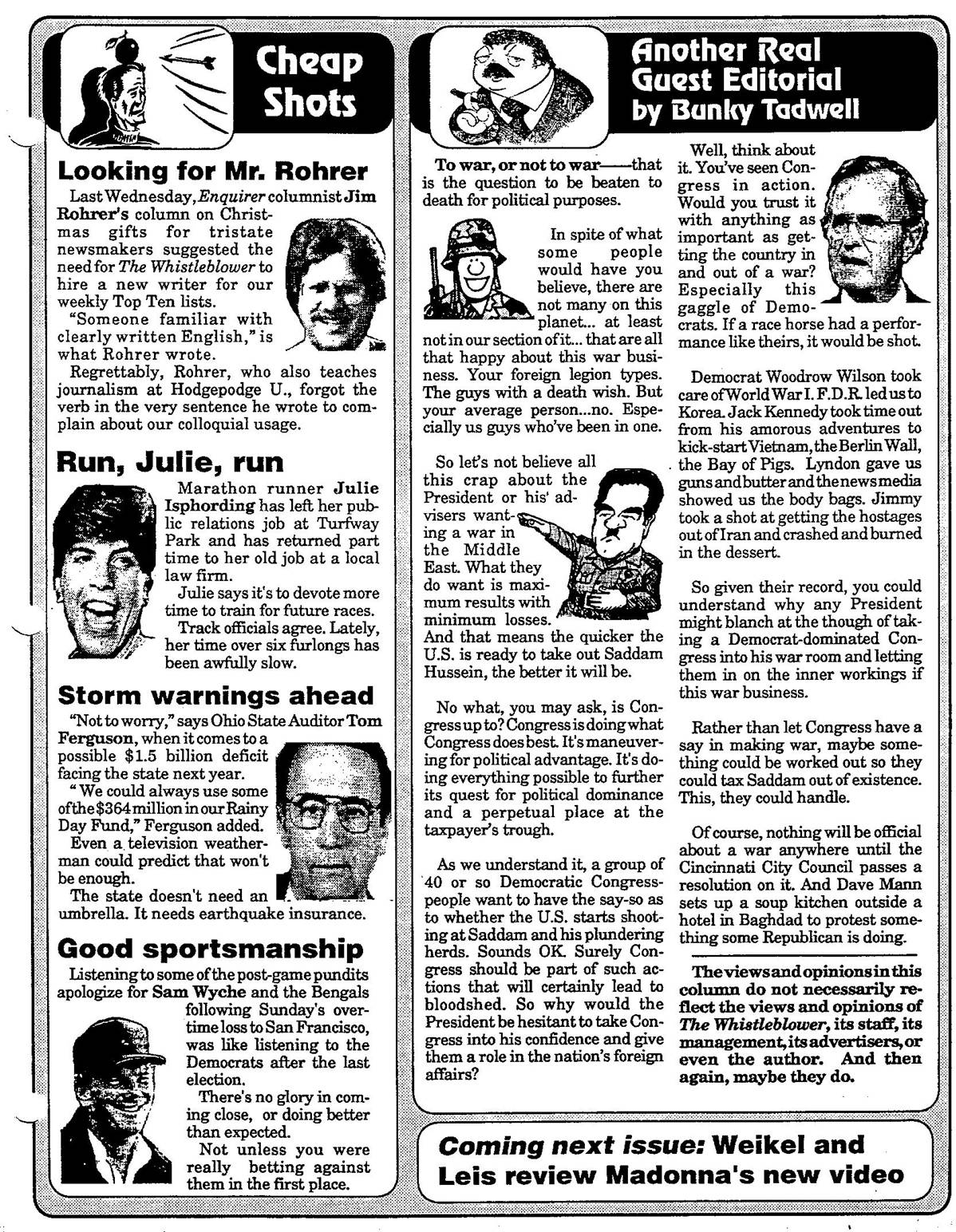 PAGE FOUR featured the REAL LETTERS FROM REAL SUBSCRIBERS, and during all those years, not a single one of those people has ever called to complain that their letter might not have been real. ANOTHER EXCLUSIVE WHISTLEBLOWER REPORT told us about Cincinnati Federation of Teachers President Tom Mooney complaint that it’s hard to teach without books, and Butch LaDeux was that week’s Seediest Kid of All. 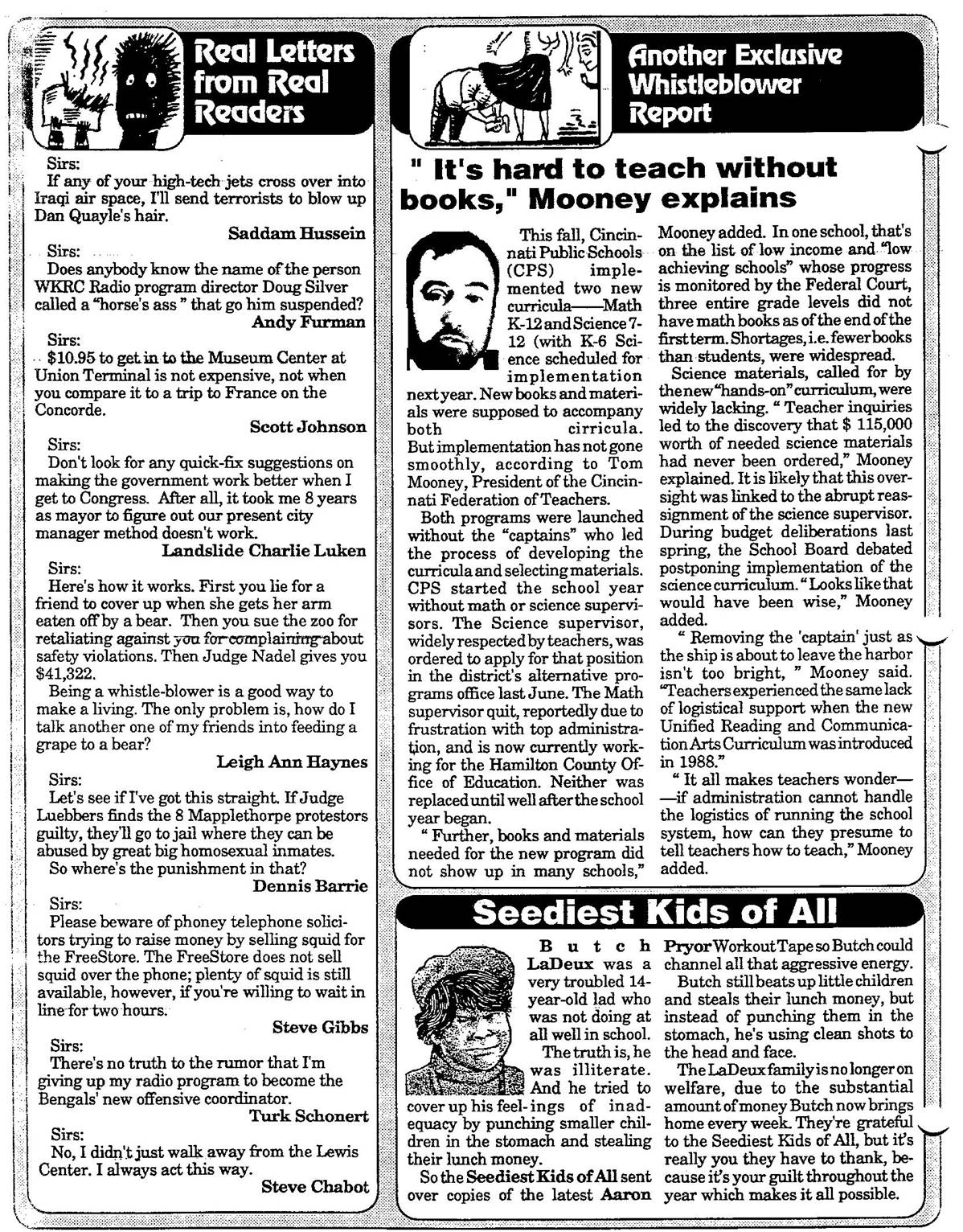 PAGE FIVE featured Bluegrass Holler by Ken Camboo, reporting that the Bluegrass Supreme Court had upheld the verdict that the Kentucky Post was a libelous rag and that Kentucky Post Editor Judith Clabes should be banned for life from working in the newspaper business, Johnny “TV” Peluso’s incompetence plea, and some last-minute gift ideas for Gubernatorial Candidate Dr. Floyd Poore. J.R. HATFIELD offered some revealing glimpses of the world around us, through the world of numbers, ways to get rid of unwanted pets, and NKU’s looking for a few good teeth. 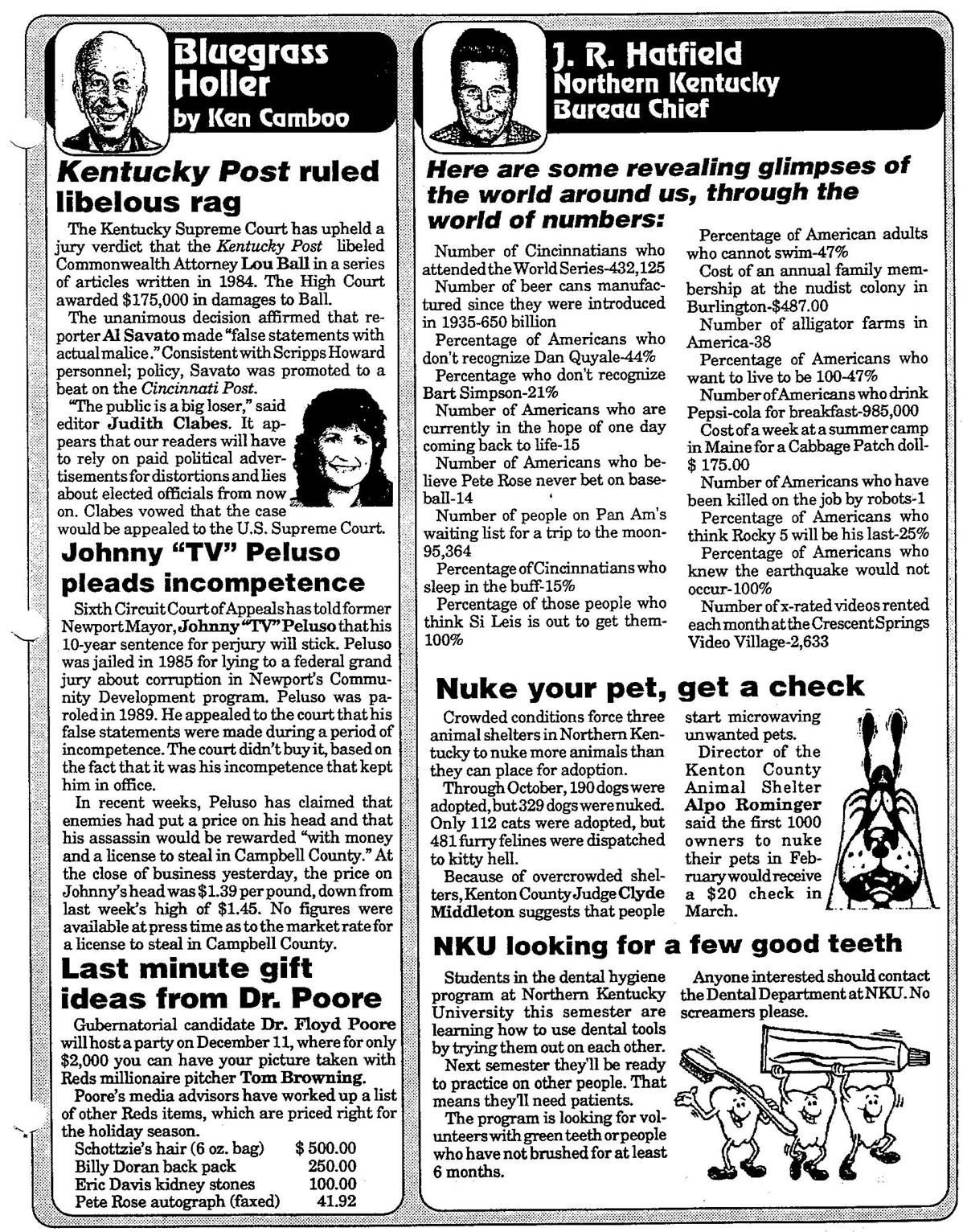 And PAGE SIX included BOOBS ON THE TUBE by John Quichwarmer sure had a lot of names in it, and Bill Backstabbers covered RASCALS ON THE RADIO, while WHISTLEBLOWER WISDOM answered the question: Is there life after Luken (at Cincinnati City Hall). 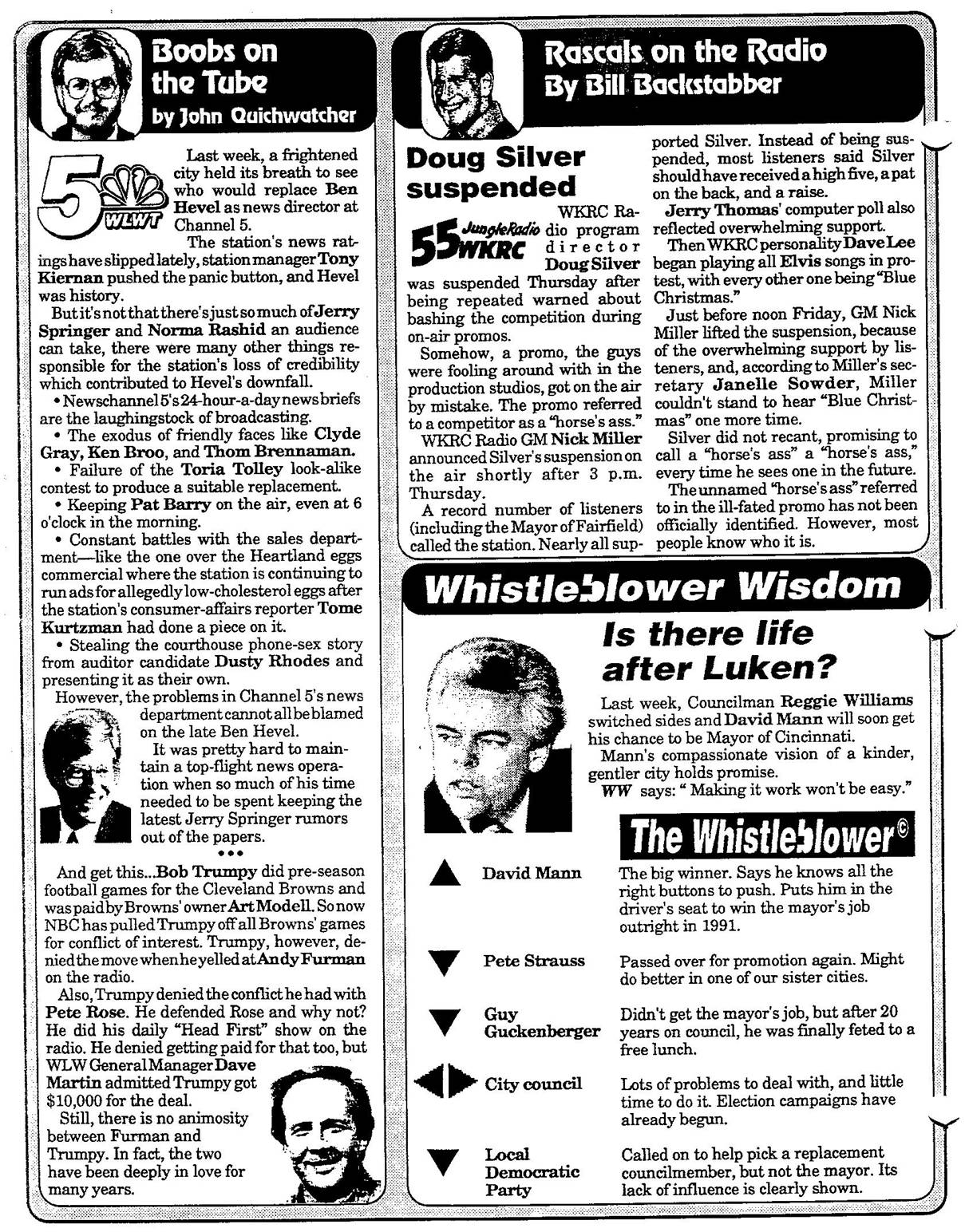