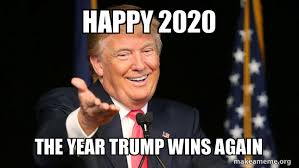 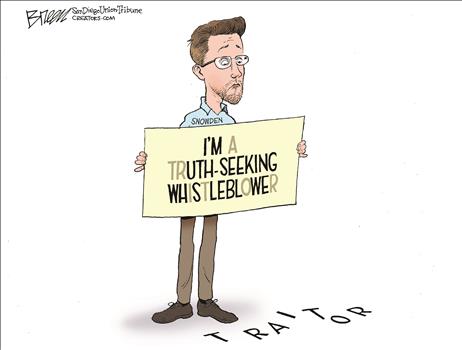 TRUMP FINALLY ADMITS THAT OBAMA IS AN AMERICAN 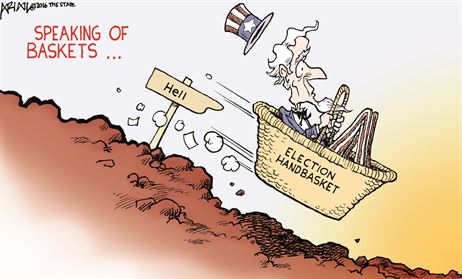 In a major reversal of his 5-year campaign to “prove” that Obama is not a citizen, Trump finally admitted that he is.  Yesterday, when asked directly if he believed that Obama was born in Hawaii, Trump refused to answer.  This was in spite of earlier statement by his campaign manager that he now believes Obama was born there.    He said he just didn’t want to answer that question right now.   Later yesterday, his campaign released the following statement:  “In 2011, Mr. Trump was finally able to bring this ugly incident to its conclusion by successfully compelling President Obama to release his birth certificate. Mr. Trump did a great service to the President and the country by bringing closure to the issue that Hillary Clinton and her team first raised,” Trump 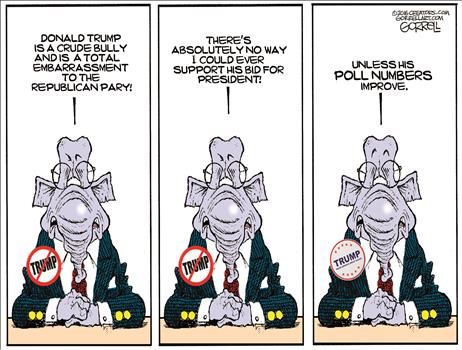 spokesman Jason Miller said in a statement. “Inarguably, Donald J. Trump is a closer. Having successfully obtained President Obama’s birth certificate when others could not, Mr. Trump believes that President Obama was born in the United States.”    So what we have is Trump taking credit for proving something he didn’t prove and when he tried to prove the opposite.   As for it being an ugly incident,  we wonder who was most responsible for it being so ugly?  Is the same person responsible for the fact that around 44% of Republicans and a majority of Trump supporters believed that Obama was born in Kenya? Next question:  Will Trump now prove that Obama is not a Muslim by attempting to prove that he is? buy generic plavix

TRUMP’S  TAX RETURNS
The Donald has been making excuses for many months as to why he hasn’t released his taxes, 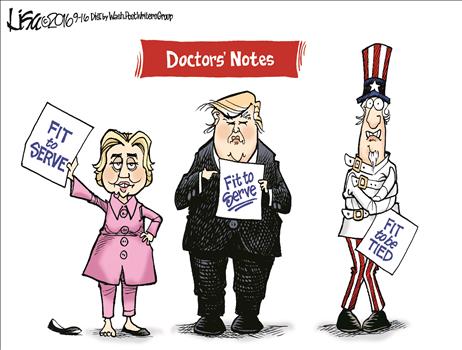 as every other candidate in the last 50 or so years has.  According to the IRS code, the president has the authority to request a copy of anyone’s tax return but White House sources say that Obama is unlikely to use this authority to force disclosure of Trump’s taxes.   Some people are wondering why a dictator wouldn’t do that.  A few Democrat lawmakers have introduced legislation to require candidates to provide tax information but such legislation has no chance in the Republican controlled congress.  The only method left is to make it a big campaign issue but that hasn’t worked so far.    Meanwhile, Donald Trump, Jr. may have let slip what The Donald’s next excuse will be.  Until Thursday, Trump’s excuse for why he will not release his taxes was that he is under audit. Recently, however, journalists have been pushing back at that story in two ways. The first is by pointing out that being under audit

does not stop a person from releasing their taxes (Richard Nixon, for example, released his taxes while under audit in 1973). The second is by asking for evidence that this audit is really happening, and is not just a lie.  Possibly sensing that they were headed for a debate disaster, the Trump campaign may have made up a completely new explanation for the tax secrecy.   In a Thursday interview with the Pittsburgh Tribune-Review, Junior said that his father is not releasing his returns, “Because he’s got a 12,000-page tax return that would create…financial auditors out of every person in the country, asking questions that would distract from (the campaign’s) main message.”   Of course, no one believes that the number of pages has anything to do with it, although we tend to agree that it would probably detract from the campaign’s message, which is likely contradicted by the candidate’s own personal and business dealings.  buy generic levaquin 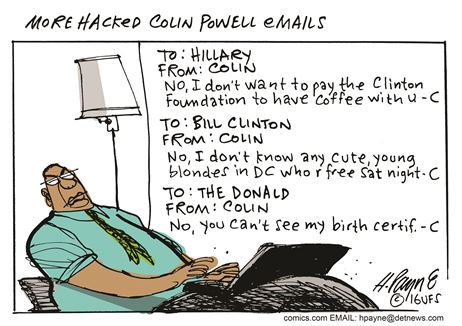 TRUMP JR. INTERVIEW CUT OFF
Donald Trump Jr.’s interview with a Pennsylvania TV station ended abruptly after a reporter asked the Republican presidential candidate’s eldest son about Washington Post reports that Trump used foundation funds to pay for a portrait of himself at an auction. “You’re a director of the Trump Foundation charity. Did you sign off on charity money for a portrait?” WTAE reporter Bob Mayo asked in a segment aired Wednesday evening, with the Trump Organization executive in town to open his father’s western Pennsylvania campaign headquarters. Trump Jr. responded, “No, I don’t know anything about that.”As Mayo asked, “So how come you didn’t know,” a voice off-camera said, “All right. That’s it. … We have to move on to the next … next one, thank you.”  more: 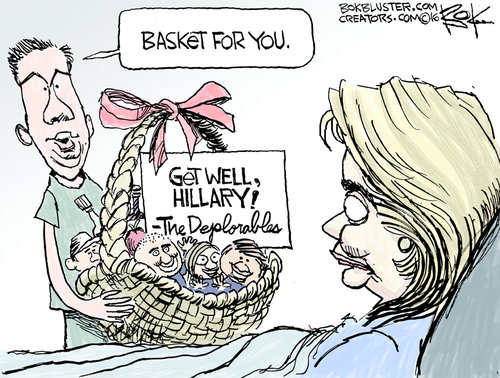 GOOD NEWS FOR HILLARY
The Virginia Supreme Court has sided with Governor Terry McAuliffe, who attempted to restore the voting rights of 200,000 convicted felons who had served their sentences.  Earlier this year, the Governor issued a blanket order doing this and Republicans sued, claiming that he exceeded his authority because he could only do this on an individual basis.  The court agreed and stopped the order.  So he just signed 200,000 individual petitions doing the same thing.   Republicans sued again, claiming that he was in contempt of court.  The Va. Supreme Court sided with McAuliffe this time.  Former criminals tend to be disproportionally poor and minorities and so are expected to vote mostly for Democrats, if they vote at all.  As far as Virginia Republicans are concerned, they should never become full citizens again.  The governor is still recovering from writer’s cramp. buy generic nexium 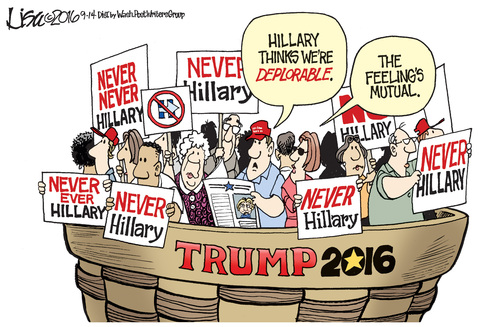 FORD CEO SAYS TRUMP IS WRONG
Ford CEO Mark Fields said GOP presidential nominee Donald Trump is completely wrong when he said that Ford plans to move its U.S. operations to Mexico, or even shift future investment outside the country. “It’s really unfortunate when politics get in the way of the facts,” he said Thursday in an exclusive interview with CNN’s Poppy Harlow. Asked if Ford would cut any U.S. jobs as part of its plans to build a new plant in Mexico, he responded; “Absolutely not. Zero. Not one job will be lost. Most of our investment is here in the US. And that’s the way it will continue to be.” Earlier Thursday, Trump said in an interview on Fox News that Ford planned to “fire all their employees in the United States and…move to Mexico.” He added that Ford would have to pay a 35% tax on any car that comes back to the U.S. if he becomes president. “And you know what’s gonna happen, they’re never going to leave.” This is  similar to what Mitt Romney said during the 2012 campaign, when he claimed that Obama sold Chrysler to the Italians and they were moving all Jeep production to China.  That statement earned the “lie of the year” award.   Mr. Fields should know that politics frequently gets in the way of the facts, but facts rarely get in the way of Politics.

TODAY’S MEANINGLESS POLLS
Another day of bad Polls for Hillary.  According to these, all the swing states here are going to Trump except Virginia.  Another bad sign is how bad things look in Arkansas, where she was once First Lady.   But that was a long time ago, and she was much better looking then. 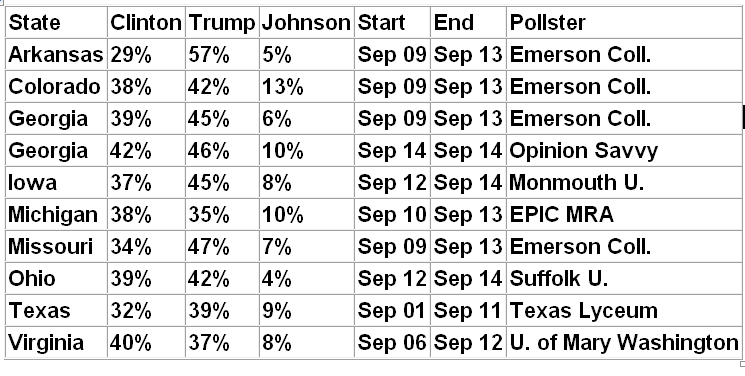