NOT JUST ANOTHER BIASED MEDIA JOKE 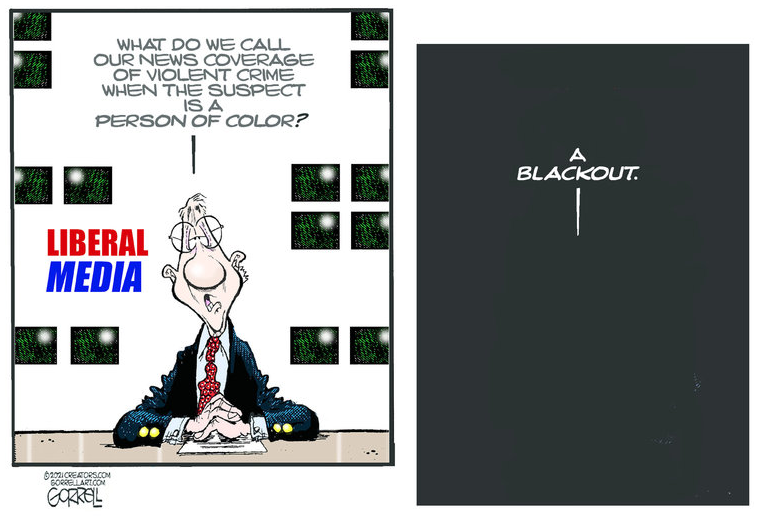 TODAY IS
THURSDAY, DECEMBER 02
TRUMP’S THREE-HUNDRED-AND-SIXTEENTH DAY OUT-OF-OFFICE
AND ARE WE BEGINNING TO SEE A PATTERN? 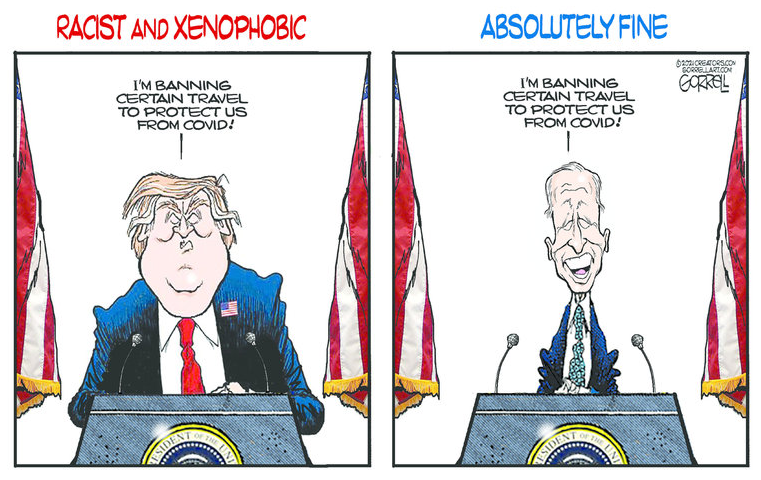 MEANWHILE, BEN GARRISON SAYS, “MARXISM IS A UNIVERSAL ACID. IT CUTS THROUGH AND DESTROYS EVERYTHING IT TOUCHES.” 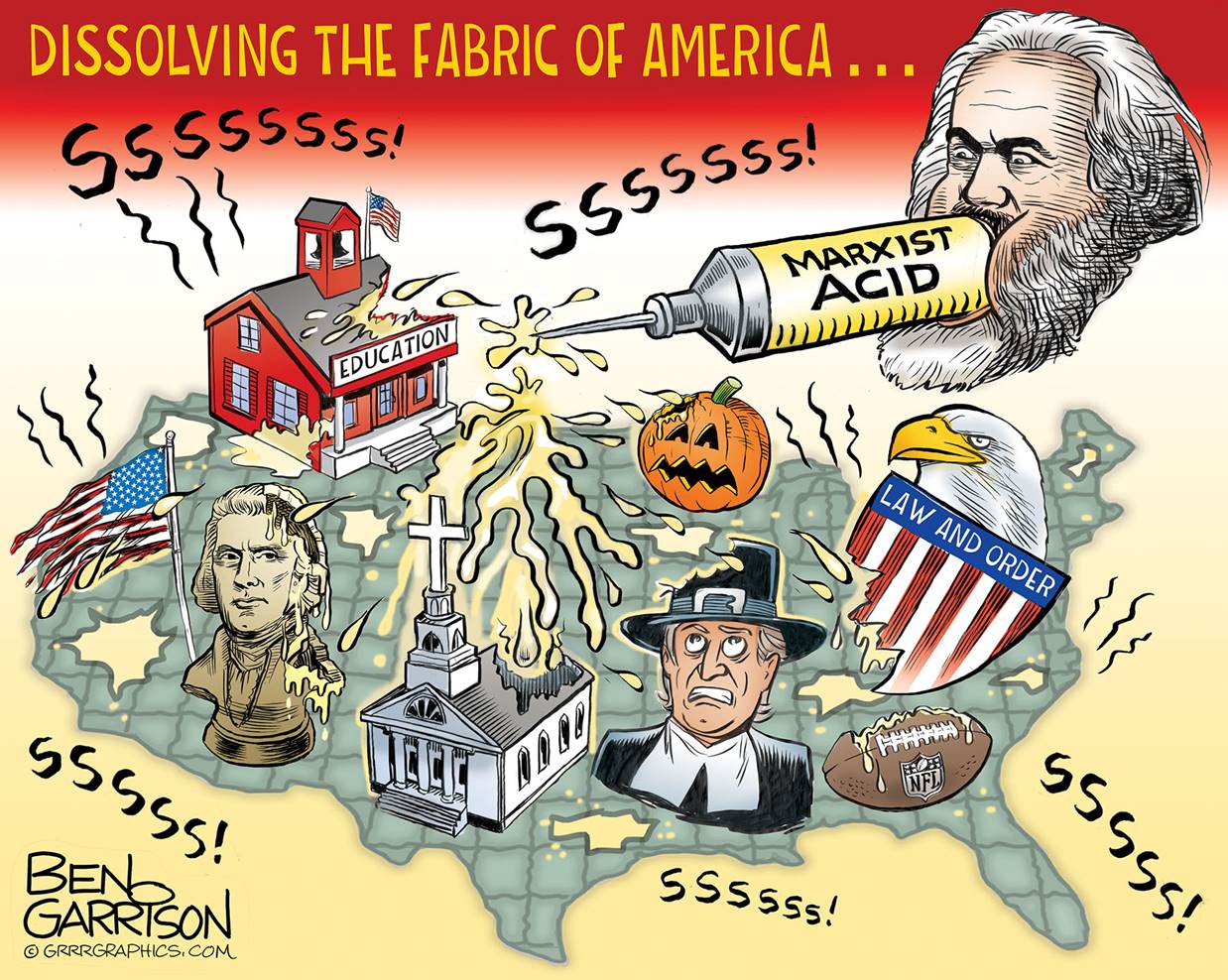 The ‘woke’ left is delivering destruction through a hypodermic needle. The drummed-up pandemic fear enabled the Marxists to steal a presidential election.

Unless we pushback,  the steal will be permanent.

George Soros, Klaus Schwab, and other mega billionaires that represent the New World Order want to destroy our country. They want to destroy the middle class. They want everyone poor—or dead. Medical tyranny combined with Marxism is the way they’re doing it. It’s a Cloward-Piven strategy.

They want to divide and destroy America and everything it has stood for and replace it with Marxist tyranny.

They captured the Democrat party and realized that Sleepy Joe was perfect for them—he’s demented, crooked, and stupid. He does what he’s told. He thinks white people are ‘white supremacists.’ He announced that whites will soon be a minority and that’s a ‘good thing.’ Really, Joe? His regime represents Marxist ‘woke-ism. He and his Marxist functionaries are intentionally destroying America. Nobody is doing anything about it. Vote him out? Can you trust the voting process anymore?

This is a war for our freedom and way of life.

The borders were left wide open. Joe even wants monetary incentives to draw in more illegal aliens, who do not want to blend into American culture. They merely want free stuff. Remember when Joe promised unity? That was a lie.

The things that united America are under attack. Education, for example. Woke-ism is being taught in public schools. Disagree and the Democrat-controlled FBI will harass you. White children are told they are evil and racist. Sexual perversion is promoted. They are taught to hate America.

OUR “LET’S GO BRANDON” T-SHIRT IS SURE TO TURN HEADS- ORDER YOURS TODAY! 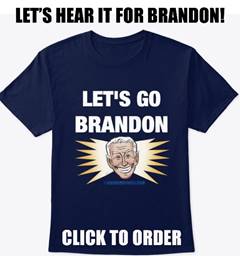 Our holidays are under attack. We are told Thanksgiving should be a day of mourning. They don’t want us to say “Merry Christmas.” Even Halloween was subject to all kinds of costume prohibitions. Fourth of July will soon be called a racist holiday if it isn’t already. These holidays have long been ‘inclusive’ to all Americans, but to the Marxists it’s the wrong kind of inclusion.

Professional sports are under attack. They went woke. I remember Pete Carroll, the Seattle Seahawks coach, waxed un-eloquently about how inequality is a big problem in America and how folks should be made ‘equal.’ Who makes this equality happen? Why, a Marxist government of course…and they’ll do it with their usual brute force. Everyone will be made equally poor and miserable. Funny how equality didn’t apply to Pete’s team. Presumably he wants the best players and they’re paid millions of dollars to play a game. The Seahawks have a current record of 3 wins and 7 losses. It can’t be the fault of his “equal” players. Therefore, it’s time to fire the gum-chewing socialist Pete Carroll!

The concept of law and order is under attack. The Marxists claim the police are racist and must stand down when there is rioting and looting. The Marxist media don’t like the word looting, though. Maybe we should call it peaceful shopping without paying. Crime has risen to alarming levels in many of the Democrat-run cities, just the way the Marxists like it.

Our economy is under attack. Inflation is a hidden tax and Sniffy Joe also wants to add hundreds of thousands of IRS agents to audit and shake down the little people. Does anyone think they’ll audit the corporate, globalist billionaires? No. They’re coming to crush America’s middle class and small businesses. Joe wants you to pay your ‘fair share’ while he vacations with billionaires. ‘Fair’ is whatever the tyrants decide is fair. In reality, they want it all.

Christianity is under attack. Churches are a uniting factor which must be destroyed under Marxism. People are only allowed to worship a big, all-powerful government.

Our history is under attack. The United States has not been a perfect, utopian country. Therefore, it must be completely destroyed and replaced with Marxism—which has never worked anywhere.

Once the fabric is dissolved, the Marxist masters will not allow it to be rewoven as it was. Freedom can easily be lost, but once lost it can only be regained by means of bloodshed. 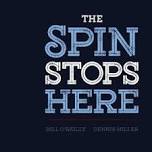 Beloved Whistleblower Publisher Charles Foster Kane Says The Conservative Agenda is watching to see if any progress is made during the next 152 days before this next year’s primary elections on May 03.