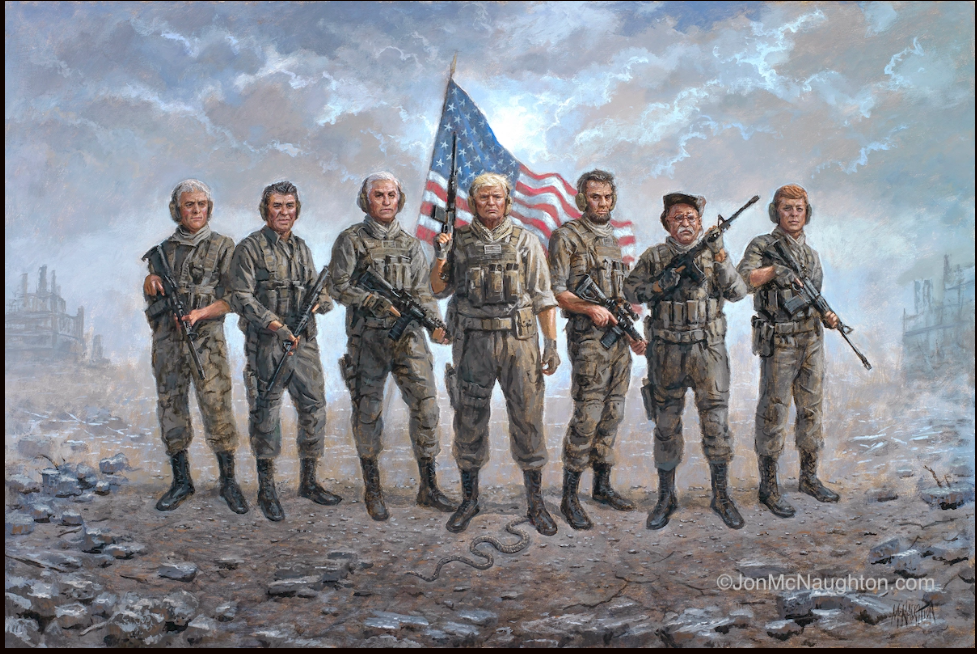 In his prime-time address to the nation Thursday night, President Joe Biden spent the bulk of his speech talking about people – people he continually referred to as “MAGA Republicans” – vilifying them as the greatest threat to our country.

Who are MAGA Republicans exactly? They are people who simply want America to be a great nation. They are people who want to bring America back to our founding principles written in the Declaration of Independence and Our Constitution, principles that have made America great in its past, and will do so in the future if we embrace them.

Early in the speech, Biden said, “MAGA Republicans do not respect the Constitution.” But it was Joe Biden who has said repeatedly that “no amendment to the Constitution is absolute.” That statement shows a complete disrespect for our Constitution and is a threat to every one of our Constitutional rights. Joe Biden and the Democrats have passed laws that have greatly restricted our 2nd Amendment right to keep and bear arms. He is also attempting to create a Misinformation Governance Board which would all but eliminate our 1st Amendment rights to freedom of speech and freedom of the press. In his speech, he criticized the overturning of Roe v Wade which was a Supreme Court decision where earlier Justices created a Constitutional right out of thin air.

Biden said, “MAGA Republicans… do not believe in the rule of law.” But wasn’t it the Democrats who defunded the police in our major cities throughout the country and implemented no-cash bail even for violent criminals both of which have led to a 40% increase in violent crime and murder in those cities? Isn’t it Joe Biden who has opened our southern border to millions of illegal immigrants essentially eliminating our federal immigration laws? Isn’t it Democrat mayors who have declared their cities “sanctuary cities” and will not prosecute illegal immigrants for the crimes they commit even violent crimes for fear the illegal immigrants would get deported?

Biden called MAGA Republicans “semi-fascist”, claiming that they “promote authoritarian leaders.” But it is the Biden administration that rules like authoritarians. They collude with big tech and social media platforms to take down posts they didn’t like which is government censorship and what fascists do. The Biden Administration has imposed mask and vaccine mandates on tens of millions of Americans threatening their jobs and livelihoods if they do not comply. They have also weaponized our intelligence agencies against political opponents, another tactic of fascists.

Biden said, MAGA Republicans “fanned the flames of political violence that are a threat to our personal rights.” He claimed that “they embrace anger. They thrive on chaos.” But Democrats like Joe Biden, Kamala Harris, and Barack Obama supported the political violence led by BLM and Antifa that we suffered through for 5 straight months in the summer and fall of 2020, in our major cities. They kept silent because their party benefitted from the chaos of the 500 riots which killed over 30, injured thousands, burned thousands of buildings to the ground, and caused billions of dollars of damage. The Democrats have threatened the lives of Supreme Court Justices in an attempt to intimidate the Justices to rule the way they want which led to an assassination attempt on Justice Brett Kavanaugh.

Biden claimed that “MAGA Republicans are destroying American democracy.” First of all, America is not a Democracy; it is a Constitutional Republic. Our founders created a Republic because they knew that direct democracies are vulnerable to tyranny and mob rule which is exactly what Democrats rely on to attain and keep power. That is why the Democrats want to do away with the Electoral College which is a mechanism that keeps America a Representative Republic. If Joe Biden was referring to our system of elections, isn’t it the Democrats who are pushing for a federal takeover of elections, implementing universal mail-in ballots, unsecured drop boxes, getting rid of voter ID and signature match, and pushing for government censorship of political speech, all of which would greatly compromise the integrity of every election going forward?

Biden said, “Democracy cannot survive when one side believes there are only two outcomes to an election: Either they win, or they were cheated. And that’s where the MAGA Republicans are today.” Interestingly, the Democrats lauded the 2020 election that they won, as the “most secure election in American history”, but Al Gore challenged the results of the 2000 election when he lost; John Kerry claimed that the voting machines in Ohio were rigged in the 2004 election that he lost; Hillary Clinton claimed that Vladimir Putin illegally influenced the results of 2016 election when she lost; Stacy Abrams has never conceded the 2018 Georgia Gubernatorial election that she lost. Leading up to the 2020 election, Hillary Clinton even told Joe Biden “Don’t concede under any circumstances”.

Biden chastised MAGA Republicans as selfish and anti-democratic when he said, “You can’t love your country only when you win.” But it was Democrat Michelle Obama, in 2008 after Barack Obama won the Democratic primary, who said that it was “the first time in my adult life, I am really proud of my country.” So, it is leading Democrats like Michelle and Barack Obama who “love their country only when they win.”

Biden said that “MAGA Republicans… spread fear and lies.” Biden’s entire speech was strictly about spreading lies about his opposition to stoke fear in Democrat and Independent voters to sway the mid-term elections in favor of Democrats this November. Wasn’t it Joe Biden, back in the 1980s and ’90s who led the partisan attacks on eminently qualified Supreme Court nominees Robert Bork and Clarence Thomas based on fear and lies which derailed Bork’s confirmation and caused Justice Thomas to call what Biden did to him as a “high-tech lynching for uppity blacks”?

Joe Biden gave a dictatorial speech on Thursday night, the typical “enemy of the state” speech, which is common among authoritarians, targeting certain citizens as the enemy. He attacked 74 million Americans, average citizens who simply want to be able to afford to pay their mortgage and buy groceries. But that’s whom he sees as the enemy, the average American, the men and women who get up every day and do the jobs that keep America running, who pay their taxes, who raise their children to love God and their country. But it is those very people who Biden continually attacks. That’s why he hired 87,000 new IRS agents to go after the little guy. That’s what he is doing with the open borders, attacking average Americans. That’s why he’s attacked the fossil fuel industry. That’s why he does nothing about the fentanyl crisis that’s killing tens of thousands of Americans every year. That’s why he is going after the 2nd Amendment. That’s why he sent the FBI after parents who object to the extreme curriculum in schools.

Joe Biden has to talk about people because he can’t talk about his ideas. His policies are destroying America in real-time, and according to him, the people who don’t like what he’s doing to America are the problem. Anybody who criticizes his failed policies is not only wrong but evil. Joe Biden hates the American citizens who simply want to make America great because every single one of his policies has made America weak and vulnerable. His war on our fossil fuel industry has not only put America in jeopardy where we must beg dictators and autocrats for the energy we need, but it has also hurt our allies in Europe who are now more dependent on Russian oil and gas than ever. Biden’s reckless spending has driven our out-of-control inflation which is impoverishing many American citizens. He has devalued the dollar to the point it is on the verge of no longer being the world’s trade currency. His open border policy has allowed over 2 million foreign nationals into the country, which is overrunning our social services, endangering the lives of Americans, and driving the opioid epidemic. He and his fellow Democrats’ soft on crime policies have caused an explosion of violent crime and murder in Democrat-run cities across America.

On Thursday night, Joe Biden displayed how small-minded he truly is by attacking and vilifying tens of millions of people. The most alarming takeaway from his address is that Joe Biden can reference the importance of respecting our Constitution, upholding the rule of law, standing against authoritarianism, supporting democratic elections, and against political violence, yet he has repeatedly violated every single one of those principles which means he knows exactly how destructive he is being to our country, yet he continues to do it anyway. Joe Biden referenced the “soul of our nation” several times in his speech, but it is hard for a nation to have a soul when its leader is a soulless corrupt politician who continues to enact policies that make his country and his fellow citizens weaker and more vulnerable for his own political and personal gain.