TODAY IS
WEDNESDAY, AUGUST 17, 2022
TRUMP’S FIVE-HUNDRED-AND-SEVENTY-FOURTH DAY OUT-OF-OFFICE
WHY WAS THERE NO REALLY BIG MEDIA-ORCHESTRATED DIVERSITY PROTEST AT TODAY’S FOREST HILLS SCHOOL BOARD’S BLACK WEDNESDAY MEETING? EVERYBODY WAS STILL READING ALL THOSE COMMENTS ON THAT WOKE “YOU’RE-A-RACIST” EDITORIAL IN THE EQUALLY-AS-WOKE FISHWRAP THAT ENDORSED CROOKED HILLARY.

Edition #64 (published on August 20, 1991) of the original printed edition of The Whistleblower (not the Newswire) was delivered to Persons of Consequence all over town. It was our “Sure cure for uncontrollable, hysterical laughter” Issue, and our Really Big Story was all about our tribute to a Greater Cincinnatian. Our Top Ten List listed the top ten things P&G President Ed Artst found out when he checked his employees’ long-distance telephone records. Plus there was a story about the timing of Judge Thomas Crush’s verdict announcement in the Mickey Esposito case. 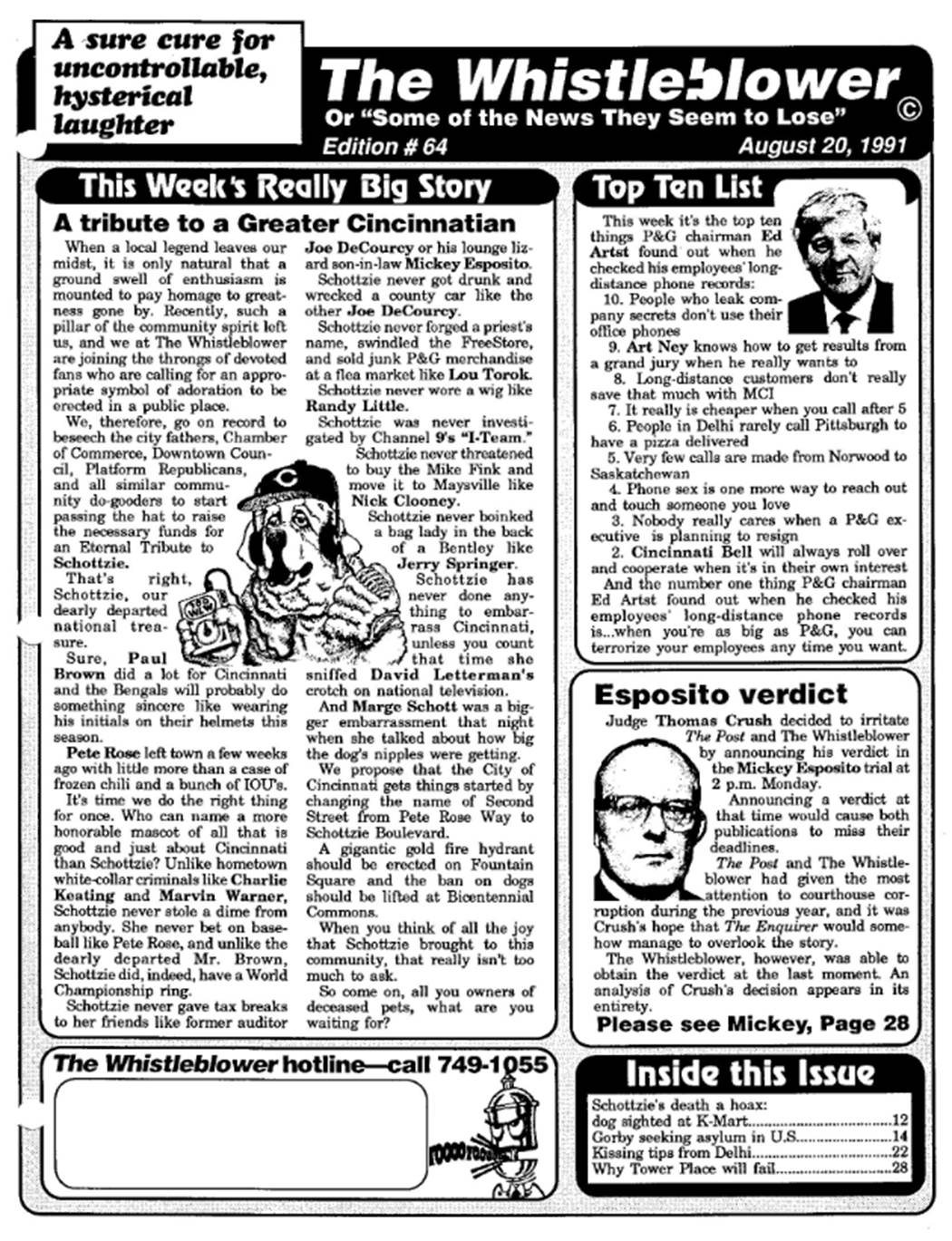 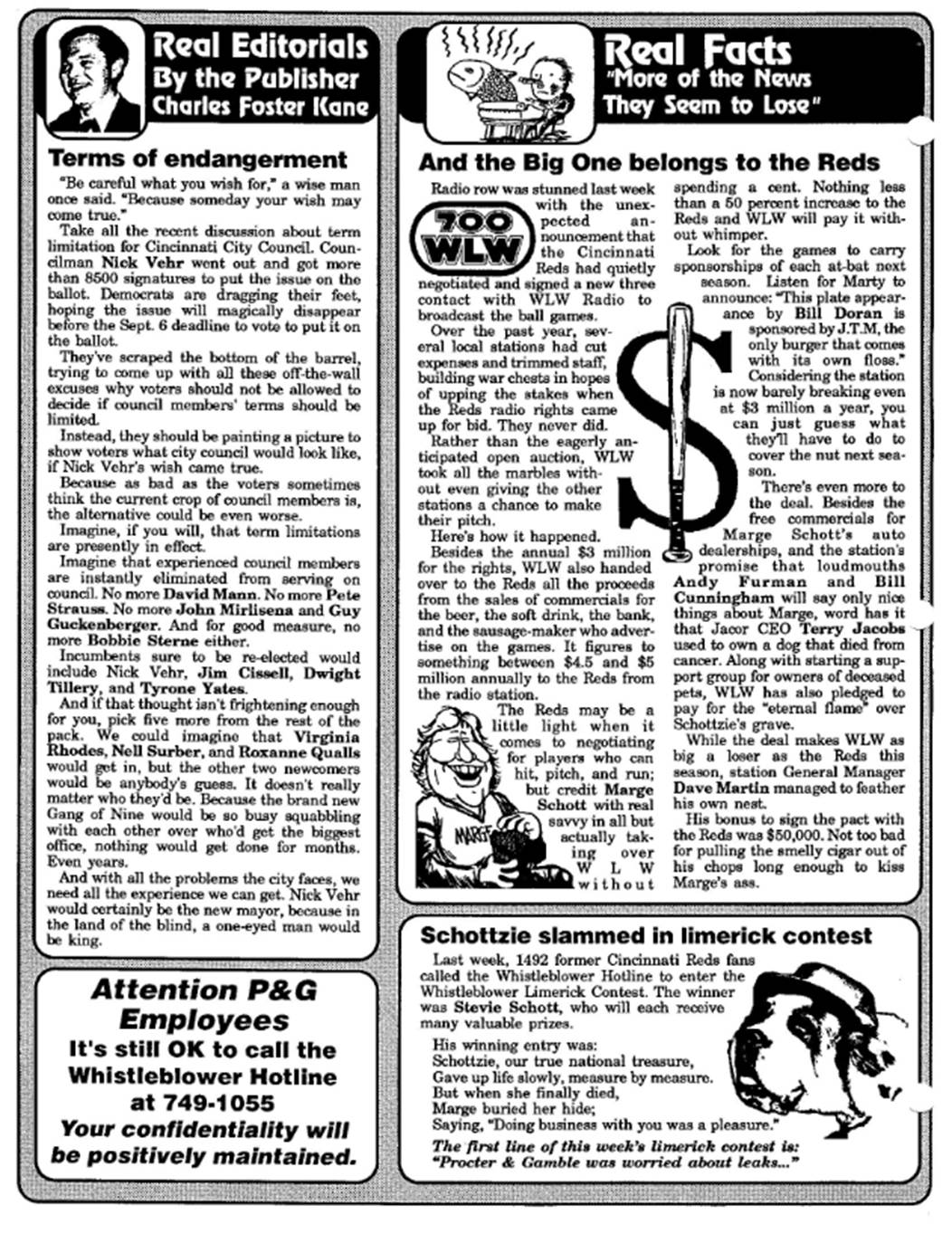 Page Three featured Cheap Shots at Brewster Rhoads, Pete Strauss, and Stanley Aronoff. There was a promo for Whistleblower Publisher Charles Foster Kane’s appearance on a 55 WKRC Radio program, as well as also another Real Guest Editorial by Bunky Tadwell (this one was about some of the goings-on at P&G). 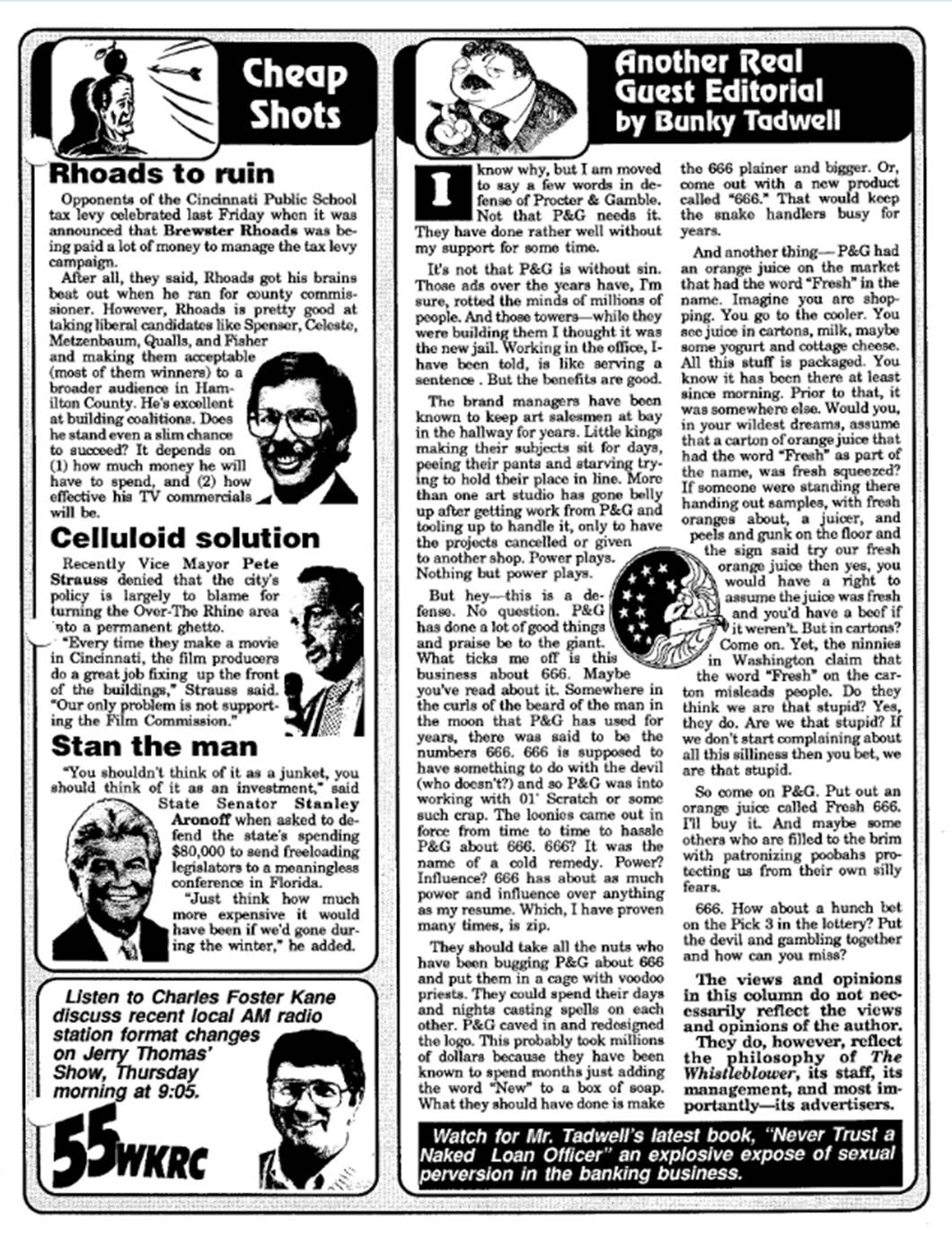 Page Four was for our regular weekly Real Letters From Real Readers column, and Another Exclusive Whistleblower Report featured the censorship in Butler County. 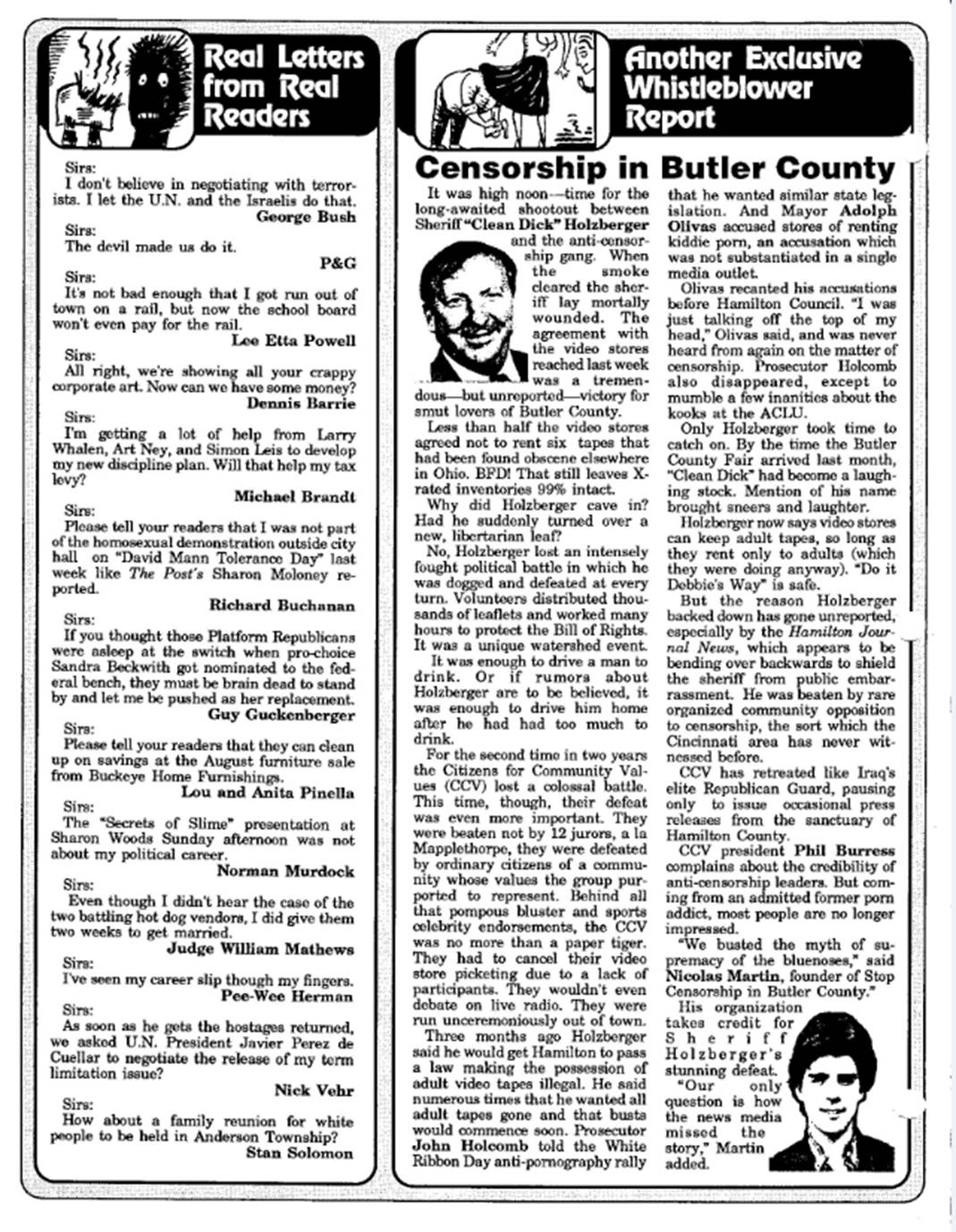 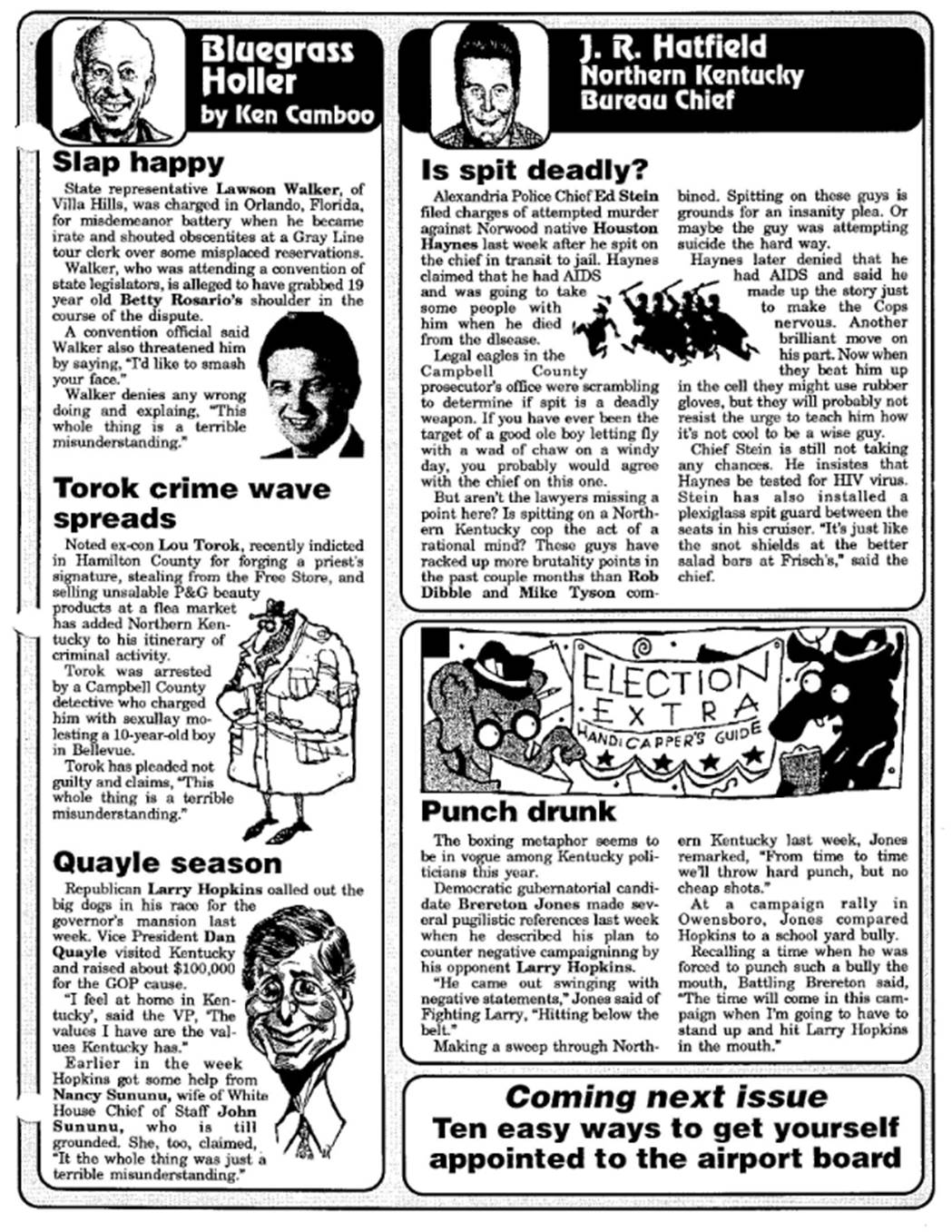 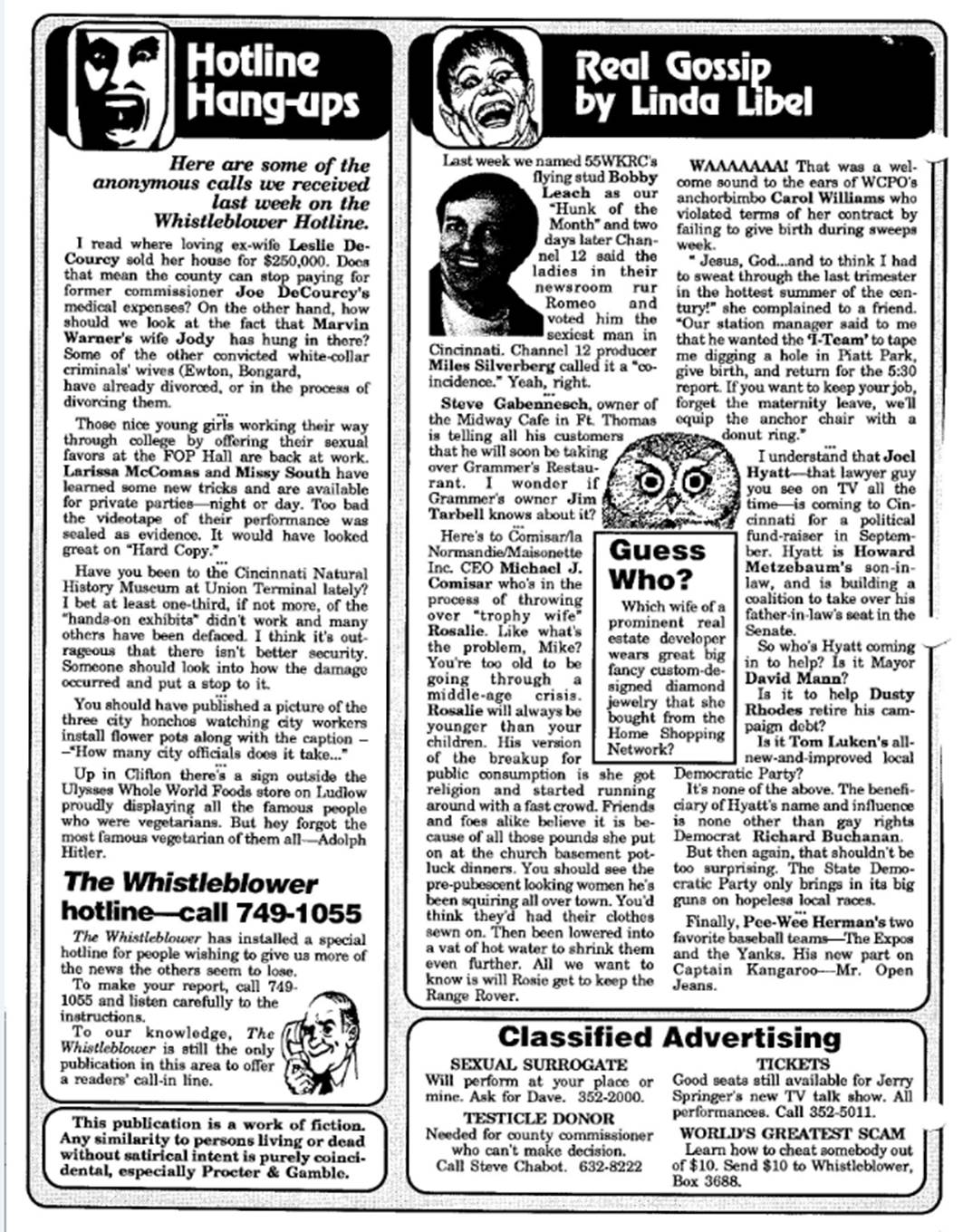 It’s really hard to believe how good The Whistleblower was in those days. You can download that entire edition HERE.