TODAY IS
FRIDAY, JULY 08, 2021
TRUMP’S FIVE-HUNDRED AND THIRTY-FOURTH DAY OUT OF OFFICE
AND THE BLOWER’S WONDERING WHY D-RAT EX-CINCINNATI COUNCILMAN P. G. SITTENFELD DIDN’T HANDLE HIS OWN DEFENSE THE WAY OUR GOOD FRIEND MICKEY ESPOSITO DID 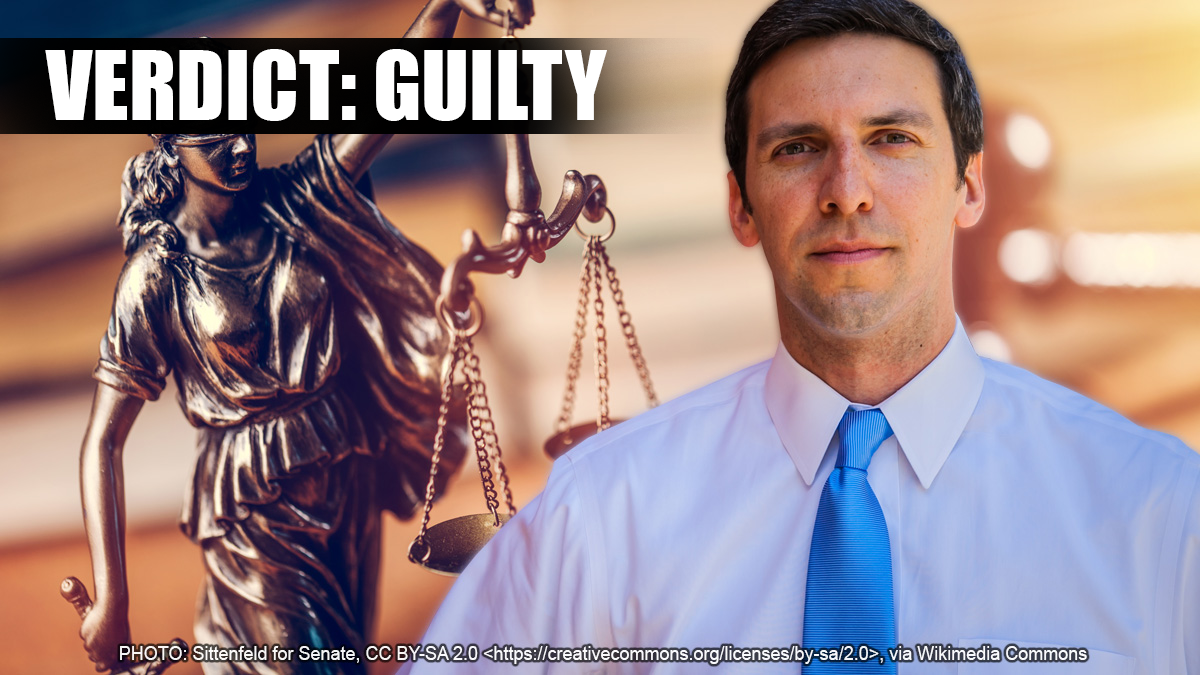 Edition #58 (published on July 9, 1991) of the original printed edition of The Whistleblower (not the Newswire) was delivered to Persons of Consequence all over town. It was our “More Than  A Sound Bite” Issue, and our Really Big Story was all about goofy looking people on TV; Our Top Ten List listed the top ten reasons the grand jury didn’t find the building inspectors guilty, even after seeing the Channel 9 “I-Team” tapes. Plus there was a big story about what was holding up the grand jury transcripts of the building inspectors probe. 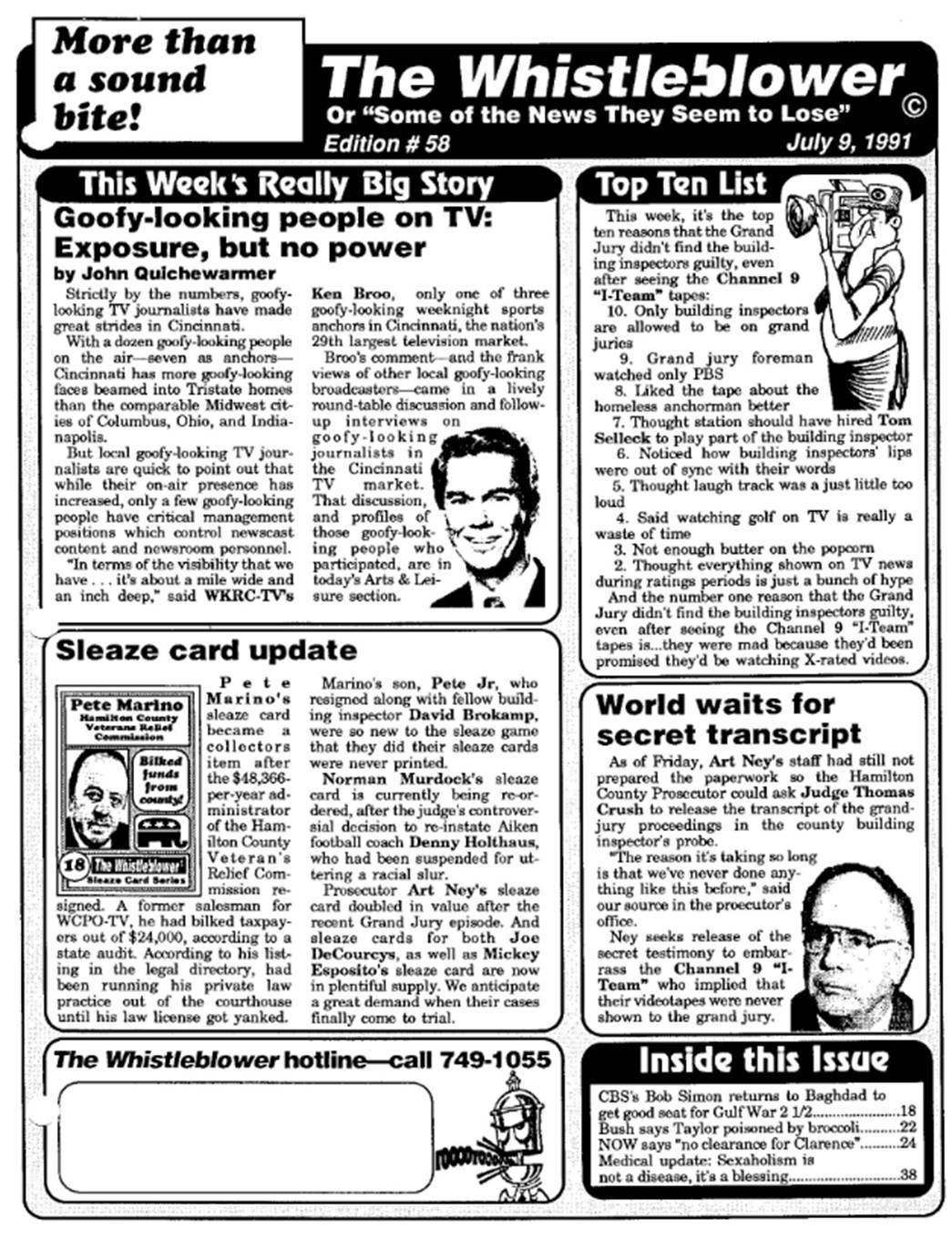 Page Two with Real Editorials by Publisher Charles Foster Kane about campaign financing.  Real Facts reported about the lackluster results of “Operation Firecracker” in Butler County. There were a lot of names of politicians who marched in the area’s most political Fourth of July Parade. Plus there was an ad for an interim superintendent at the Failed Cincinnati Public Schools. 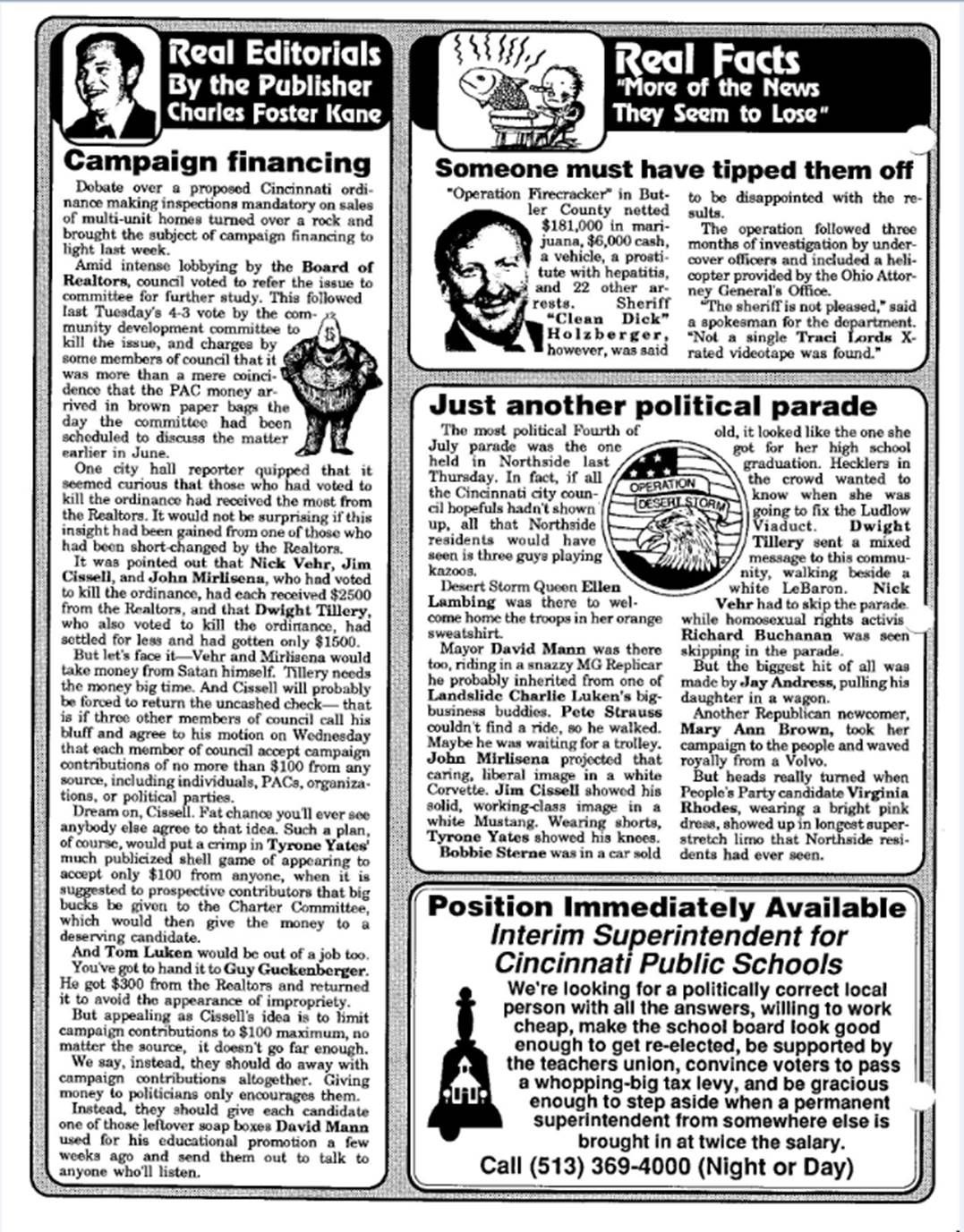 Page Three featured Cheap Shots Quentin E. Davis, the new $80,000-per-year director of Cincinnati’s Economic Development Department, Dennis Hicks, the new executive director of Cincinnati’s dynamic Charter Committee, and Julie Isphording. There was a promo for Whistleblower Publisher Charles Foster Kane’s appearance on a 55 WKRC Radio program, and another Real Guest Editorial by Bunky Tadwell (this one was about how the devolution of the quality of entertainment at Music Hall), along with an ad for Randy’s Rug-o-Rama. 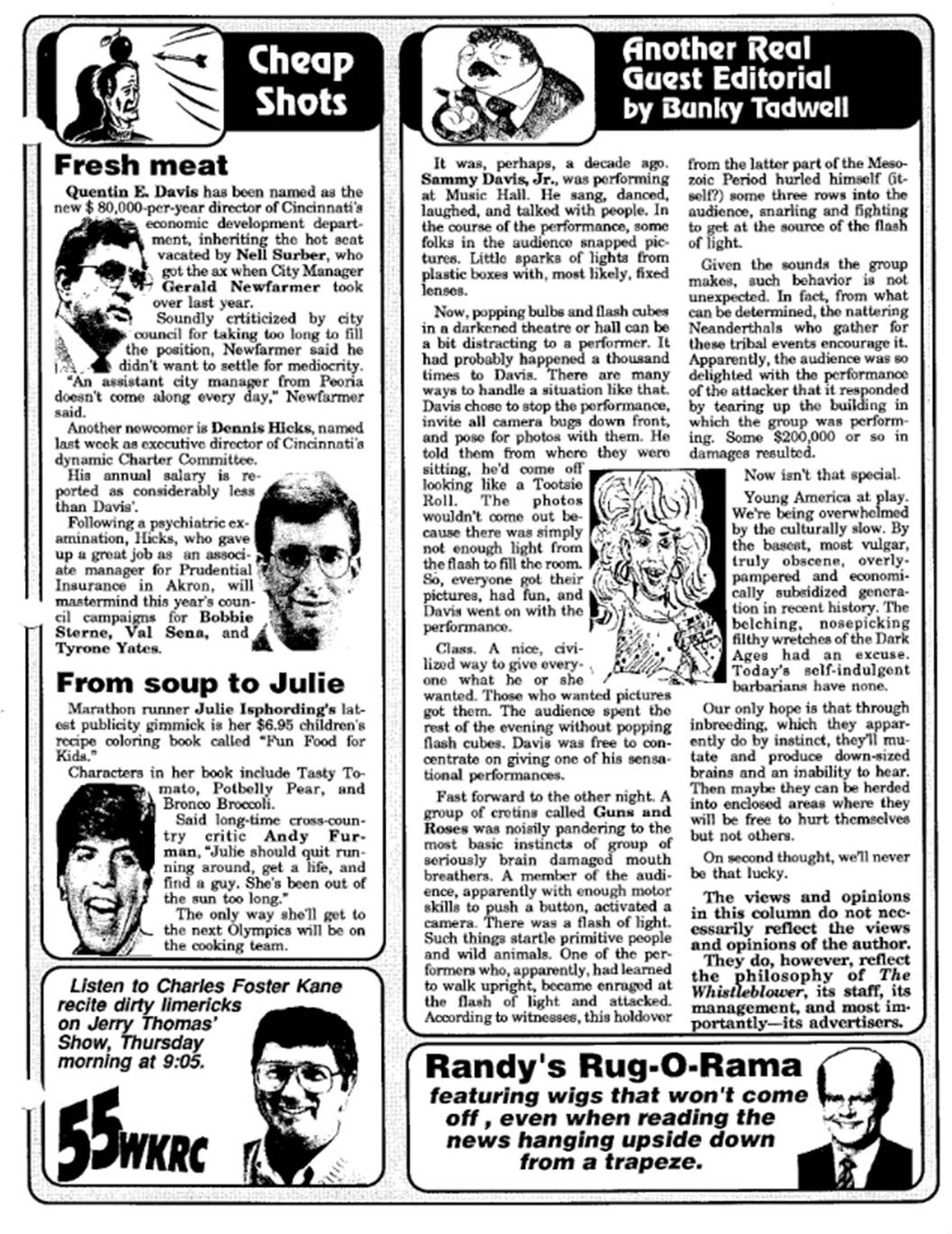 Page Four was for our regular weekly Real Letters From Real Readers column, Another Exclusive Whistleblower Report featured a story about how Ribs King Ted Gregory was planning to invest City of Cincinnati pension funds. Steve Chabot was recommending a “Tax Force” and Jerry Springer was slammed in the Whistleblower’s Weekly Limerick Contest. 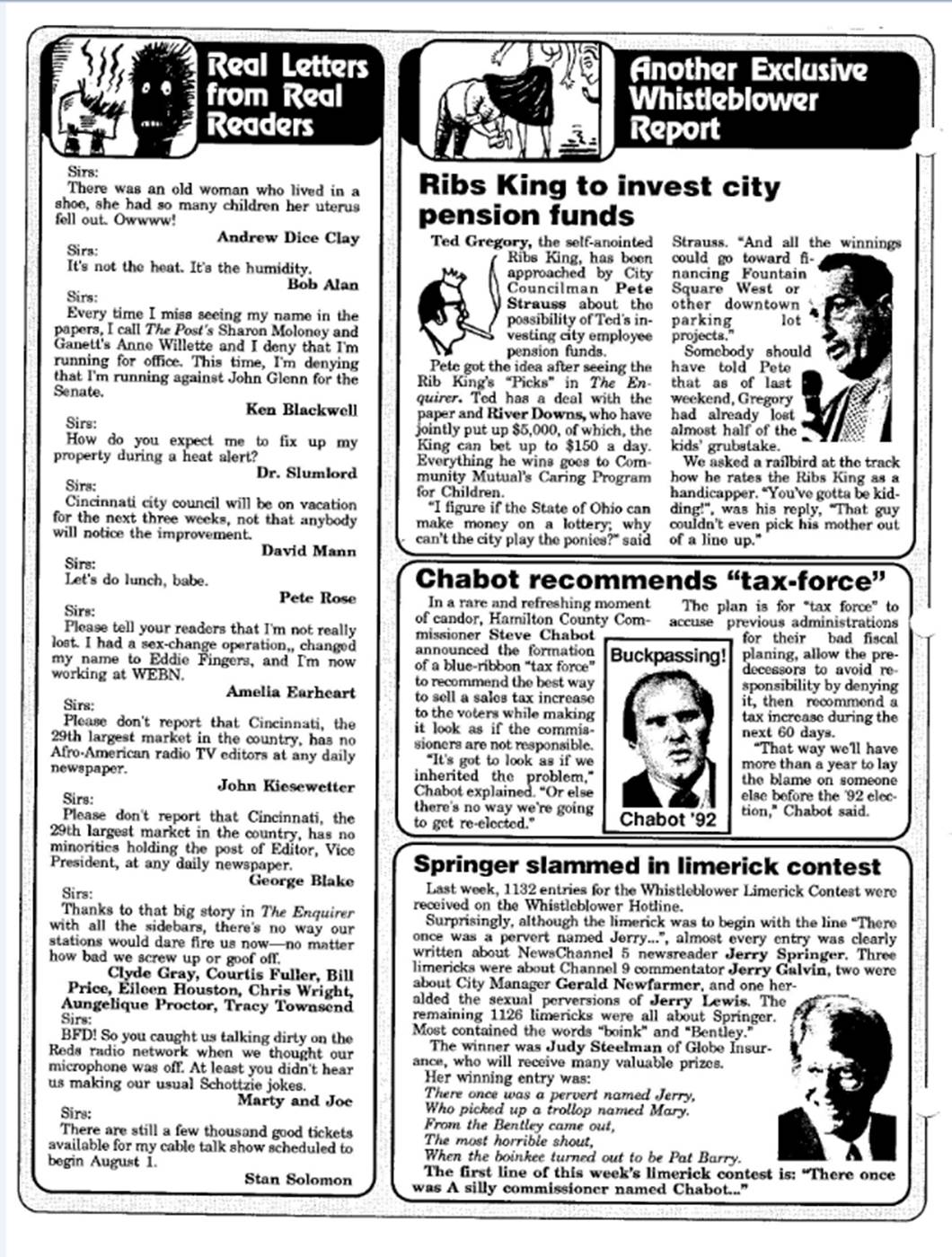 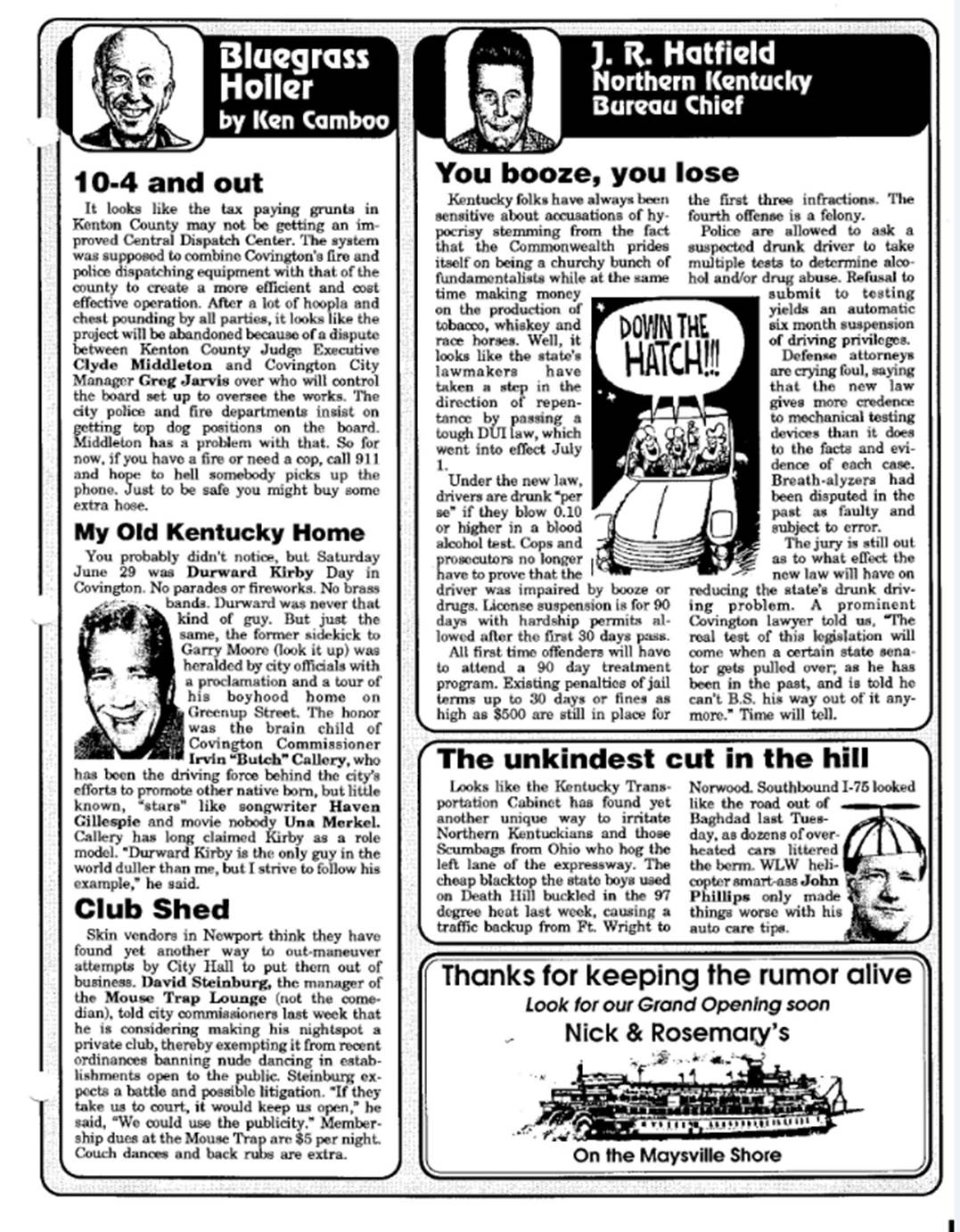 And Page Six included Hotline Hang-ups (some of the anonymous calls received on the Whistleblower Hotline, and in Real Gossip by Linda Libel, we heard more about Cincinnati Post columnist Nick Clooney’s denials about buying the Mike Fink and moving it upriver to Maysville.