The Legacy Of Frooman, Smith, And Heis Rides On For The Forest Hills School District. It’s A Grim One.

Last November, the district financial forecast showed that even after a new tax levy was placed upon the back of local over-taxed payers the district would still be in the red. Let’s lay down how much in the red before those numbers get erased:

Note the careful crafting of these numbers. A district goes on state fiscal watch when the operating deficit exceeds by 8% the prior year’s revenue. Forest Hill’s number in 2024 was manufactured projected to be 7.86%. Reality will be harder and harder to hide as the real numbers go into the books.

The forecast also showed operating cash running out in 2024. Oops.

We see that the district’s so-called “Finance Committee” met this week. No doubt there was whining, crying, and gnashing of teeth. Can’t wait to see the November 2020 forecast they no doubt were anguishing over. Vegas odds would be saying the numbers are more in the red than those we noted above.

All this brought on by the near-sighted vision of the three board members mentioned previously. As Frooman famously said in pushing his building levy boondoggle which locked the district into this mess “We have to do something.” “Something” was imposing a plan clearly leading to financial disaster. “Something” was a deaf ear to the facts. “Something” created overruns and lawsuit settlements that far exceeded the money coming in from the building levy.

So What’s One To Do In The Midst Of An Apocalypse?

Force dumbed down over-taxed payers to assume the position and take another tax levy? Don’t think so.

Take the funds promised to remove the Redskins mascot from history (like all those statues that fell over the last year)? Oh wait. Did those funds materialize? We can guess the answer to that.

Do what the prudent do in dire financial circumstances, make some changes? Has not been in this district’s DNA for a long time.

Apocalypses Don’t End Until A New Era Begins.
But When Will That Be For Our Forest Hills Schools? 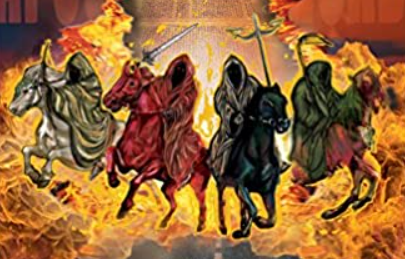