Please tell Sidney correct spelling is irrelevant in today’s graduate’s from public screwel’s.  Everybody now know’s that almost any and every “s” at the end of a word should be preceded by an apostrophe.  Look around.  It’s used car’s, a sale on TV’s, three taco’s for two dollar’s, three suit’s free with the purchase of one (at JOE-seff A. Bank), etc.  Want frie’s with that?  Or would it be spelled, Want fry’s with that? Whatever! —Conservative Curmudgeon Stu Mahlin

I much preferred it when the nation celebrated Washington’s and Lincoln’s birthdays separately, before Congress opted to change that practice for a three-day weekend.  But much more I preferred it when our Presidents were proud to uphold the dignity of the office – before President Obama embarrassed himself (without realizing it) and us with his Buzzfeed video.  May the Good Lord help us! —Bob McConnell, The Guy Who Sends You All Those Conservative Cartoons 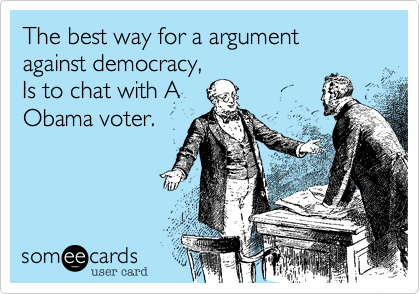 Yesterday we just wished everybody Happy “Barack Obama is the Only President We Will Ever Care About” Day. —Obama Supporters in the Press 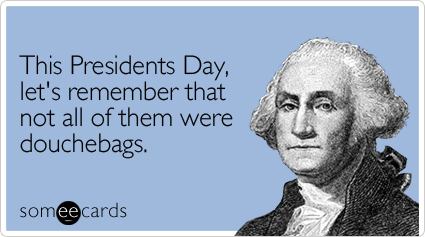 During last year’s Presidents’ Day Weekend, over-taxed payers treated Obama to another well-deserved weekend golfing vacation while The Mooch doubled the cost with her separate over-taxed-payer-funded holiday in Aspen. —The Obamas for Divided Marriages America

Here’s some good news: Only one in five companies with fewer than 500 employees say they are “likely” or “very likely” to discontinue company-provided healthcare coverage within five years. — Dumbed-Down, Self-Absorbed, Media-Influenced, Celebrity-Obsessed, Politically-Correct, Uninformed, Short-Attention-Span, Free-Stuff Grabbing, Low-Information Obama Supporters Who Put The Positively Worst President in History In The White House—Twice, and Failed Trying To Give Obama a Third Term By Voting For Hillary, and get all of their “fake news” from our Obama Supporters in the Press, like the ones at The Fishwrap and on Channel 5, 9, 12, and 19

Thanks for telling all your Persons of Consequence that the easiest most elementary tasks of party leadership is securing a candidate. Any candidate.Failing in the that……everything else about party significance becomes immaterial/irrelevant. —Hamilton County RINO Party Boss Alex T., Mall Cop GOP

Please don’t ask how Obama and the Disingenuous DemocRATS could reconcile their objections to the GOP position not to vote on his Supreme Court nominee when Senator Obama and I supported a filibuster against Bush nominee, Samuel Alito. —Dishonest DemocRAT Senate Minority Leader Up-Chuck Schumer

Actually, I was not the first person to use obscenities in American politics. —Donald Fucking Trump

Not all of the women my husband cheated on me with claimed he told them I was a Lesbian. —Hillary

If I had won, it would’ve been the first time a Jewish family moved into public housing that was left vacant by a black family. —Bernie Sanders

What do you think will happen when I show up at the White House on Friday? —Delusional Ohio Governor John Kasich

Does anybody remember the last time we set up one of our biased televised debates between “TaxKiller Tom” Brinkman and whoever was running against him? —League of Women Vipers

How many Stupid Protesters do you think will show up when I address the Northern Kentucky and Cincinnati Chambers of Commerce on Thursday at Hotel Covington where guests will dine on their choice of buttermilk fried chicken or seared Atlantic salmon? —Bitch McConnell 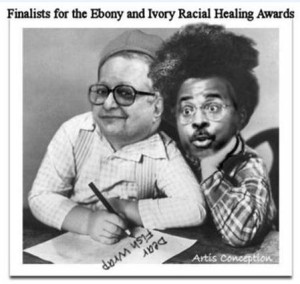 It’s truly an honor to be among this year’s finalists with Beloved Whistleblower Publisher Charles Foster Kane for the Ebony and Ivory Racial Healing Awards during Black History Month, now last year was called Half-Black History Month in honor of the current resident at 1600 Pennsylvania Avenue.  —Buckwheat Blackwell

Although our campaign is not associated with the Failed United Way, your liberal guilt giving throughout the year still makes it all possible. —The Seediest Kids of All 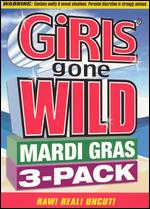 We can hardly wait for all the news coverage of this year’s Mardi Gras celebration.  —Bluegrass Bureau Chief Ken CamBoo

It was so tame last year, our “Girls Gone Wild at Mardi Gras” tape could turn out to be a real bust. —Mainstrasse Merchants

You know you love Mardi Gras too much if you wake up in court with your pants on backwards. —Archie Wilson

We were even going to run a special “Mardi Gras” edition of our “This Week in Kenton Circuit Court” Newsletter, but nothing exciting happened. —Kenton County Commonwealth Attorney E. Rob Sanders

Does anybody at Channel 5 remember when I used to call Fat Tuesday e-Norma’s Tuesday? —Quisling Charlie Luken

Did you know when you translate “Mardi Gras,” it means “Fat Mardi.” —Goof Doofus 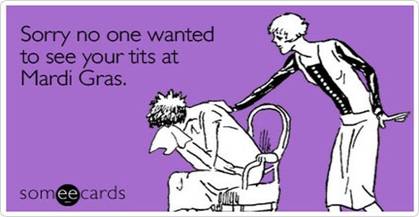 Did they do anything special for Mardi Gras at Golden Corral? —Clueless Marc Wilson

For some of us, every Tuesday is “Fat Tuesday.”  —Scott “Pass the Biscuits” Kimmich

You can’t imagine how much drinking goes on at Mardi Gras. —Michael Liquid Plummer and Nathan “Cornbread” Smith

I just got done reading the new Sports Illustrated “Swimsuit Edition,” but only for the articles. —Your Good Friend Bobby Leach

The guys at the station tell me I should be on the Swimsuit Edition? —TV 19’s Lingerie-Model-Turned-Reporter-Turned-Anchorbimbo Tricia “Leemarie” Macke

I quit WXIX-TV to embark on the most ambitious independent journalism project in history and make the Truth in Media project a reality.You’ll never guess where I’m working today. —Ben Swann

Remember: We never print all the bad stuff we know and certain people ought to be damn glad we don’t, especially SWIMSUIT PHOTOGRAPHERS.

Sometimes The Blower makes fun of Mardi Gras to show that women who bare their breasts in public for a few crummy beads will not be tolerated in our society. This should be clear to anybody who isn’t a real slut. 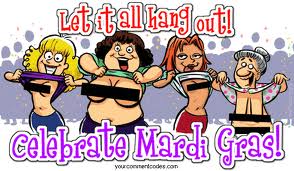 This publication is a work of fiction. Any similarity to persons living or dead without satirical intent is purely coincidental — especially guys who throw the beads. 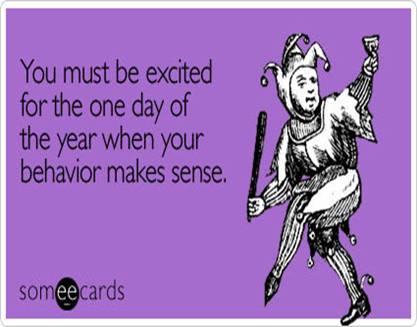 HERE’S WHAT AMERICA MISSED ON PRESIDENTS’ DAY (A Real President)