Think of how much things have changed since the first week in September, 2015. That year’s Meaningless Union Day Speeches had marked the traditional beginning of the fall negative political campaign season, and we could only imagine what we were going to see and hear during the next 68 days.

Does The Blower intend to do its part? You bet! As the official voice of the Conservative Agenda and the publication of record for all the political scrambling, speculation, mud-slinging, and back-stabbing in the Tri-State, our readers knew to expect nothing less.” 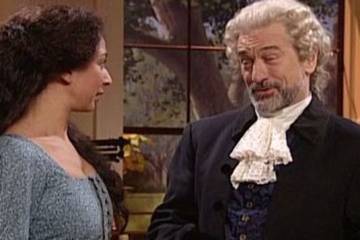 HURLEY THE HISTORIAN says on this date in 1802, the “Richmond Recorder” published an article about Thomas Jefferson and his black slave mistress Sally Hemings, but it was many years later that Whistleblower Gossip Columnist Linda Libel first exposed the forbidden love affair between a well-known local politician who left his family for an interracial romance with a fat black floozie.

WHISTLEBLOWER 2016 SUMMER INTERNS Olivia, Damon, Wyatt, and Tristan said then-25 years ago, when The Whistleblower used to be printed and delivered all over town, in Issue # 66 published on September 3, 1991 Edition’s our “Really Big Story” was the 1991 Campaign Kickoff, along with a message from the publisher. If we were as lazy as our Feckless Fishwrappers, we could’ve used that same message today.

THE LATEST POLLS: Whistleblower Pollster Ron Rasmussen said Hillary Clinton’s post-convention lead has disappeared, putting her behind Donald Trump for the first time nationally since mid-July. Do anybody any of those Dumbed-Down, Self-Absorbed, Media-Influenced, Celebrity-Obsessed, Politically-Correct, Uninformed, Short-Attention-Span, Free-Stuff Grabbing, Low-Information Obama Supporters Who Put The Positively Worst President in History In The White House—Twice, and Now Plan To Give Obama a Third Term By Voting For Hillary, and get all of their information from our Obama Supporters in the Press, like the ones on Channel 5, 9, 12, and 19, are even paying attention?

CROOKED HILLARY WAS IN CINCINNATI YESTERDAY:  That woman is not looking well. 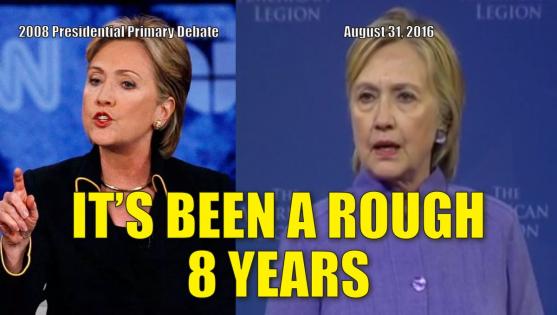 DONALD TRUMP OWNED SOUTHWEST OHIO TODAY: Starting off with a well-received Patriotic Speech to the American Legion in Cincinnati, followed by a big rally at the Roberts Center in Wilmington. 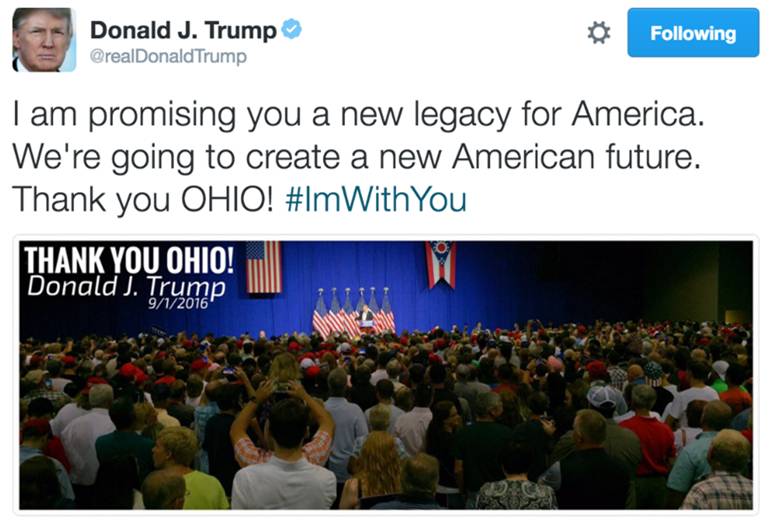 AND FROM THE GREAT WHITE NORTH, Trumpsters wanted to hold a Donald Trump rally in Lebanon, but they couldn’t find our Republican Party Headquarters. When they went on a scavenger hunt to find it, they were surprised to find it in a back alley facing the back of a hardware store. As you can see in the pictures there was a huge lock on the door and a lone picture of the next president in a dirty window. As they peered through the dirty windows they did see a stand up of Donald Trump but not one Trump sign anywhere. No contact number on the door or hours of operation. They made a call to the local board of elections at 513-695-1358 and asked the lady who was in charge of the Republican headquarters. She told them it was operated by Lori Viars and Jeff Monroe. She told them that they do have a phone number (513-932-6089). When they called, they only got a recorder and he left a short message, WHERE ARE our FREE FREAKING TRUMP SIGNS? These folks really have the Warren County Republican Party on fire, wouldn’t you say?

FOOLS IN SCHOOLS: Members of the Cincinnati Federation of Teachers were not at all shocked when learning that failed union “president” Julie SellYourSoul was solicited by the CP$ Bored of Edumacashun for a $100,000 COPE donation for successful passage of the upcoming levy in November.  Teachers are infuriated to learn that negotiations were not reopened as promised and teachers continue to feel the wrath of her inability to lead a mouse to a piece of cheese.  Perhaps another meeting is due at Central Parkway Frisch’s between Evil HogJawls Bolton and SellYourSoul. 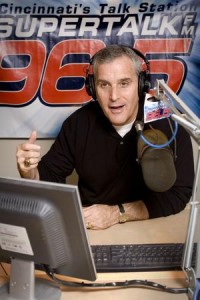 WHISTLEBLOWER SENIOR SPOILED SPORTS EDITOR ANDY FURBALL still can’t figure out what stupid idiot scheduled a UC and Bengal home game at the same time tonight. Although you could see Brad SoHandsome and Anthony Munoz doing the Bengals play-by-play on TV 12, the only way you could watch your Beloved Bearcats was on ESPN3, on your computer. Which was probably good news, because the 37-and-a-half point favorites Bearcats probably won’t beat the spread, not when they were losing 7-6 at the half.

FINALLY, AT THAT DAY’S MEETING OF THE CONSERVATIVE AGENDA, Political Insiders were asking Beloved Whistleblower Publisher Charles Foster Kane about the Colin Kaepernick controversy, where hours before kickoff of Thursday’s preseason game in San Diego against the Chargers, photos emerged from practices in August showing Kaepernick wearing black socks with images of pigs wearing police hats on them. “I’m just wondering,” Kane said, “if fans boo Kaepernick for sitting down during the National Anthem to show his disrespect for Truth, Right, and the American Way, will the news media call the fans unpatriotic?” 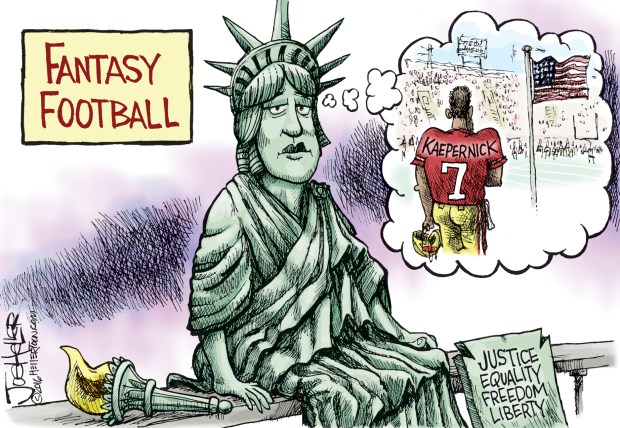 Today’s edition is brought to you by a generous “in-kind” donation during our September fund-raising drive by union goons, for all that fair-and-balanced publicity we promised for Monday’s Labor Day Picnic. 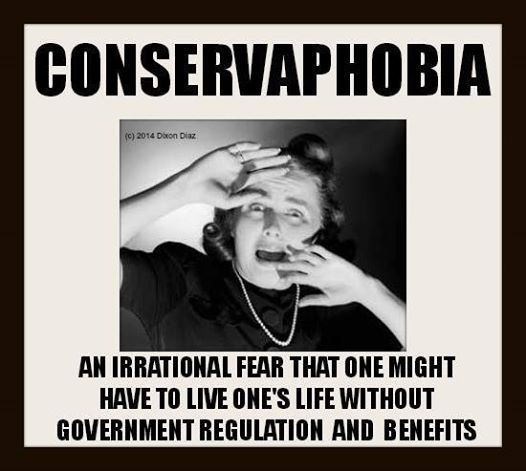 Many Americans today feel a sense of dismay and horror as we see our country in a downward spiral; economically, morally, and politically. President Obama’s indifferent attitude and the continuous list of scandals and bad policy are leading the country to ruin. As an artist I am reminded of the old saying “Nero fiddled while Rome burned.”   History believes that Nero himself may have set the great fire that burned a part of Rome during his leadership.  Afterwards, he blamed it on the Christians who suffered great persecution under his rule.  I see great similarities to what we are experiencing today.  Obama fiddled, while the people witnessed the demise of America.   Jon McNaughton 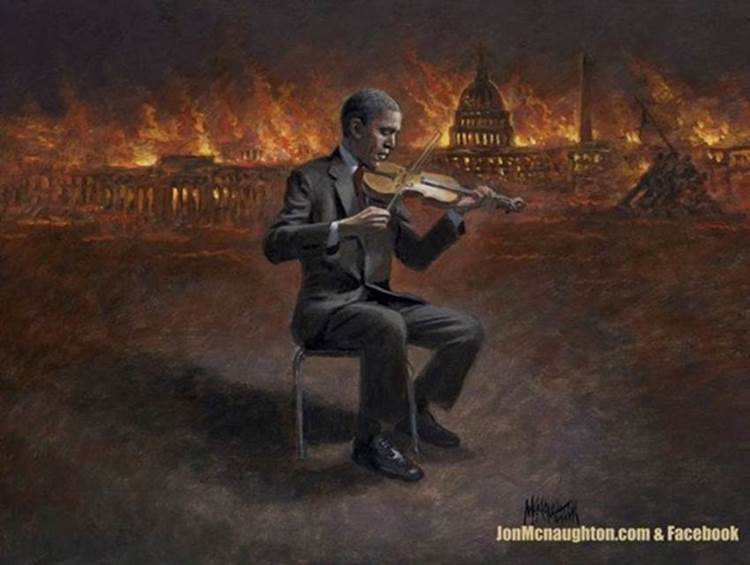