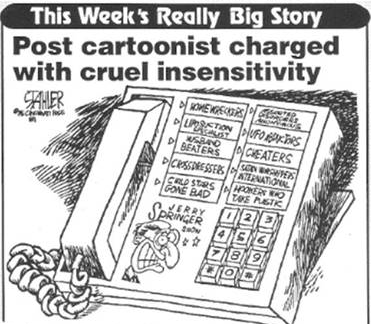 Edition #70 (published on October 1, 1991) of the original printed edition of The Whistleblower (not the Newswire) was delivered to Persons of Consequence all over town. It was our “Silly and Banal” Issue, according to Cincinnati Magazine’s 1991 “Best and Worst” Awards, and our REALLY BIG STORY was all about the Cincinnati Post Editorial Cartoonist Jeff Stalker’s being charged with cruel insensitivity. Our TOP TEN LIST listed was the top ten Iraqi secret weapons programs discovered by the U.N. inspectors in Baghdad. There was an item about financially troubled Covington Landing, and Libertarian Cincinnati School Board Candidate Jim Berns was opposing the board’s 38% tax increase. 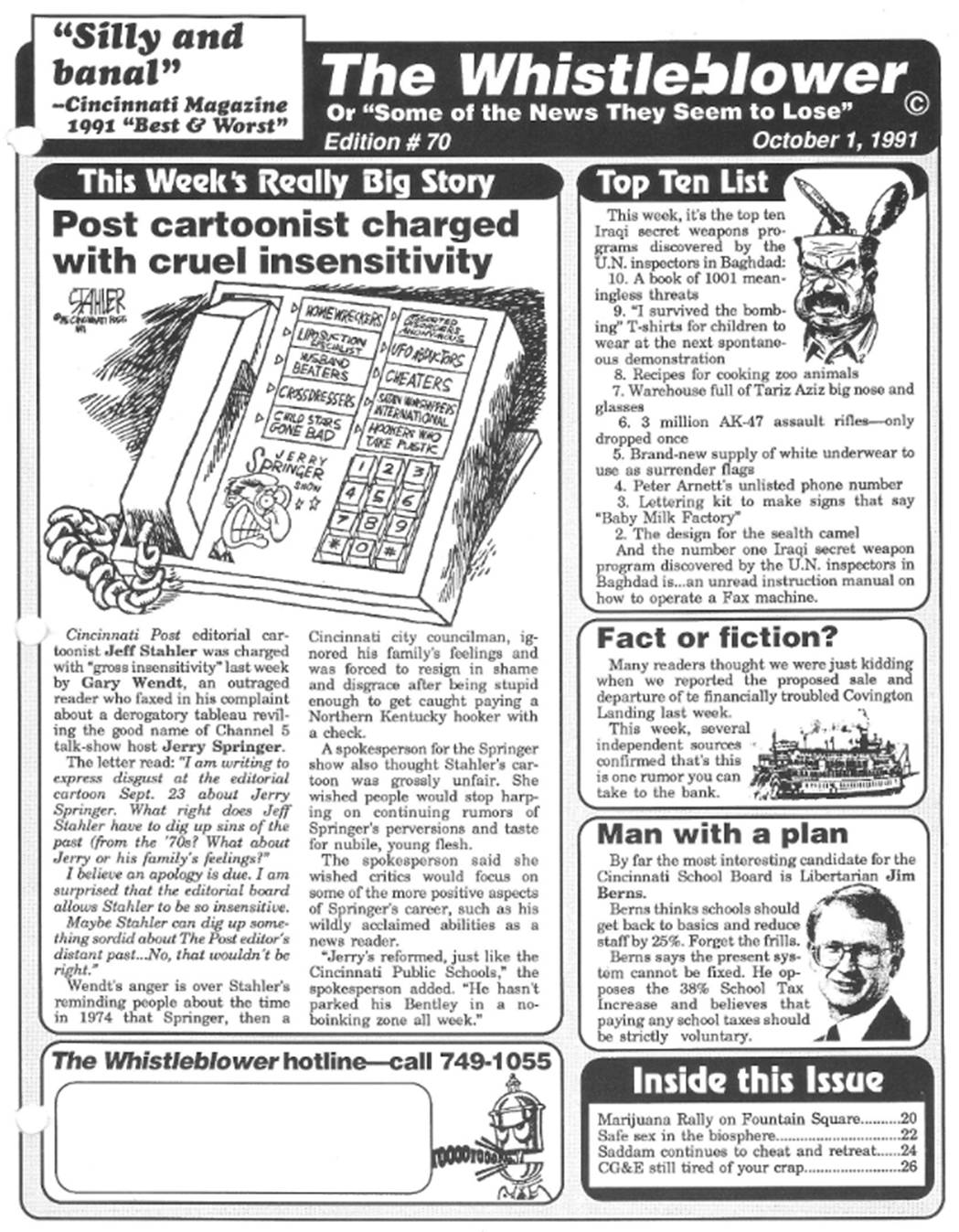 PAGE TWO featured another REAL EDITORIAL BY PUBLISHER CHARLES FOSTER KANE talking about how the news media was promoting that 38% school tax increase. REAL FACTS told how the Ohio Department of Commerce had bought five full pages of very expensive advertising in the Cincinnati Enquirer to list the names and addresses of people whom they had not been able to find in order to distribute some unclaimed funds. There was a report on that publicity stunt scam where WEBN’s “Wildman Walker” was supposed to stay up on a billboard until the Bengals won and game, and Bengals coach Sam Wyche was slammed in that week’s WHISTLEBLOWER LIMERICK CONTEST. 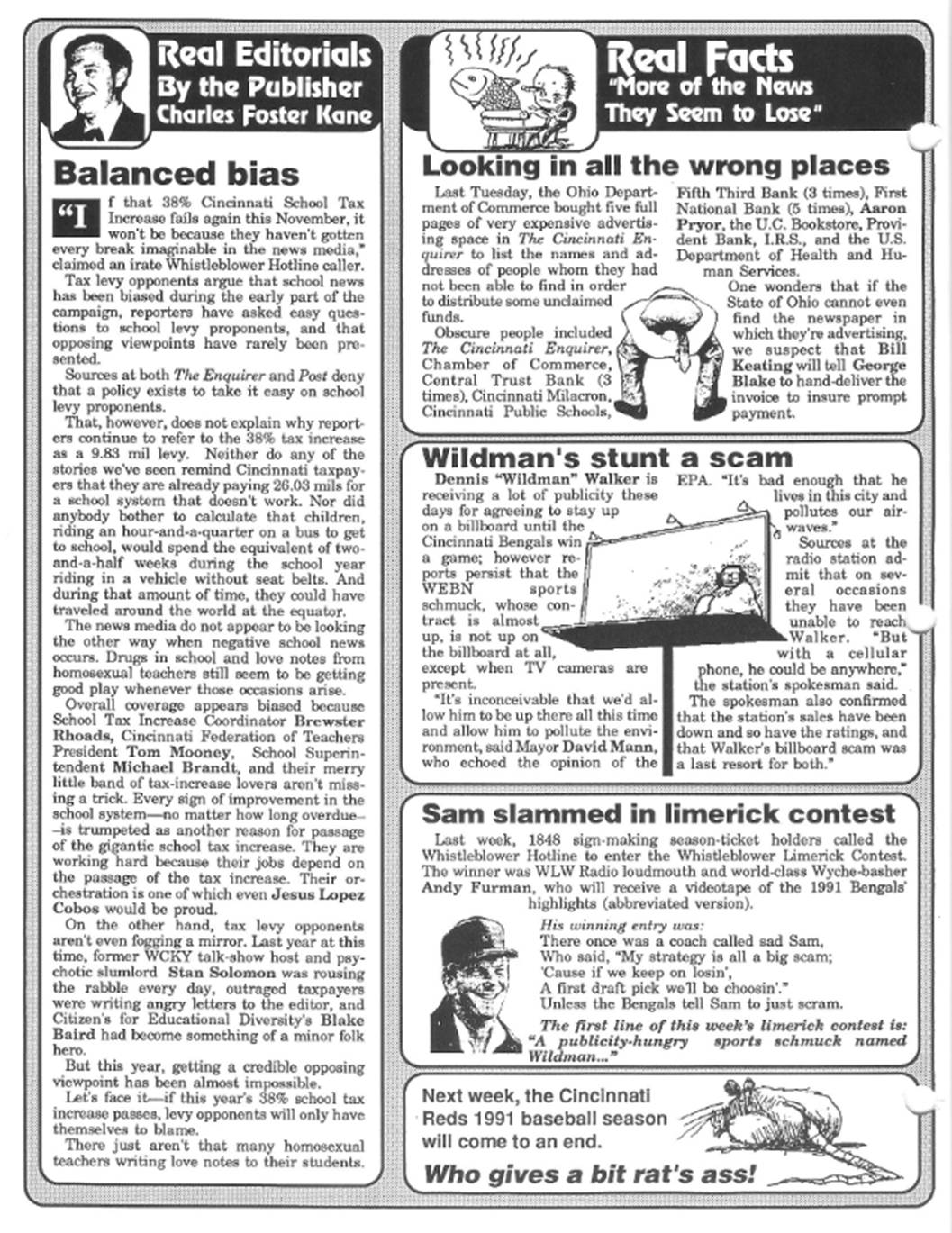 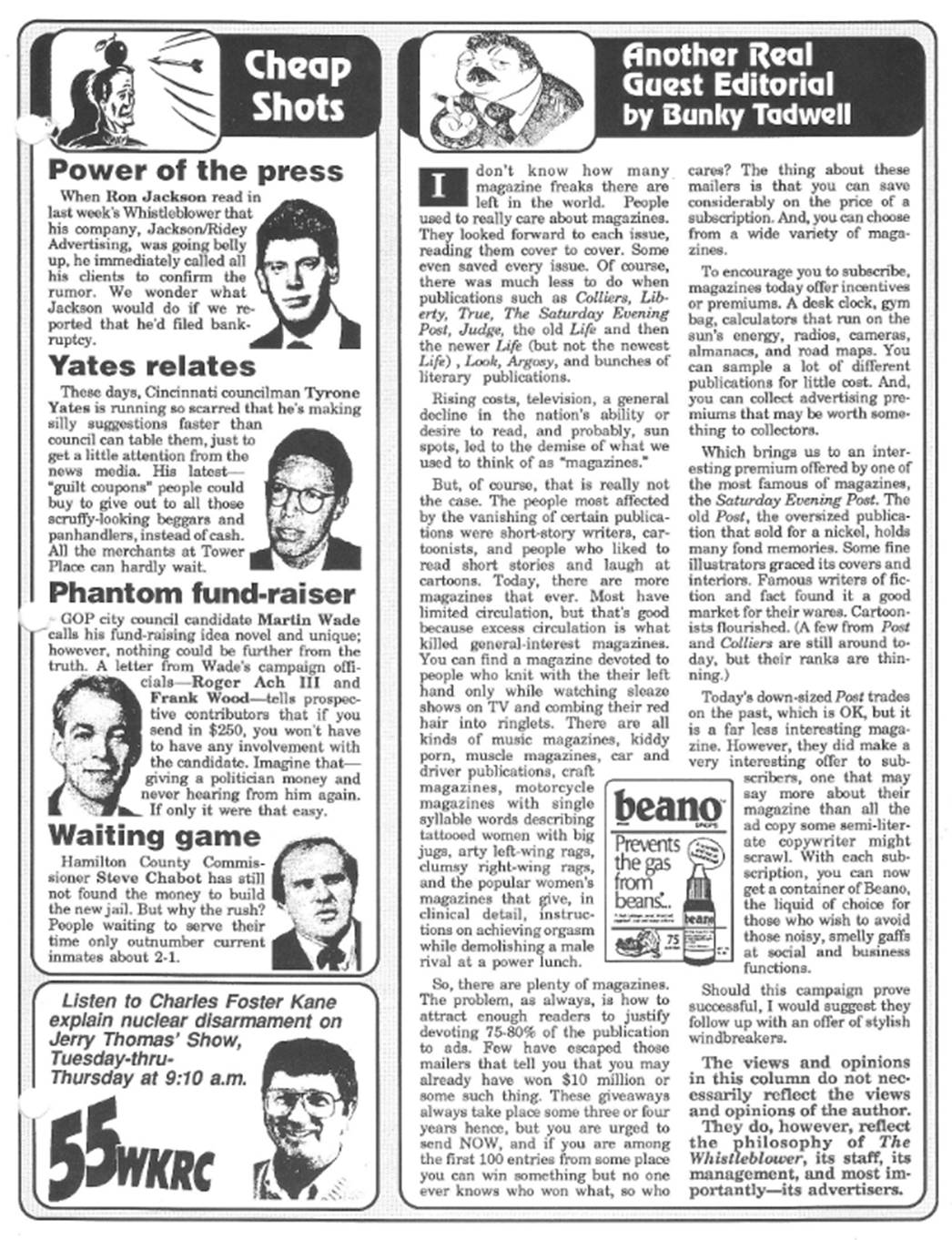 PAGE FOUR featured the REAL LETTERS FROM REAL SUBSCRIBERS, and during all those years, not a single one of those people has ever called to complain that their letter might not have been real. In ANOTHER EXCLUSIVE WHISTLEBLOWER REPORT, we discovered Hamilton County GOP Party Boss Gene Ruehlmann’s secret strategy for winning the 1991 Cincinnati Council Elections. The Whistleblower denied “inaccurate reporting” in CERTIFIED TRUE, and Elroy Stench was our UNITED APPALL PERSON OF THE WEEK. Plus there was an ad for the 38% School Tax Levy Increase, paid for by Citizens for a Mediocre Education. 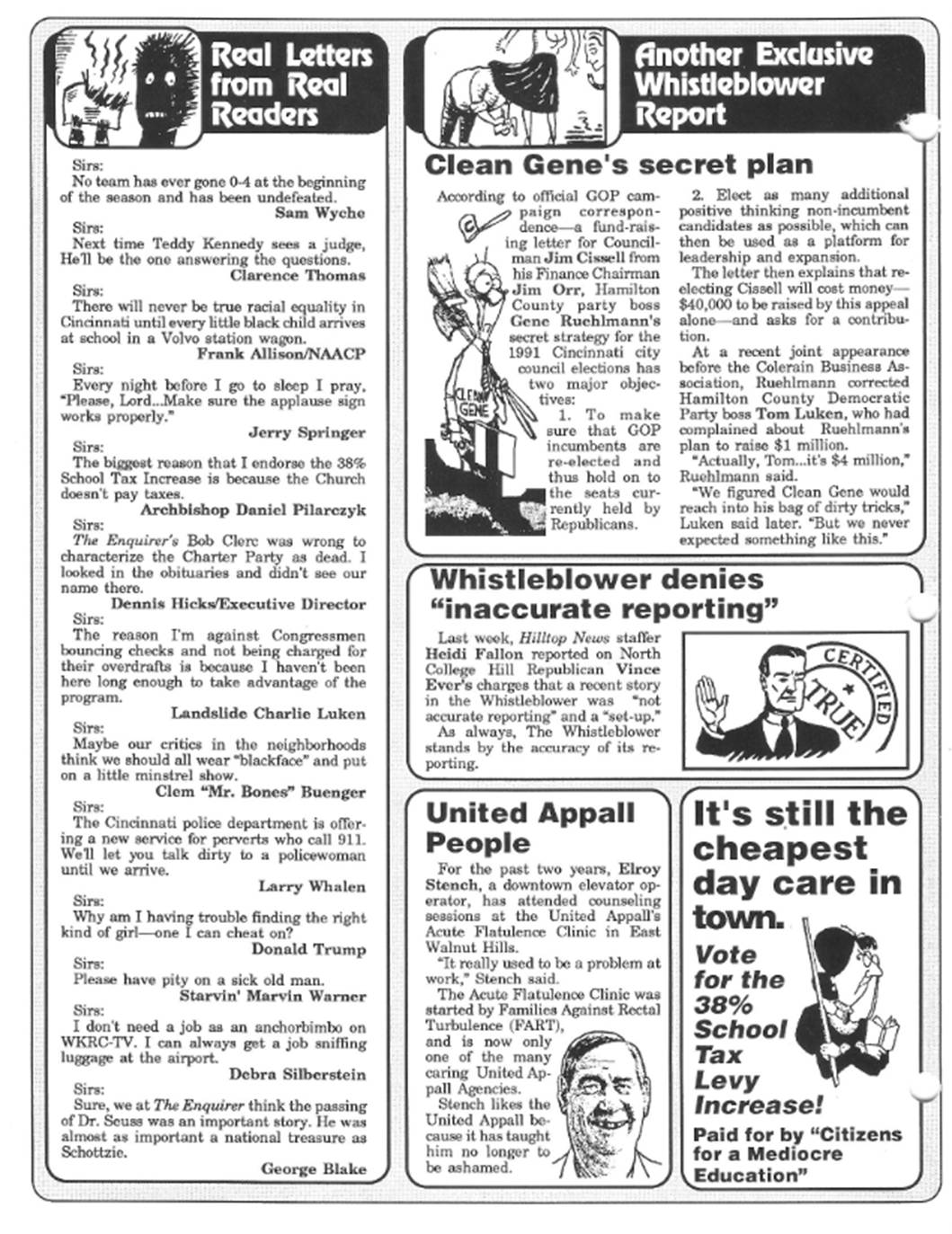 And PAGE SIX included HOTLINE HANG-UPS, with some of the anonymous calls we received last week on the Whistleblower Hotline. And right before those FAKE CLASSIFIED ADS, Whistleblower Gossip Columnist Linda Libel had much to say about people like Enquirer radio-TV Critic John Kiesewetter, Jennifer Kent, Dan Andriacco, the Chippendales, Charlie Keating, and Jerry Springer. 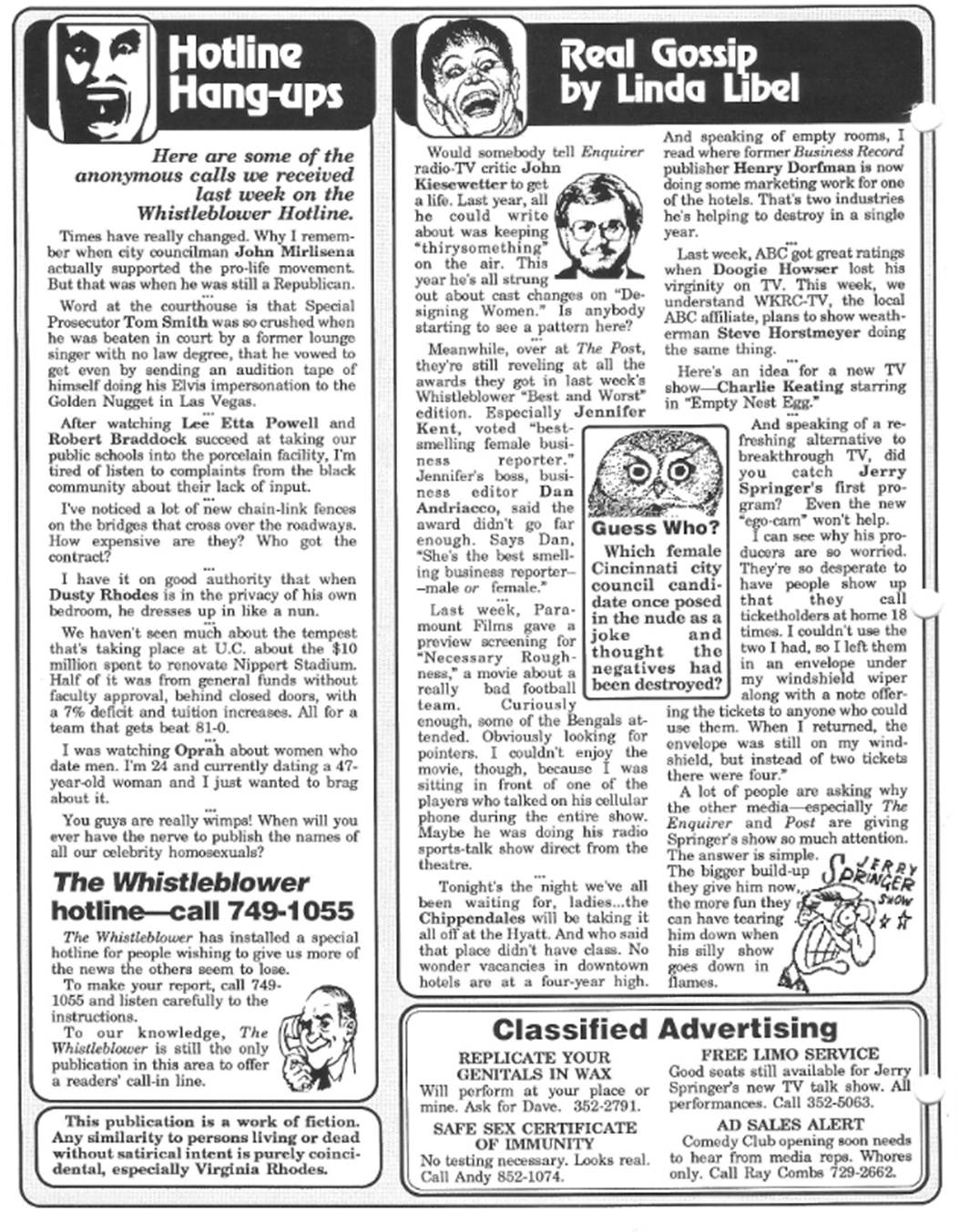