TODAY IS
SATURDAY, JUNE 11, 2022
TRUMP’S FIVE HUNDRED-AND-SEVENTH DAY OUT-OF-OFFICE
AND THIS PROVES THE BLOWER’S BEEN RIGHT FOR THE PAST THIRTY-TWO YEARS 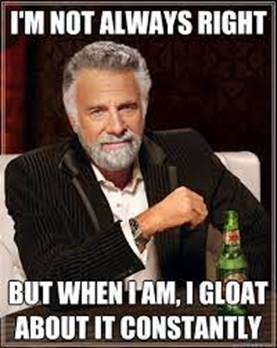 • Gannett owns the USA Today Network which takes in hundreds of local newspapers
• A committee of editors advised in April that readers didn’t want to be told what to do or how to think
• They said readers perceived them as having a ‘biased agenda’ so were canceling subscriptions
• Now, the company is decreasing its editorial output and even scaling back cartoons
• The newspapers will no longer make political endorsements beyond a local level

America’s largest newspaper chain Gannett has instructed its newsrooms to scale back opinion pieces which are ‘repelling readers’ who do not want to be told what to do.
The newspaper chain owns the USA Today network which takes in hundreds of local newspapers in almost every state across the country.
At a recent editors committee meeting in April, editors said in a presentation: ‘Readers don’t want us to tell them what to think.
‘They don’t believe we have the expertise to tell anyone what to think on most issues. 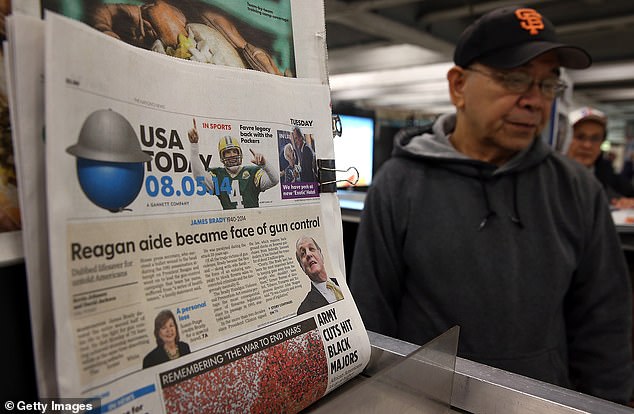 The newspaper chain owns the USA Today network which takes in hundreds of local newspapers in almost every state across the country
‘They perceive us as having a biased agenda,’ according to The Washington Post.
Now, the company will do-away with opinion pieces almost entirely and they will also not allow any endorsement of politicians aside from in local races.
They will no longer endorse presidential candidates, or candidates in House and Senate races.
The only elections they will now cover will be local.

‘Today’s contemporary audiences frequently are unable to distinguish between objective news reporting and Opinion content.
‘In the old days, content appearing on print pages that were clearly labeled helped alleviate those concerns, along with a society that possessed a higher news literacy.
‘But in today’s digital/social environment, we as an industry have been challenged to make these differences clear,’ the editors said in an earlier advisory from 2018.
The editors said they had been losing reader subscriptions as a result of their perceived bias. 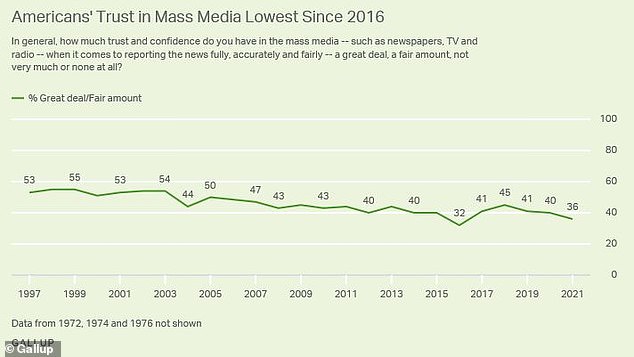 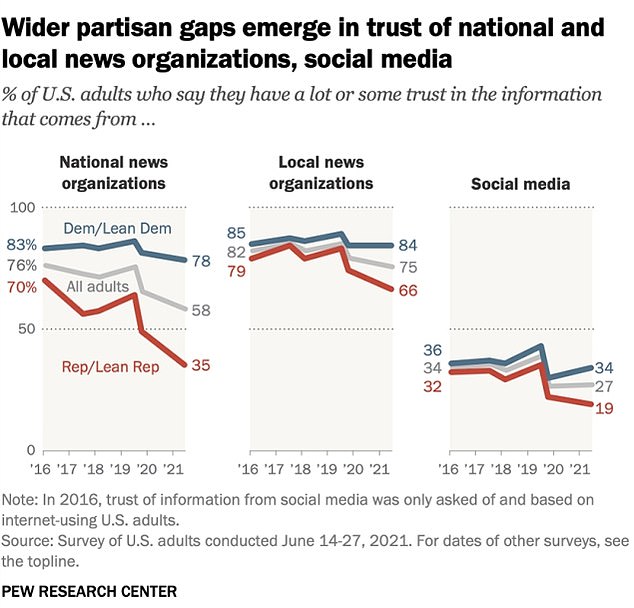 A 2021 Pew Research poll shows how faith in the media has dwindled in the last five years
Readers this week reacted to the news by telling the media company to hire ‘writers that aren’t left-wing activists.’
Americans’ faith in the media has nose-dived in recent years thanks largely to the widely left-wing bias of many national publications and news networks.
The lowest point on record was in 2016, when Donald Trump was elected.
Many felt the media was biased against Trump from the beginning.
In 2021, faith in the media dipped to the second lowest point, with only 36 percent of people saying they had a fair amount of trust in journalists.