WEDNESDAY, JULY 13, 2022
TRUMP’S FIVE-HUNDRED-AND-THIRTY-NINTH DAY OUT-OF-OFFICE
AND WILL P&G SITTENFELD HAVE TO GIVE UP HIS PERSON OF CONSEQUENCE SUBSCRIPTION TO THE WHISTLEBLOWER-NEWSWIRE AS PART OF HIS FEDERAL CORRUPTION SENTENCE? 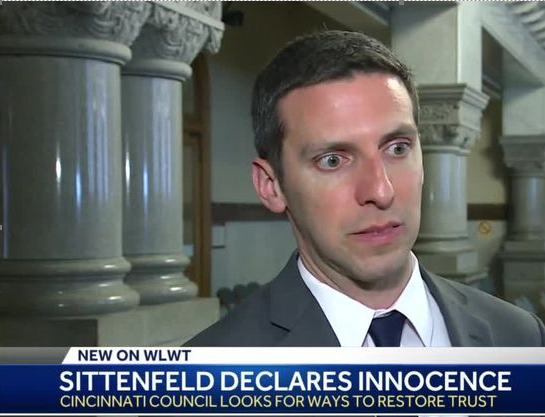 NEARLY THIRTY-ONE YEARS AGO TODAY…Edition #59 (published on July 16, 1991) of the original printed edition of The Whistleblower (not the Newswire) was delivered to Persons of Consequence all over town.

It was our “Translated For Our Politically Impaired” Issue, and our Really Big Story was all Hamilton Prosecutor Art Ney’s request to Judge Crush to release transcripts of the grand jury proceedings on the Great Golf Caper; Our Top Ten List listed the top ten reasons lessons we learned from that same so-called crime. Plus Mayor David Mann and Sheriff Si Leis took part in a Point-Counterpoint debate over jail overcrowding. 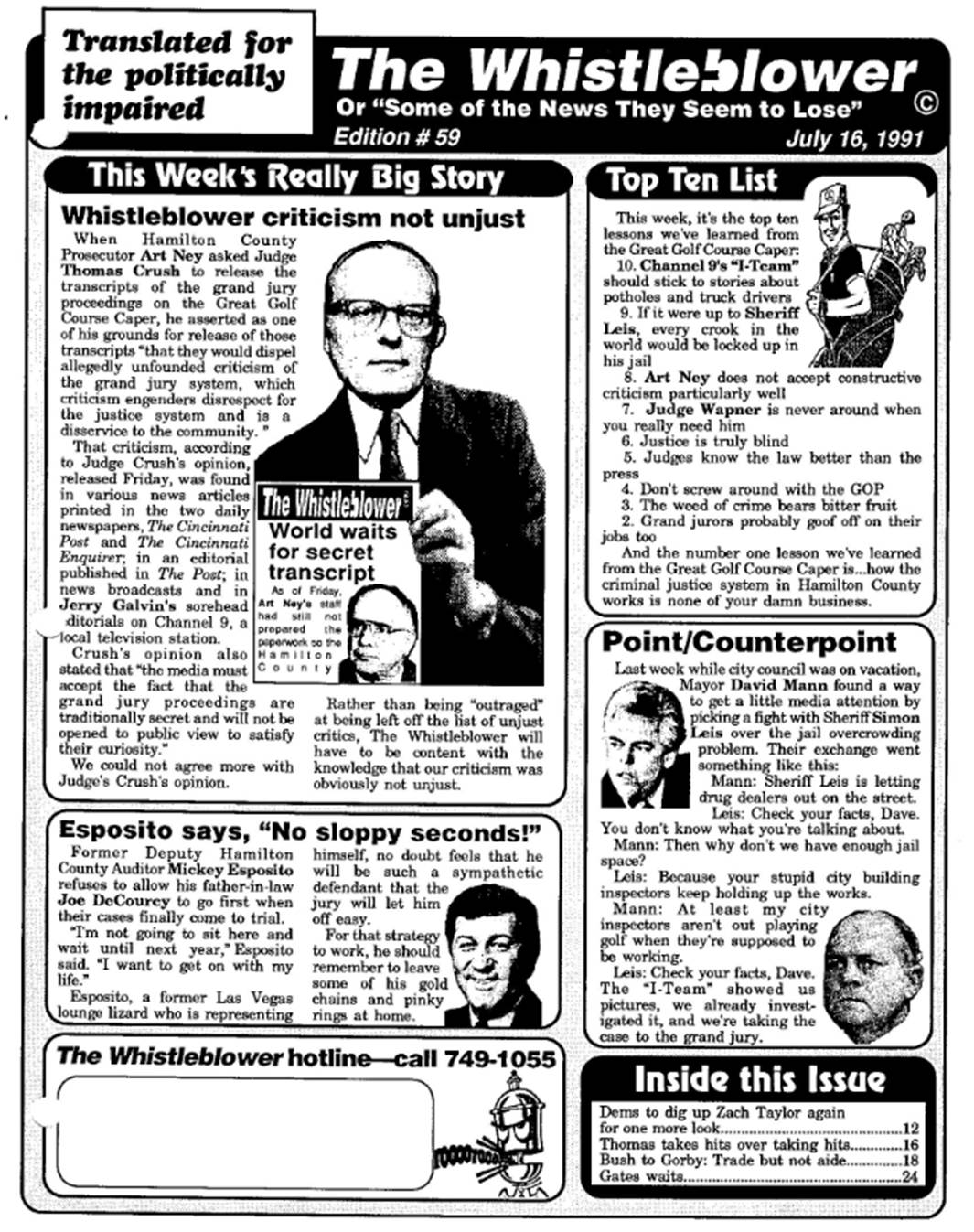 Page Two with Real Editorials by Publisher Charles Foster Kane about how whenever one of the local TV stations changes one of its newsreaders, they try to make you believe that one of their anchor people has been elevated to the level of a deity. Real Facts reported the reason the Fairfield City Council rejected that proposal to proclaim July 21 First Amendment Day. Hamilton County Commissioner Steve Chabot was chastised in the Weekly Whistleblower Limerick Contest. There was a promo for Whistleblower Publisher Charles Foster Kane’s appearance on a 55 WKRC Radio program. Plus Whistleblower Wisdom explained Judge Crush’s decision not to release secret grand jury testimony following its failure to indict those Hamilton County Building Inspectors. 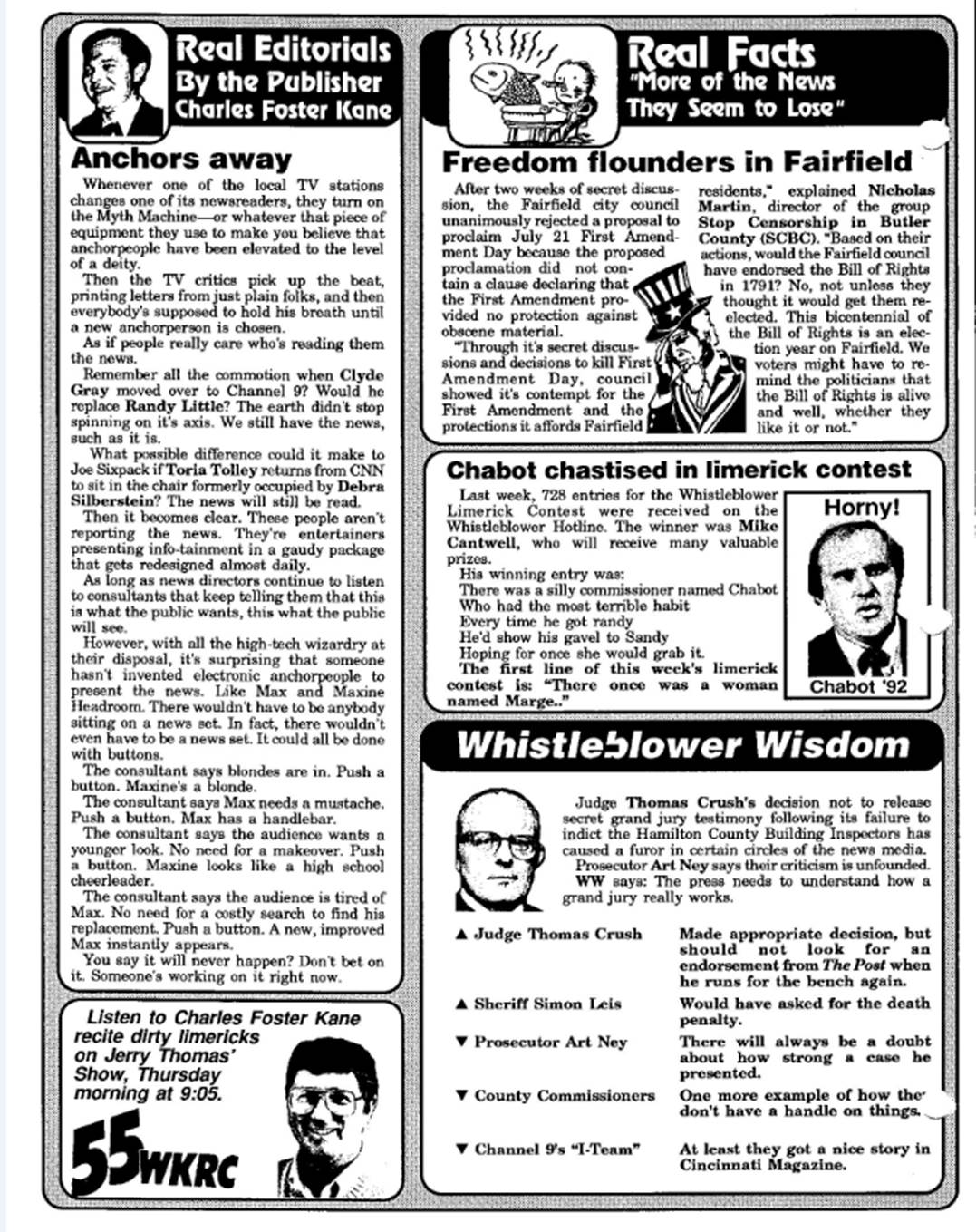 Page Three featured Cheap Shots at Kentucky Post Editor Judy Clabes, Shirley Bernstein, Jim Knippenberg, and Hamilton County Commissioner John Dowlin, There was also another Real Guest Editorial by Bunky Tadwell (this one was about the nerve of President George Herbert Walker Bush to nominate a Black man for the Supreme Court). 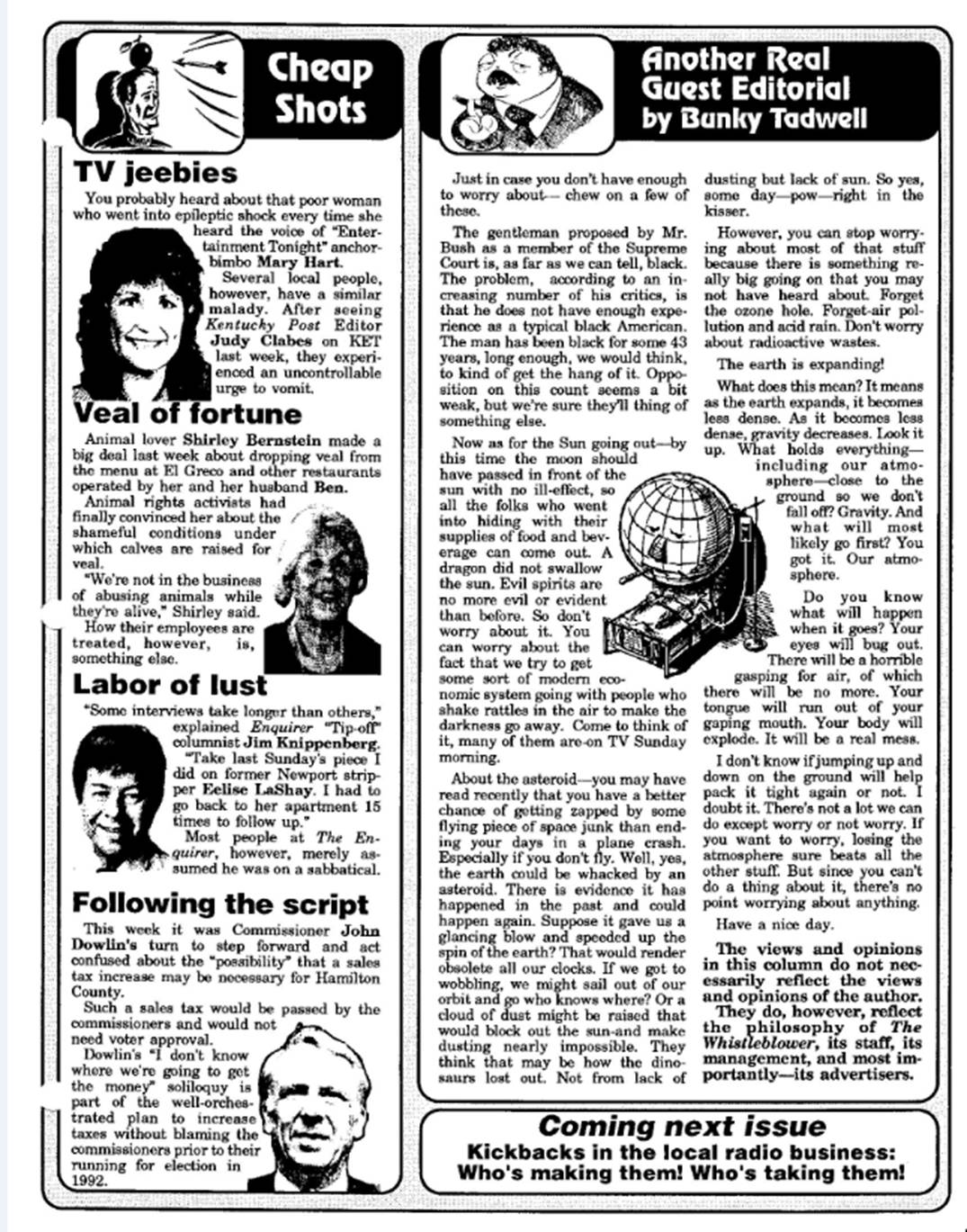 Page Four was for our regular weekly Real Letters From Real Readers column, and Another Exclusive Whistleblower Report featured a story how the Hamilton County Courthouse was becoming a media circus. 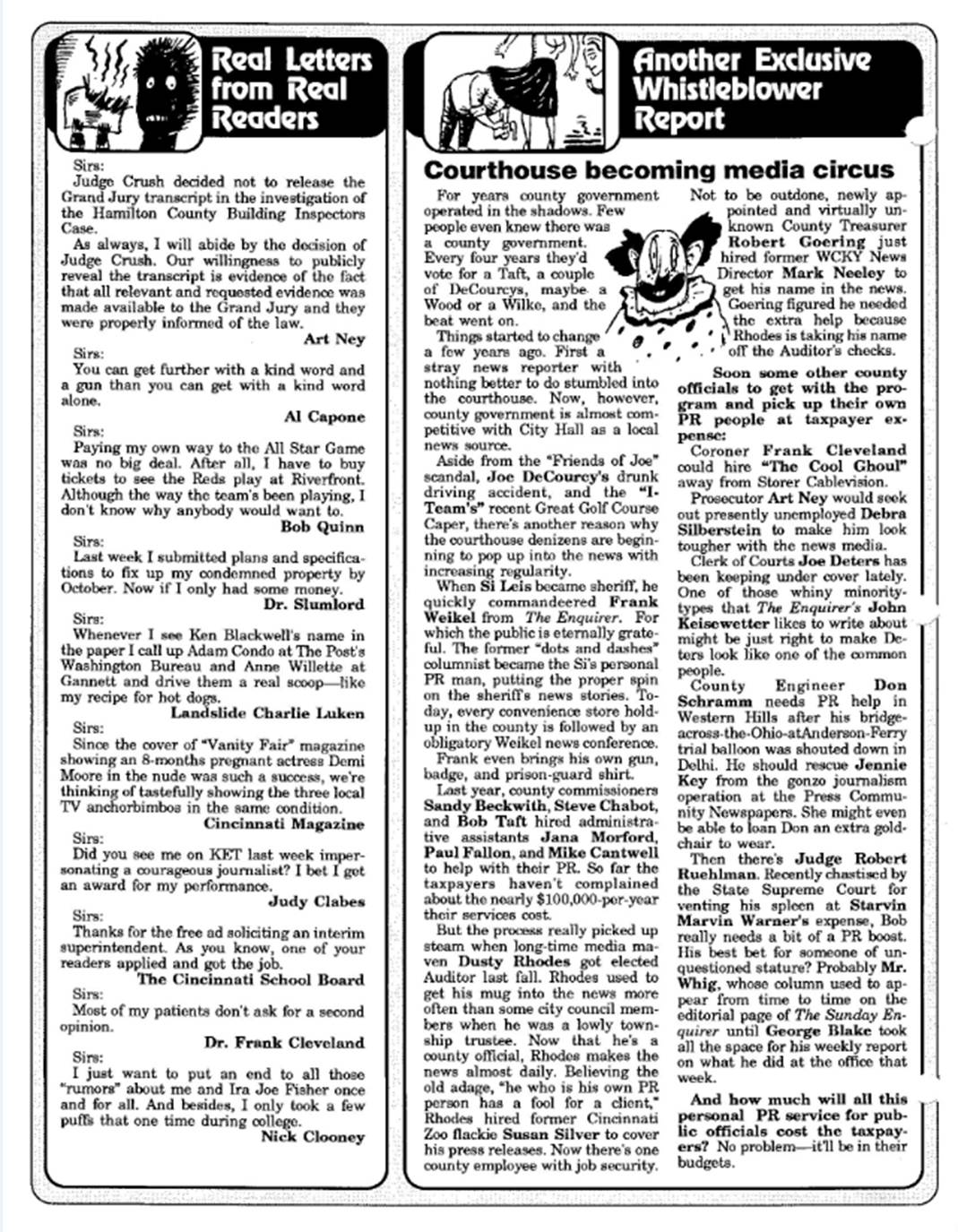 Page Five featured Ken Camboo’s Bluegrass Holler saying first we should kill all the lawyers, and then start in on the politicians. Northern Kentucky Bureau Chief J.R. Hatfield was talking about guys who liked looking a woman’s naked breasts in dimly lit bar rooms. There was also an ad for Jeff Ruby’s School for Elegant, Exciting Egress. We can hardly wait to hear all the details of that. 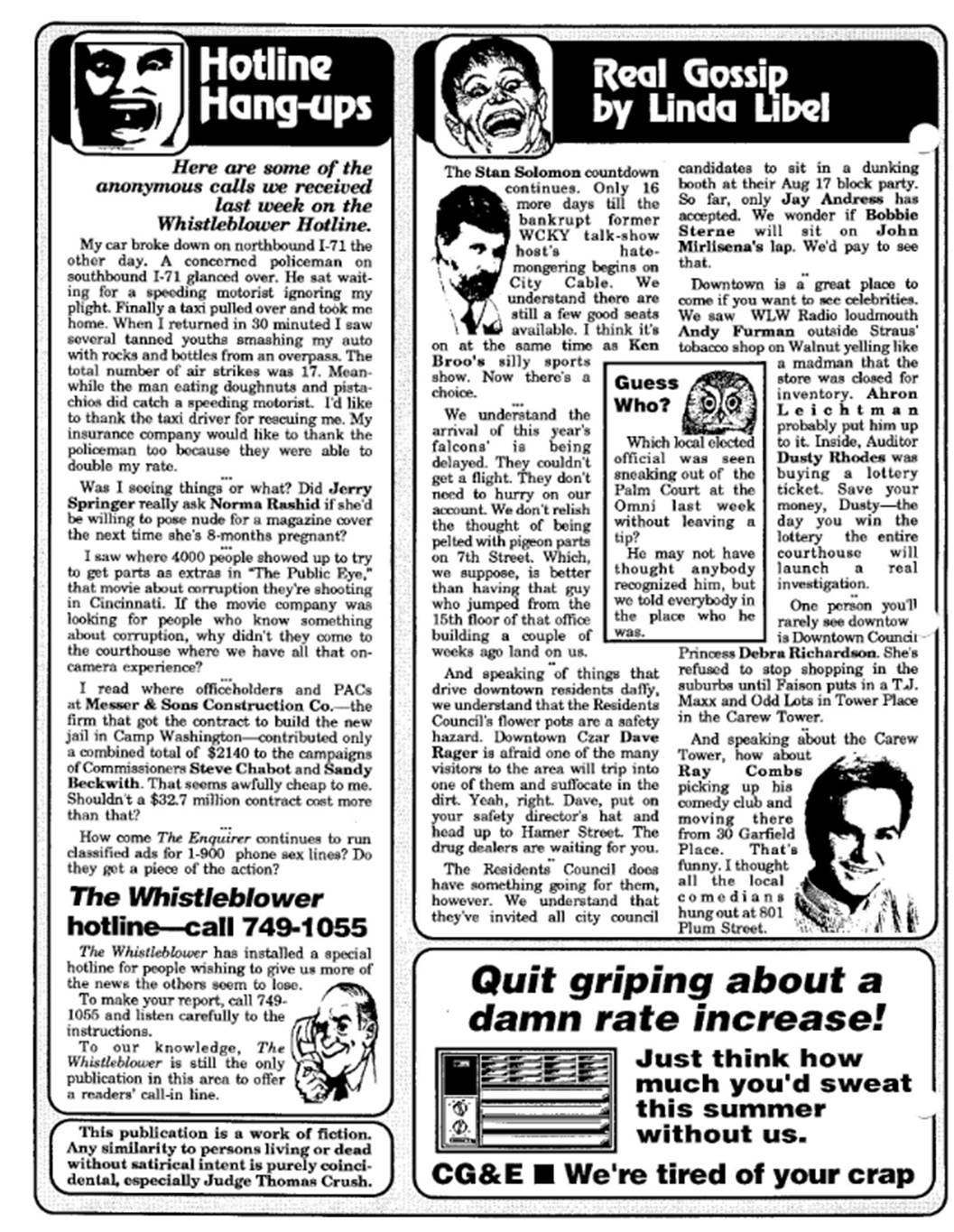