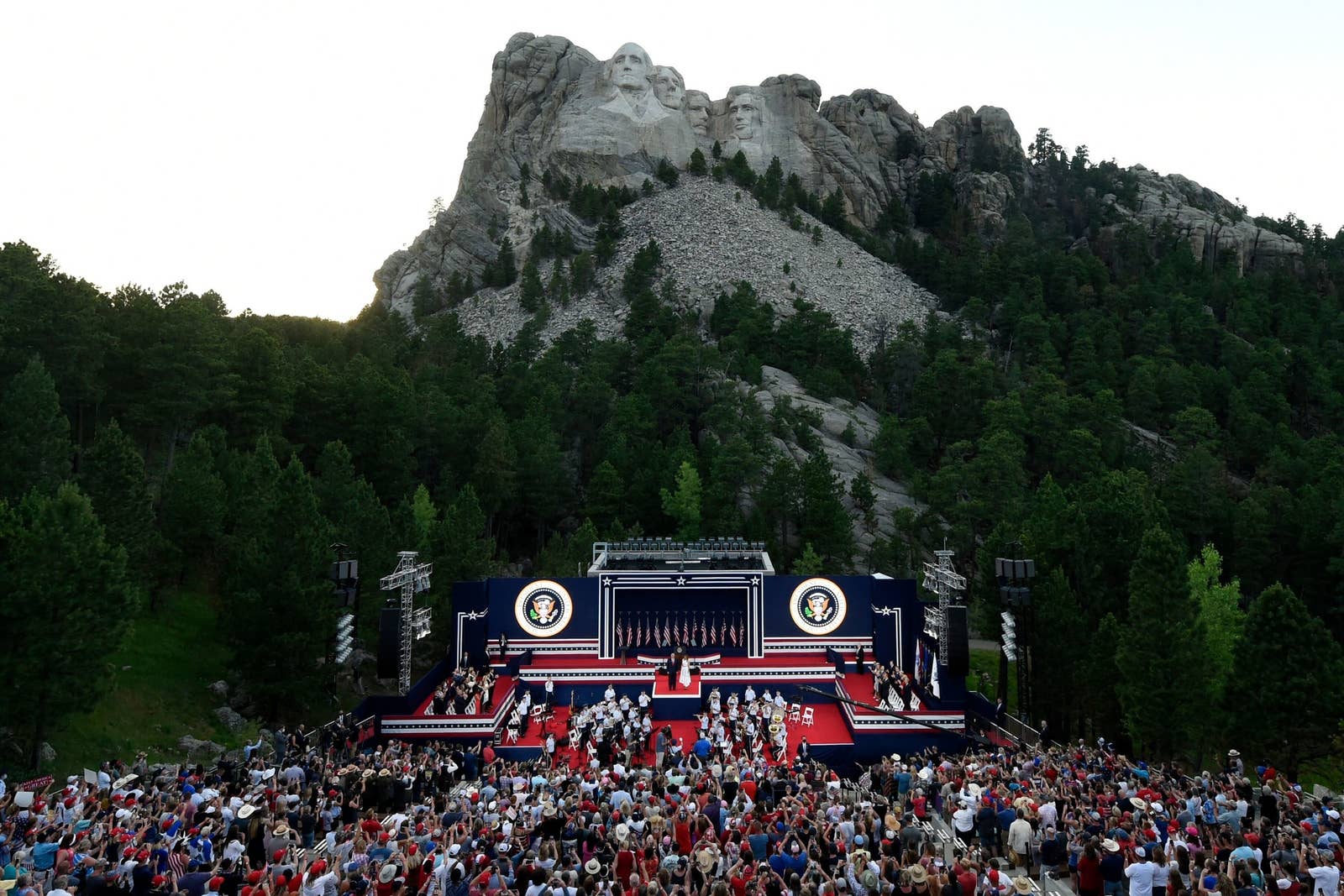 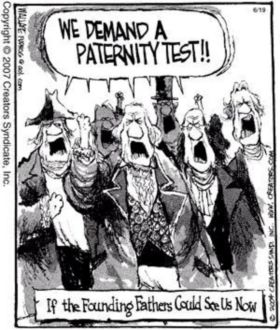 Our Founding Fathers have been spinning in their graves watching what’s going on in Washington ever since Obama was elected.

And if they were alive today on the 245th anniversary of the Declaration of Independence’s adoption by the Continental Congress and saw how this nation has become a feckless flock of Dumbed-Down, Self-Absorbed, Media-Influenced, Celebrity-Obsessed, Politically-Correct, Uninformed, Short-Attention-Span, Free-Stuff Grabbing, Low-Information Voters Who Didn’t Complain When Cheating D-RATS Put Joke Biden* In The White House.

With that in mind, we’re pleased once again to bring you this commentary on our Founding Fathers’ sacrifice:

Have you ever wondered what happened to the 56 signers of the Declaration of Independence? Here’s the legend: 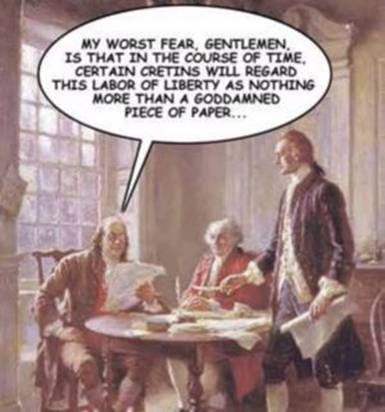 Five signers were captured by the British as traitors, and tortured before they died. Twelve had their homes ransacked and burned. Two lost their sons serving in the Revolutionary Army, another had two sons captured. Nine of the 56 fought and died from wounds or hardships of the Revolutionary War.

They signed and they pledged their lives, their fortunes, and their sacred honor. What kind of men were they?

Twenty-four were lawyers and jurists. Eleven were merchants, nine were farmers and large plantation owners; men of means, well educated. But they signed the Declaration of Independence knowing full well that the penalty would be death if they were captured.

Carter Braxton of Virginia, a wealthy planter and trader, saw his ships swept from the seas by the British Navy. He sold his home and properties to pay his debts and died in rags.

Thomas McKeam was so hounded by the British he was forced to move his family almost constantly. He served in Congress without pay, and his family was kept in hiding. His possessions were taken from him, and poverty was his reward. Vandals or soldiers looted the properties of Dillery, Hall, Clymer, Walton, Gwinnett, Heyward, Ruttledge, and Middleton.

At the Battle of Yorktown, Thomas Nelson, Jr., noted the British General Cornwallis had taken over the Nelson home for his headquarters. He quietly urged General George Washington to open fire. The home was destroyed, and Nelson died bankrupt. Francis Lewis had his home and properties destroyed. The enemy jailed his wife, and she died within a few months.

John Hart was driven from his wife’s bedside as she was dying. Their 13 children fled for their lives. His fields and his gristmill were laid to waste. For more than a year he lived in forests and caves, returning home to find his wife dead and his children vanished. A few weeks later he died from exhaustion and a broken heart. Norris and Livingston suffered similar fates.

AUTHOR UNKNOWN: Portions of this essay have been bouncing around the internet for many years. (Rush Limbaugh even claims his dad wrote it if you can believe that.) One thing’s for sure, you’ll never see any of this truly patriotic stuff being reported today by our Kneepad Liberals in the Press. 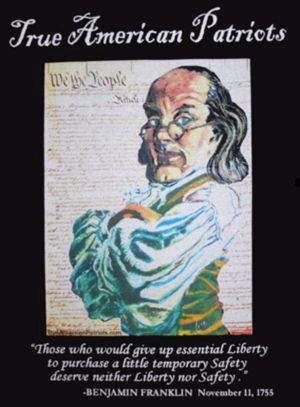 Such were the stories and sacrifices of the American Revolution. Although some people (including Snopes.com) might dispute some of the details contained in these stories, these men were not wild-eyed, rabble-rousing ruffians. They were soft-spoken men of means and education. They had security, but they valued liberty more.

Or maybe it was just that our Founding Fathers were a bunch of rich white men who didn’t want to pay higher taxes. Let’s hear it for the Anti-Taxers.

Standing tall, straight, and unwavering, our Founding Fathers pledged: “For the support of this declaration, with a firm reliance on the protection of the divine providence, we mutually pledge to each other, our lives, our fortunes, and our sacred honor.”

They gave you and me a free and independent America. The history books never told you a lot of what happened in the Revolutionary War. We didn’t just fight the British. We were British subjects at that time and we fought our own government! Most of us take these liberties so much for granted…We shouldn’t.

So, take a couple of minutes while enjoying this 245th Independence Day holiday and silently thank these patriots. And while you’re at it, thank all our brave men and women fighting terrorism around the world to help keep you safe at home. It’s not too much to ask for the price they’re paying.

Remember: “Freedom is Never Free!” It’s time we get the word out that patriotism is NOT a sin, and Independence Day has more to it than beer, picnics, and politicians marching in parades, like tomorrow’s Holy Homophobic Islamophobic Redskins-Mascot-Loving Heterosexual Independence Day Parade in Anderson, where only Straight White, God-Fearing Citizens of Anderson will be permitted to march in the Patriotic Procession (RAIN OR SHINE), after meeting at 9:30 AM behind Anderson Trustee Andy Pappas’ Cleaner Concepts located at 7857 PFC James Miller IV and Staff Sergeant Richard T. Pummill Memorial Highway. 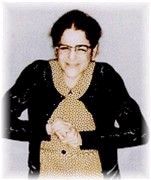 Now with an opportunity to express her patriotism, we have today’s editorial reply from Conservative Critic Will duRant IV’s wife Emily:

What’s this I hear about people celebrating “In Depends Day?”

Who would EVER want to CELEBRATE going around in DEPENDS?

Finally, Bluegrass Bureau Chief Ken CamBoo says since we’re all celebrating Independence Day today, he finds it odd that Independence, Kentucky (the town for which today’s holiday was named) was incorporated in 1842, many years after the Declaration of Independence was actually signed. 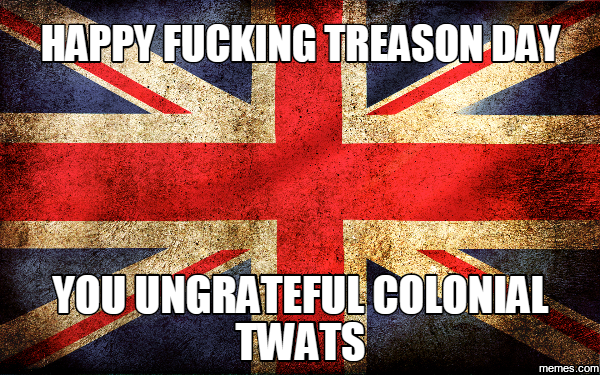 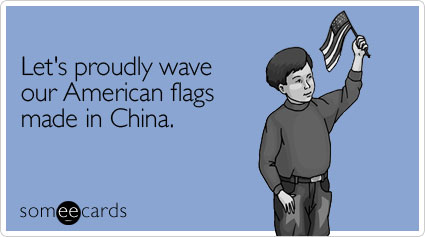 Today’s Whistleblower is brought to you by a generous “in-kind” donation during our July fund-raising drive from the Chinese Flag Manufacturing Association.

Now Here’s What You Really Need To Know About The Trumpster’s “Salute To America.’’