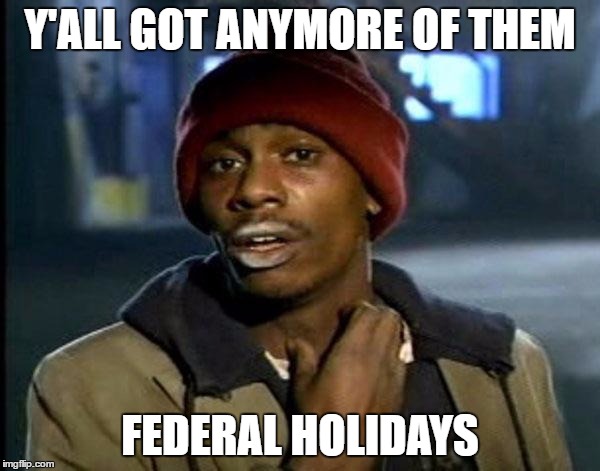 With the stroke of his pen Thursday, Illegitimate Resident Joke Biden* signed legislation giving millions of federal employees Friday off to celebrate today’s new federal holiday, Juneteenth. This makes 44 paid days off for the average federal employee annually, which is nearly nine full weeks of paid time off each year

This week in Patronage County, every politician plans to take part in the 49th Annual Patronage County Watergate Day festivities, and our three Corrupt County Commissioners were discussing how things went.

“We’ll now have another paid legal holiday for politicians and bureaucrats, and the news media has another event to hype,” said Commissioner Filch. “June 17 has become a real reason to celebrate. Remember back in 1982 on the tenth anniversary of the Watergate break-in when former President Nixon was even on hand to place a wreath on the Tomb of the Unknown Politician?”

“But now everybody’s trying to take credit for the holiday to commemorate the night five burglars in business suits bungled their way into the D-RAT National Headquarters at the Watergate Hotel,” added Commissioner Pilfer. “Walter Cronkite even claimed the news media created it.”

“But no,” said Commissioner Swindle, speaking out of both sides of his mouth. “Public employees need a little more time off between Memorial Day and July 4. True, our people got to hand out literature in front of the polls on May 6, but primary elections don’t come along every day. We wanted something permanent—not like a temporary tax that you have to keep asking for.”

Still, people disagree over the difference between what the new media causes. One editorial writer almost lost his job when he wrote that the Watergate investigation had been produced by the legislative and judicial branches of our government.

And still the controversy rages over who is responsible for Watergate Day. “A thousand years from now people will still remember,” Cronkite had predicted. “If you think the attack on Pearl Harbor was a day that will live in infamy, you ain’t seen nothing yet.”

“Corruption is the real cornerstone of our political system,” argues Swindle. “Without elected officials like us, the country would never be where it is today.”

This op-ed column first appeared in the feisty Mt. Washington Press personally edited by eminently renowned publisher Dennis Nichols on June 16, 1982, and has been updated with current references to fit the situation today.