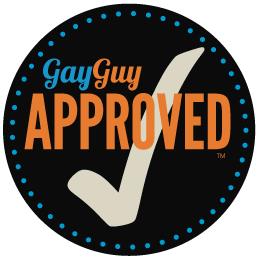 TODAY IS
WEDNESDAY, JUNE 15, 2022
TRUMP’S FIVE-HUNDRED-AND-ELEVENTH DAY OUT-OF-OFFICE
AND EVEN THIRTY-ONE YEARS AGO, THE BLOWER WAS CELEBRATING GAY PRIDE MONTH

Edition #55 (published on June 18, 1991) of the original printed edition of The Whistleblower (not the Newswire) was delivered to Persons of Consequence all over town. It was our Annual Gay-Bashing Issue, and our Really Big Story was all about “Sickness in the Health Department,” after Cincinnati City Councilman Jim Cissell was accused of not being “politically correct” by a gang of outraged homosexuals who had gathered outside the Board of Health with signs that said, “That Cissell, He Sucks!” Our Top Ten List listed the Top Ten Pickup Lines overheard at the previous Saturday’s Gay Pride Rally on Fountain Square.  And in “Dirty Ditties,”  the Politically Correct Police were investigating charges that a songbook published by Kappa Kappa Psi fraternity contained “sexist” and “anti-gay” messages, according to a story in the UC News Record. 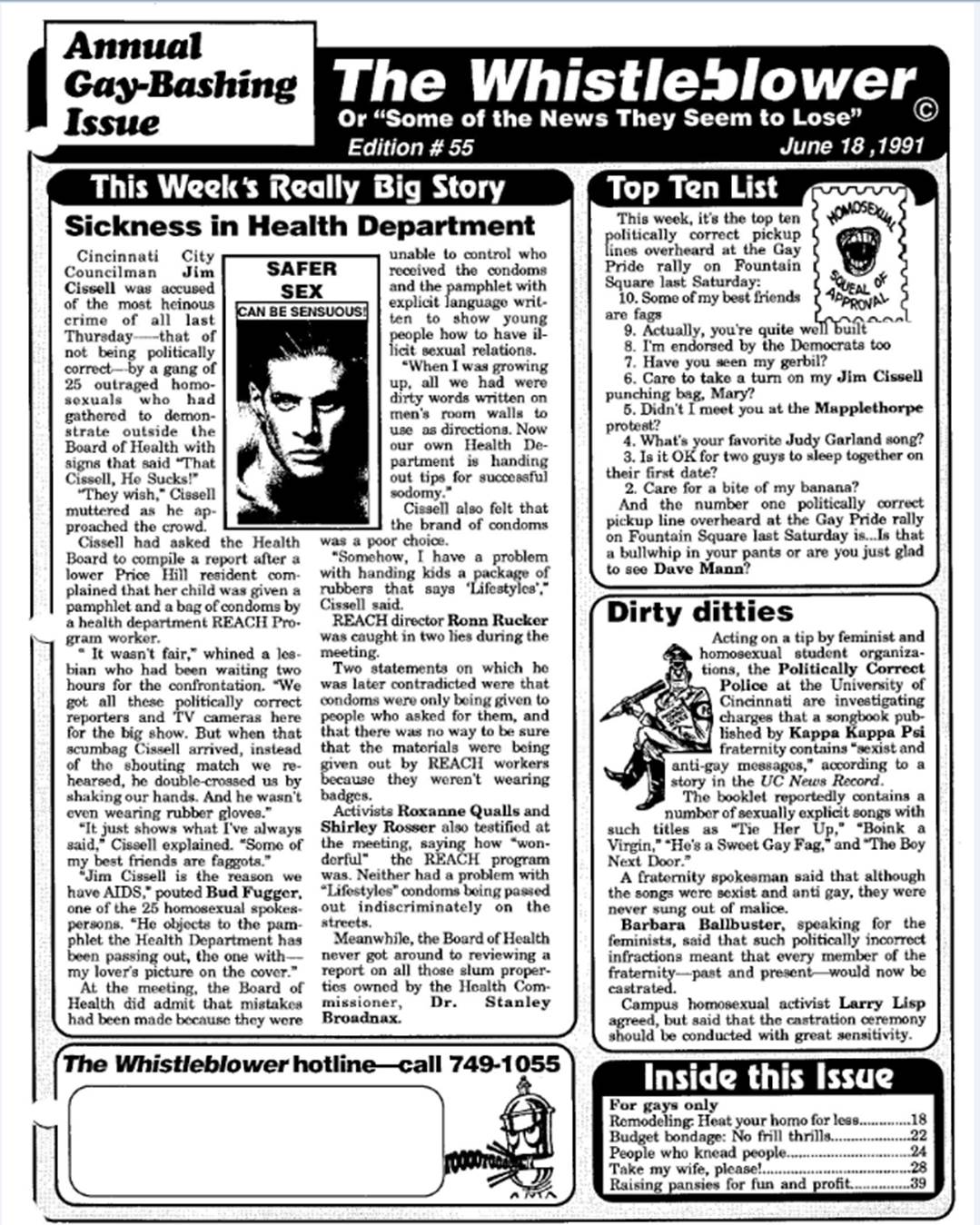 Page Two with Real Editorials by Publisher Charles Foster Kane about “The Whistleblower Newsroom Challenge” for other newsrooms in the area. Real Facts reported how the newly named head of the Hamilton County Demo-Labor Party Tom Luken was telling the hags and fags to pack their bags.  Plus there was an item about some of the offensive material being passed out indiscriminately to young people on the streets of Cincinnati by REACH program workers, along with Jerry Springer’s testimonial for Beano. 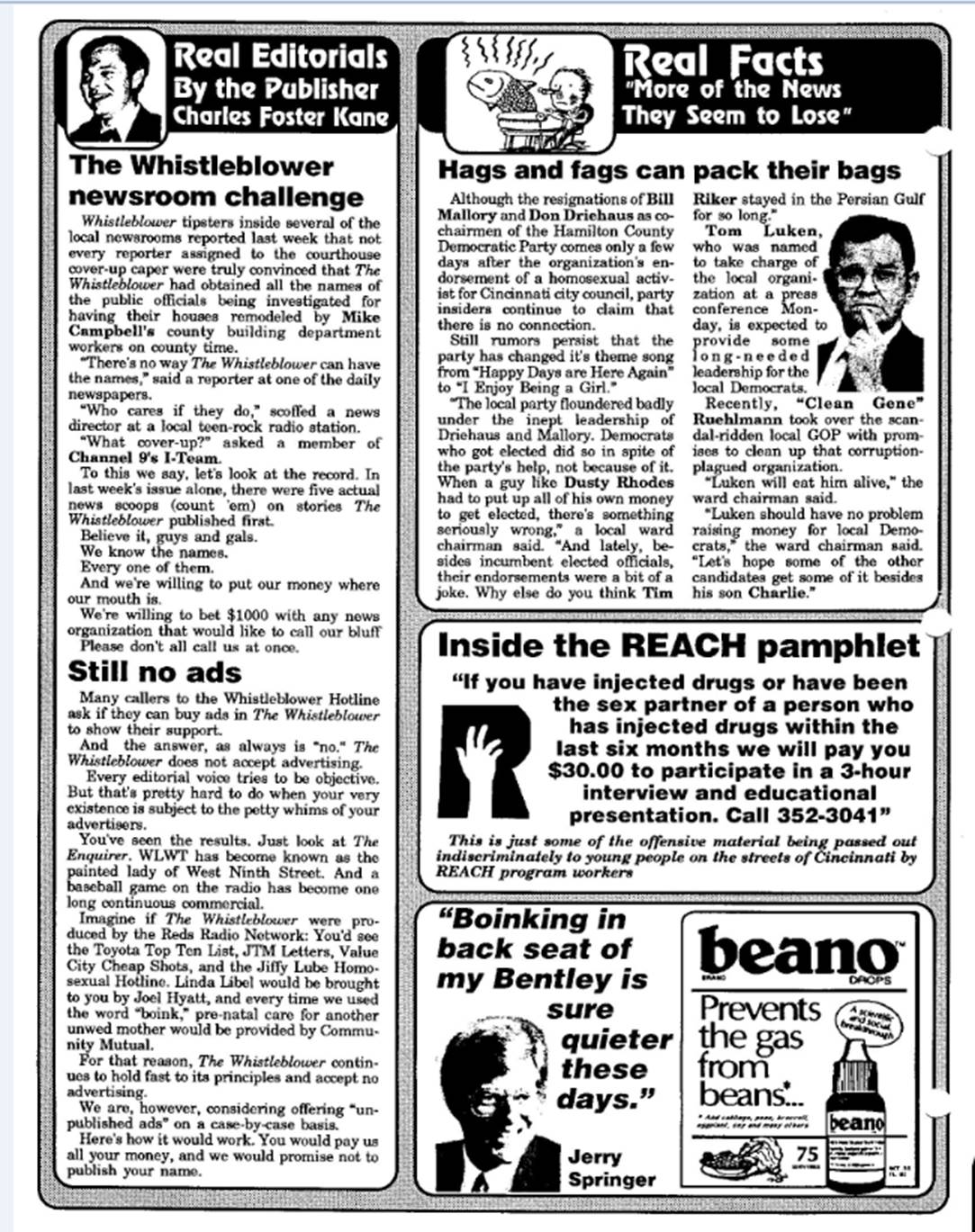 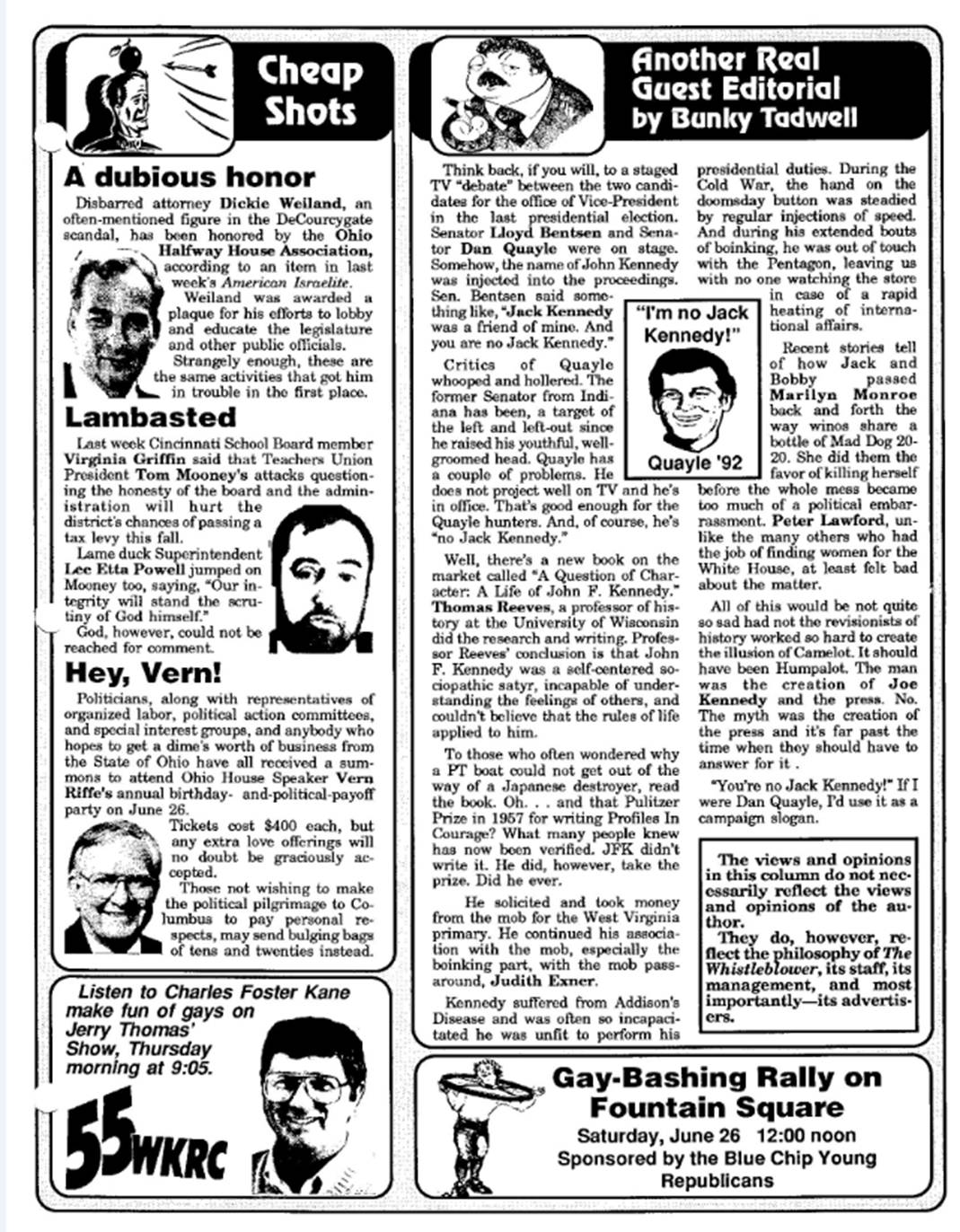 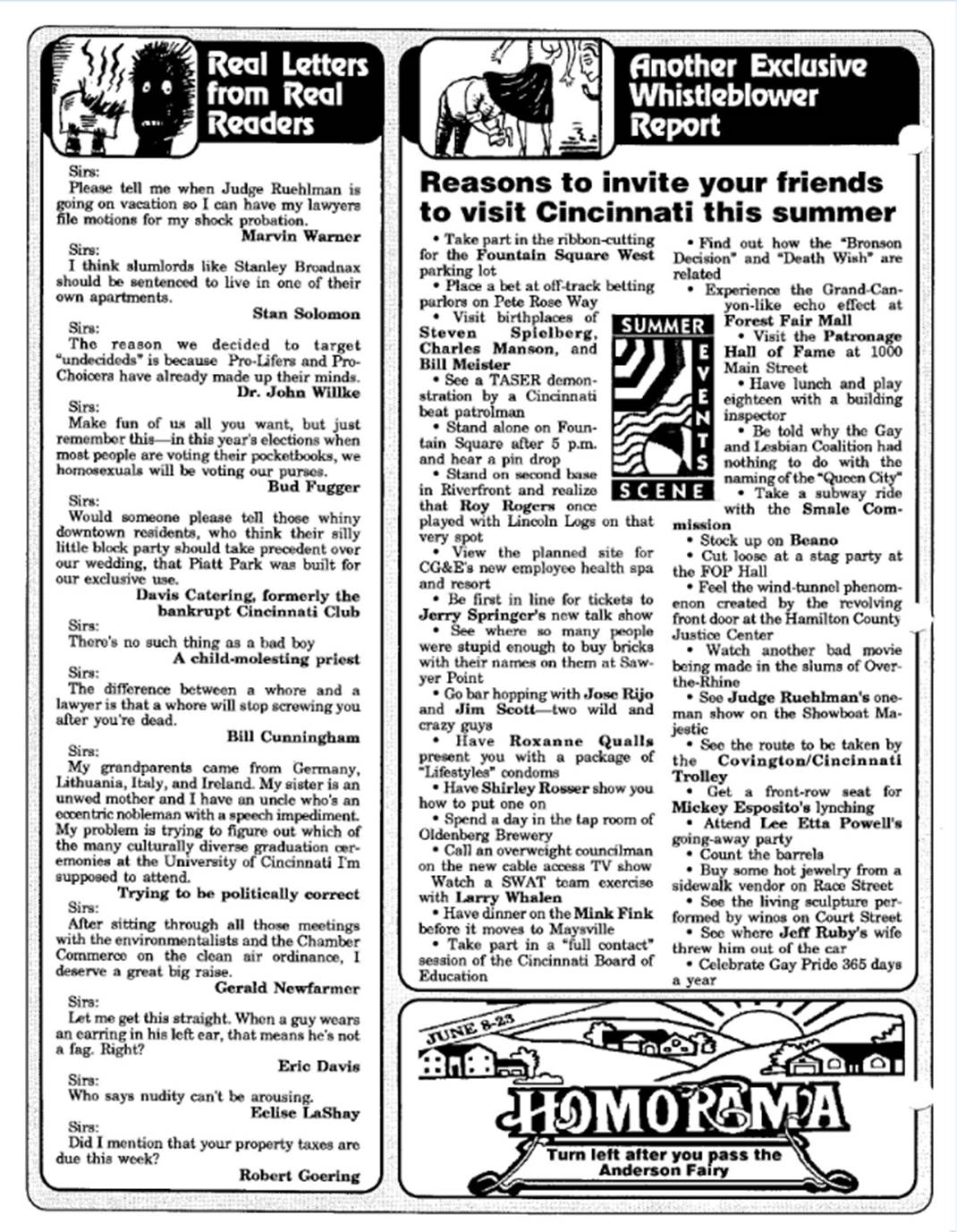 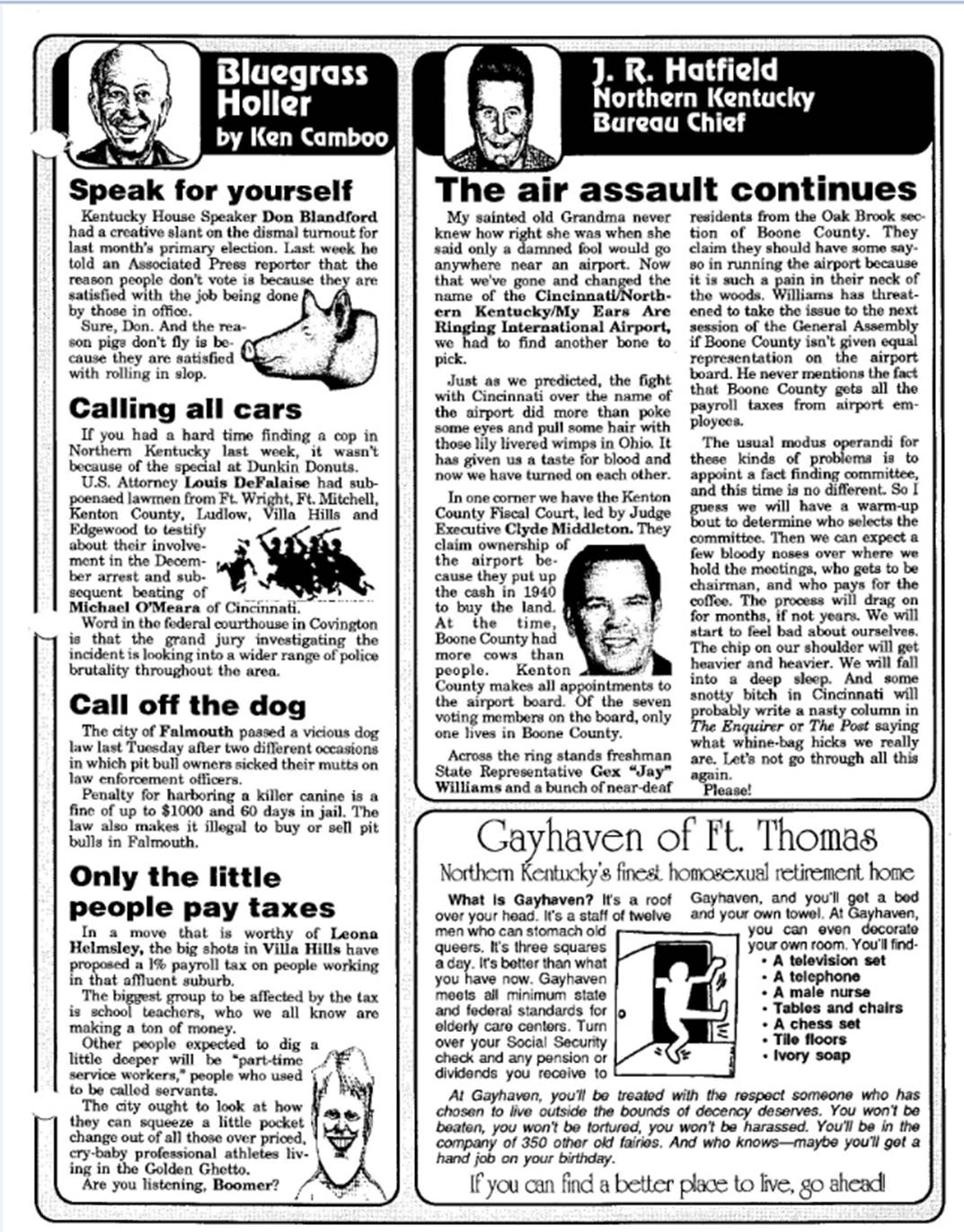 And Page Six included Hotline Hang-ups (some of the anonymous calls received on the Whistleblower Hotline, and in Real Gossip by Linda Libel, we heard about some “paternity issues” at the Cincinnati Zoo, along with an ad for Camp Crossdresser for boys and girls ages 5-13. 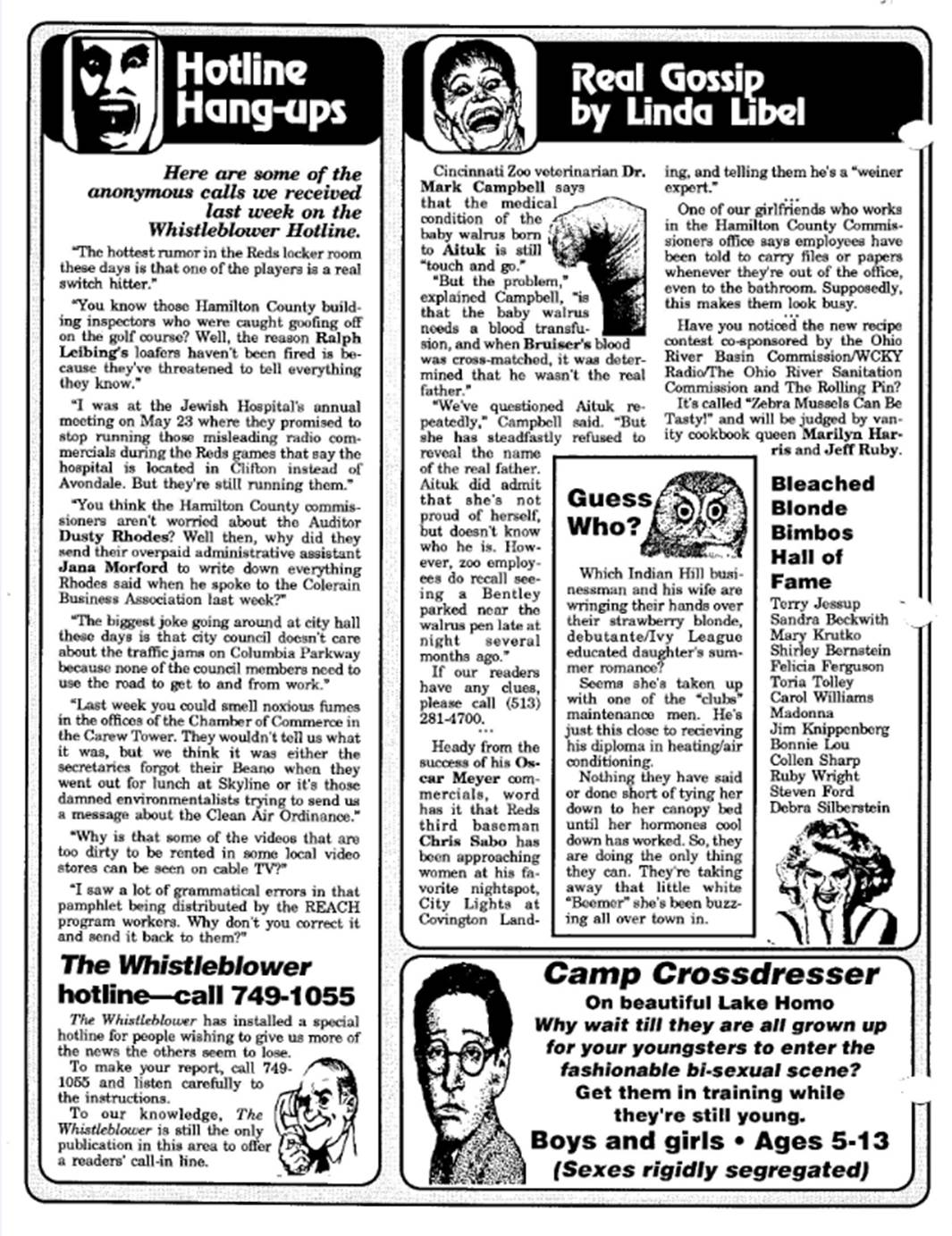