TODAY IS
SATURDAY, JUNE 04, 2022
TRUMP’S FIVE-HUNDREDTH DAY OUT OF OFFICE
AND AS SLICK WILLIE ALWAYS SAYS, “IT ALL DEPENDS ON YOUR MEANING OF ‘INFRINGED’ ” 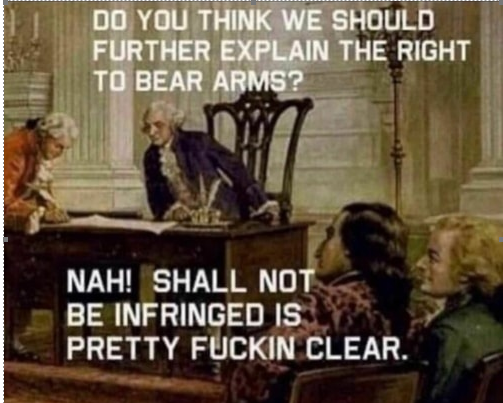 “After Green, Blue Is Our Favorite Color”  By James Jay Schifrin

This week in Patronage County, every politician will be reminded of the fact that June 8, 2008 was the date Hamilton County officially turned forever “Blue,” and our three Corrupt County Commissioners were talking about how such a thing could’ve happened.

“That’s easy,” said Commissioner Filch. “Obama-mania was infecting the entire political process, and all those Dumbed-Down, Self-Absorbed, Media-Influenced, Celebrity-Obsessed, Politically-Correct, Uninformed, Short-Attention-Span, Free-Stuff Grabbing, Low-Information Obama Supporters Who Put The Second Worst President in History In The White House—Twice, then gave Obama a Third Term By A Real Lack Of Election Integrity For Joke Biden*, and get all of their information from our Obama Supporters in the Press, like the ones on Channels 5, 9, 12, 19, Spectrum, and don’t forget out Feckless Fishwrappers, were just getting started.”

“How about years ago when the supposedly Conservative County Commissioners abdicated their authority over projects that required special funding like libraries, the zoo, the homeless, and helping the handicapped?” asked Commissioner Filch.

“But why was June 8, 2008, the date to remember when you’re trying to explain the reason Hamilton County officially turned forever Blue?” asked Commissioner Pilfer.

“That’s easy,” explained Commissioner Swindle. “That was the date Republicans in Hamilton County found a Demonic D-RAT like $tan Che$ley who was rich enough to afford to buy all their souls, and those guys really sold out cheap!”