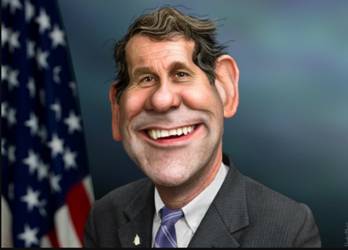 This afternoon at the Conservative Agenda, Political Insiders were congratulating Beloved Whistleblower Publisher Charles Foster Kane for finally coming up with an Official Whistleblower Nickname for Ohio’s Disingenuous DemocRAT Senator.  “Slandering Sherrod” does fall trippingly off the tongue (as Bill Shakespeare is wont to say),” Kane explained.

White House Press Secretary Sarah Huckabee Sanders had condemned “Slandering Sherrod” for his appearance Sunday on FAKE NEWS CNN, in which he stated that Miller “seems to be” a white supremacist. Brown also said without citation that “studies have shown that they have their allies sprinkled around the White House.”

“Senator Brown’s comments are outrageous and slanderous,” Sanders said in a statement. “The nonstop name calling from the Left continues to show an inability to build consensus and fix the problems ailing hardworking Americans. Senator Brown needs to understand that when he calls out public servants who are part of the Trump Administration, he is indicting the voters in Ohio themselves who overwhelmingly voted for the President’s agenda.”

“Instead of performing theater for the extreme left fringe, his time would be better spent fighting for everyday people by supporting the Trump Agenda of pro-worker trade and immigration policies that will raise wages and living standards for all Americans,” Sanders added.

The Ohio Republican Party Followed With This Press Release

Less than a week after appearing on Fox News to claim he wants to work with the White House, Sherrod Brown slandered the White House on FAKE NEWS CNN.

“Sherrod Brown’s comments over the weekend were disgusting and prove that he cares more about making his far-left donors happy than the truth,” Ohio Republican Party spokesman Blaine Kelly said. “Ohioans overwhelmingly supported President Trump last year, and Sherrod Brown would be wise to start listening to his constituents instead of the liberal elites in California.”

“Slandering Sherrod,” like every politician in America had been celebrating ever since Liberal Whacko Judge Tim Black ruled in favor of COAST’s Avaricious Attorney Chris Finney’s case to allow politicians the “Right to Lie” during political campaigns. “Obviously, the Right To Lie would include the Right to Slander,” the Slanderer’s Spokesman said.

Insiders couldn’t help notice the way our Feckless Fishwrappers keep asking why Cincinnati’s Diminutive DemocRAT Mayor John Cranley isn’t more popular,” Kane added. “And it’s really odd the Fishwrappers haven’t given The Blower any of the credit for Cranley’s unpopularity, especially with all of those Award-Winning Artis Conception Illustrations we’ve published over the years, like this one of Cranley coming to work after having been stabbed in the back, being watched by that man in the window with blood all over his coat.” 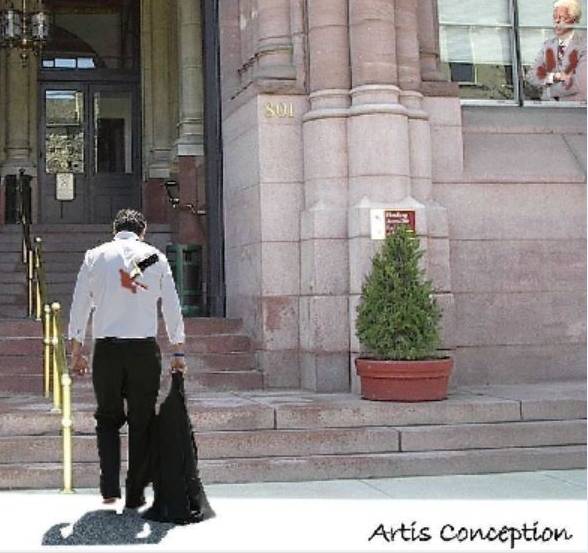 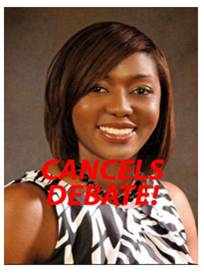 But what the Insiders really wanted to know was why Cranley’s opponent Yvette Simpson backed out of tonight’s debate. This is probably what Cincinnati could expect from Mayor Simpson— dodging real questions and leaving the West Side high and dry. Imagine what the budget would look like when a bunch of her cronies in the mold of tax scofflaw Wendell Young and all of those other D-RAT Clown-cil Candidates. The redistribution of wealth would begin immediately.

How hard would she try to shake down Amazon? The Blower’s sure it would be more than she tried with Children’s Hospital.

Knowing how she plays the race card, Our PriceHillian might say she requested that Blacks be bused in for the big event but wasn’t willing to pay for the buses or even all the fried chicken they’d undoubtedly eat.  Cranley of course said he already paid all those smelly West-siders to be there and they all have big gas guzzling cars.

However, Price Hill political don Weet Pitty told The Blower that The Farm pressured Simpson to cancel because they were afraid they’d run out of Fried Chicken and didn’t want a race riot on their White hands that might result in their barn getting burned down and the Race Baiter Rev Al Sharpton showing up next week looking for Shakedown Dollars.

Not to be outdone, we later learned from the Anderson Ferry that the real reason Yvette canceled tonight’s rumble in the White Jungle was because she had to help Mr. Wendell pay some of his back taxes.

Finally, after that story broke about that Colerain coach’s home visitations to a female student’s house, Angry Andersonians wanted to know where Forest Hills ranks in “Cincinnati’s Horniest School District Employees” in overall, employee-employee, and employee-student categories.  Sexsters in the District Office want to make sure their perversions would be put on a school performance report card, so Forest Hills would be getting straight A’s.  And parents being kept in the dark about who’s spending a lot of time with their kids might not be so happy with the school district leaders who work so hard at burying this stuff.