This Sunday in America…at the Churchof The Compassionate Conservative, Beloved Whistleblower Publisher, once again the Right-Wing Reverend Charles Foster Kane was asking his Political Parishioners to Pray for Privacy, especially after Disingenuous DemocRAT Frederica Wilson’s obvious attempt to politicize a condolence call President Trump made last week to an Army widow. Wilson said she was present for the call and claimed Trump was “insincere” when he told the widow that her deceased husband, Army Sgt. La David Johnson, “knew what he signed up for.”

In “Friday’s Features,” The Blower showed us a video where Bill O’Reilly discovered an easy way to silence Frederica Wilson and expose her for the fraud she really is.

Speaking to Newsmax, Bill blew the lid off the whole scam. For that’s what it was all along – one big scam.

“The thing that disturbs me is Congresswoman Wilson,” O’Reilly started, “They were given a 24-hour day to plan their attack. The family of the fallen Army Sgt. [La David] Johnson, who was a Green Beret, had been given 24-hour notice that President Trump would call.”

The Johnson Family gave that information to Congresswoman Wilson, who is an anti-Trump hater and has been from the jump. She knew the call was coming in, so she was in the car to eavesdrop when President Trump reached the 24-year old widow. 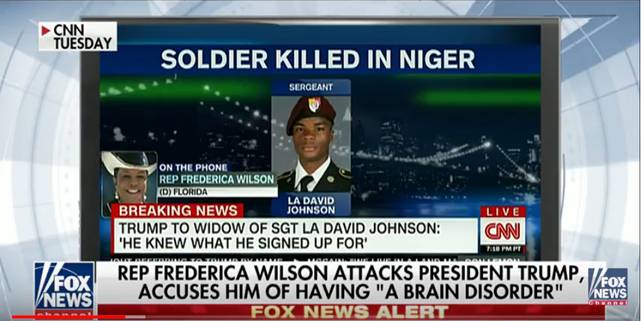 Then, our Media Puppet went on Fake News CNN and lied: Besides accusing President Trump of having “A Brain Disorder,” Wilson claimed: “The president insulted Mrs. Johnson, made her cry.” How obvious was that set-up?

Did Wilson really say: “For the President to say this young man signed up for his own death is so insensitive?”

Wouldn’t it be a coincidence if Frederica Wilson had said basically the same thing that time she was grandstanding about the death of those two FBI agents? Somebody ought to check that out! 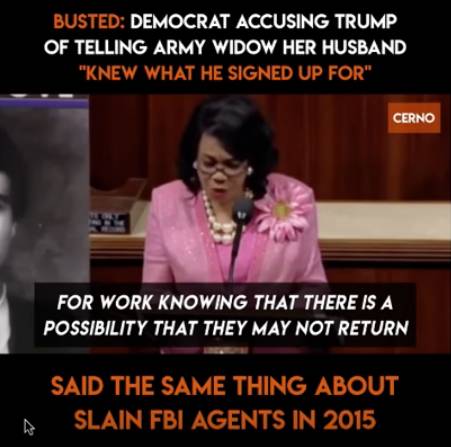 Folks at the Conservative Agenda realize it was a set up from the get-go. Trump had spoken about calling families and Frederica decided to exploit what she knew was coming for political gain. Her goal was to slander Trump and raise her stature with the Dishonest DemocRATS. To get the donations, to get the anti-Trump accolades, to get famous.

Naturally, Media Ambushers took Wilson’s word for it, because they hate Trump. Anybody who criticized Wilson would be branded a “Racist.” Everybody knows what the game is. Right out of the Deceitful DemocRATS’ Playbook.

Our good friend Ben Garrison explains it this way: 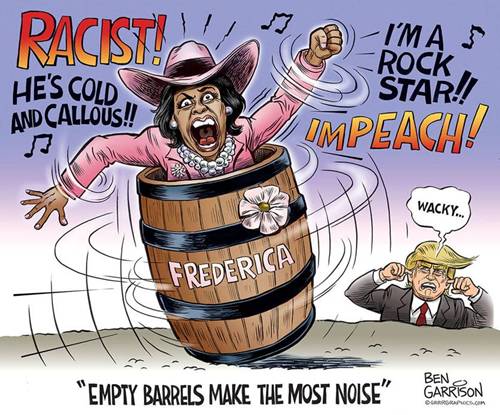 I can’t imagine how difficult it must be for a president to call and give the nation’s respects to a grieving family who lost a loved one in a military action.

Rep. Frederica Wilson, a DemocRAT from Florida, used the condolence call as another way to viciously attack President Trump. Not only was her loud complaint vulgar and tacky, Wilson then compounded the error by proclaiming herself as a ‘rock star,’ due to the attention she received.

Frederica is costumed in a “look at me” manner. She regularly appears in gaudy cowboy hats and loud rodeo outfits festooned with big flowers. She is all hat and NO cattle. Frederica Wilson represents one of the Nation’s poorest and least educated districts. Florida District 24 ranks 408th poorest out of 435 districts on America. Frederica needs to focus on home instead of Trump.

It is said that empty barrels make the most noise and so I drew Frederica as such.

DemocRATS like to twist whatever the president says in order to call him ‘racist’ and other disparaging words. They want him impeached. This time the noise seems designed to distract attention away from issues such as the Uranium One deal involving Hillary and Obama, who engaged in traitorous acts of bribery with Russia.

DemocRATS are “sending in the Rodeo Clowns” to distract from what may turn out to be the biggest scandal in American Political history. — Ben Garrison