TODAY IS
MONDAY, SEPTEMBER 06, 2021
TRUMP’S TWO-HUNDRED-AND-TWENTY-NINTH DAY OUT-OF-OFFICE
AND THIS HIGH SCHOOL TEACHER CALLED A STUDENT A PIECE OF SHIT ALL BECAUSE HE WOULDN’T PULL THE MASK OVER HIS NOSE…

A teacher at Glenbard North High School in Carol Stream, Illinois calls a student “a piece of shit” and threatens to call the police for momentarily having his mask under his nose.

In the video, the teacher appears to have his mask under his nose as well. pic.twitter.com/VqxFHg0J7r

And even the folks at the Woke Forest Hills Schools are starting to teach practical math that kids can use in real-world situations. It’s about time!

Debra From Anderson Says Here’s The Kind Of Teacher We Really Need!

“It is impossible to maintain civilization with 12-year-olds having babies, with 15-year-olds killing each other, with 17-year-olds dying of AIDS, and with 18-year-olds getting diplomas they can’t read.” —Newt Gingrich

…and furthermore, Hurley the Historian says on this date in 1969 they were still cleaning up from the Woodstock Music Festival. Liberals say it was all about “Peace and Love.” But how about the “Sex and Drugs?” Amazingly, folks at Obama’s “historic” Inauguration made even more of a mess, not to mention the chaos Obama’s administration made of the economy for eight years. 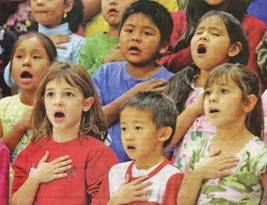 But Maybe There’s Still Hope for the Future
After all that bad press about all those teachers who stepped out of line teaching Obama songs to our children, folks at the Conservative Agenda think here’s one thanking soldiers you might be proud to hear from the third graders of Tussing Elementary, Colonial Heights, Virginia.

God Bless them, everyone.