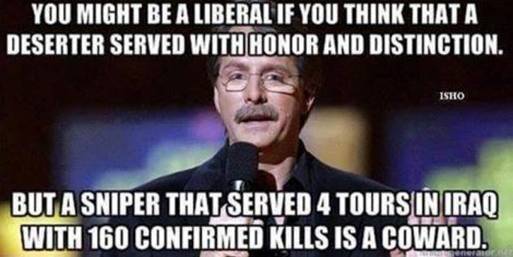 Are you not sure that you’re a liberal? Well, there’s an easy way to find out. You might be a liberal if…

1) ….Your newspaper calls people “bigoted” for being worried about bringing Syrian refugees to America, but you won’t run pictures of Muhammad because you’re afraid Muslims might kill you for it.

2) ….You think every man accused of sexual assault is guilty until proven innocent except Bill Clinton.

3)….You insist that anyone who questions global warming hates science even though you don’t understand any of the science behind it yourself and you say we have to do something about climate change primarily because you want to impress your liberal friends.

5) ….You believe there’s a “Republican War on Women;” yet you are okay with aborting baby girls for any reason, think any man who says he identifies as a woman should be able to use the women’s bathroom and you want to put Bill Clinton back in the White House.

6) ….You claim to constantly hear Republican “dog whistles” that 99% of the population misses; yet you’d deny you’re racist for insisting that black Americans aren’t competent enough to get an ID to vote.

7) …You think there’s a possibility that Obama might be able to have a productive conversation with radical Islamists who want to kill us, but dialogue with the NRA is impossible.

8)….You believe Hillary Clinton is telling the truth. About anything. Ever.

9) ….You simultaneously believe the police are violent trigger-happy racists who shoot people for no good reason and that we should disarm the populace so that only the government has guns.

10) ….You went to a talk given on your campus by a conservative just so you could scream at him for “invading your safe space.”

11) ….You think Chris Kyle was a monster for killing so many enemies of America while Bowe Bergdahl deserves to be treated with respect and compassion after deserting his unit.

12) ….You believe you’re a caring and compassionate person because you advocate giving other people’s money away to people you hope will vote for candidates you like.

13) ….You believe that anyone who dislikes Barack Obama must hate him because he’s a minority, but your hatred of Ted Cruz and Clarence Thomas is perfectly justifiable.

14) ….You think you are a sophisticated person with a deep understanding of complex political issues, but sum up every one with some variation of, “Republicans are evil, racist, and they hate you while liberals like me are nice!”

15) ….You think it’s vitally important to increase the number of Muslim immigrants coming to America so they can inform on all the other Muslims who are planning terrorist attacks.

16) ….You blame the Republicans for the failure of Obamacare even though none of them voted for it.

17) ….Your first response to a terrorist attack committed by radical Islamists who’ve sworn allegiance to ISIS is to try to disarm every law-abiding gun owner in the country.

18) ….You think an unemployed, white factory worker who’s struggling to feed his family has some sort of racial privilege compared to Barack Obama, Melissa Harris Perry or Al Sharpton.

19) ….You say fences don’t work and gun-free zones do, but if Republicans wanted the fence around the White House taken down and demanded that the Secret Service be disarmed, you’d accuse them of trying to get Obama killed.

20) ….You believe Bruce Jenner is a woman, Rachel Dolezal is black and Elizabeth Warren is an Indian.

The Blower says, “It’s Not Plagiarism If You Tell People Where You Filched It!”