TODAY IS
WEDNESDAY, AUGUST 10
TRUMP’S FIVE HUNDRED-AND-SIXTY-SIXTH DAY OUT-OF-OFFICE
AND WE REMEMBER WHEN KASICH VOLUNTEERED TO SPEAK ON BIDEN’S BEHALF AT THE D-RAT CONVENTION 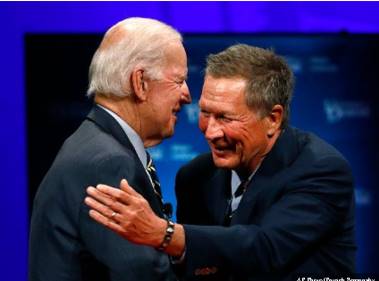 Still Delusional, Disgraced Ohio Ex-Governor Kasich was sandwiched between fellow socialists Michelle Obama and Bolshevik Bernie on DNC opening night! His Ohio Republican Party Chairman was under indictment for corruption and Schnozzy was out of the closet as a Hillary Clinton acolyte and Republican saboteur.

All of this is very freeing to Trump voters.

We no longer felt obligated to apologize for the RINOs who put Ohio 47th in new job creation, turned Hamilton County Blue, and made sure we had a Senator who avoided Washington by wearing his little mask and hiding under his Terrace Park rainbow flag. After 30 years in Federal Office, even a Portman should’ve been able to secure the repair of the Federal Brent Spence Bridge. Like with the Bengals, The Blower guessed we’d have to wait ‘till next year!

Edition #63 (published on August 13, 1991) of the original printed edition of The Whistleblower (not the Newswire) was delivered to Persons of Consequence all over town. It was our “Grieving over the loss of Schottzie —our national treasure” Issue, and our Really Big Story was all how baseball writers really felt about Schottzie’s demise; Our Top Ten List listed the top ten reasons Whistleblower Publisher Charles Foster Kane was chosen to present the annual Whistleblower Professional Journalism Awards to the Society of Professional Journalists. Plus there was a story about the Blue Chip Republicans’ party to make fun of the homeless. 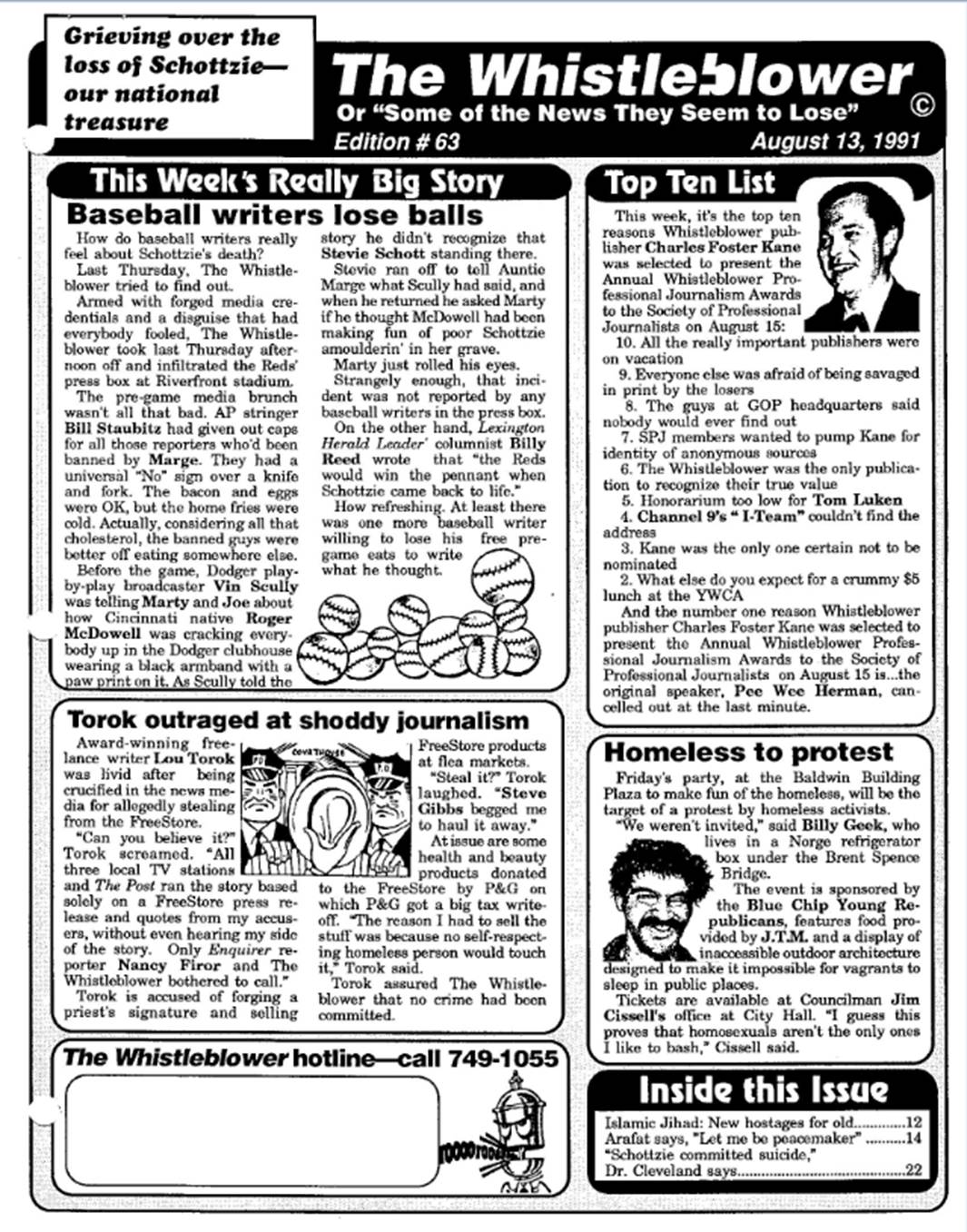 Page Two with Real Editorials by Publisher Charles Foster Kane about a crisis of confidence at the Cincinnati Public Schools. Real Facts told how Mayor David Mann avoided some obnoxious homos. Would there be a boycott when Whistleblower Publisher Charles Foster Kane presented awards at the Society of Professional Journalists? Cincinnati Councilman Nick Vehr was vetoed in the Weekly Whistleblower Limerick Contest, plus there would a tax levy on the November ballot to raise money to pay for Cincinnati Public Schools superintendent Michael Brandt’s one-year contract. 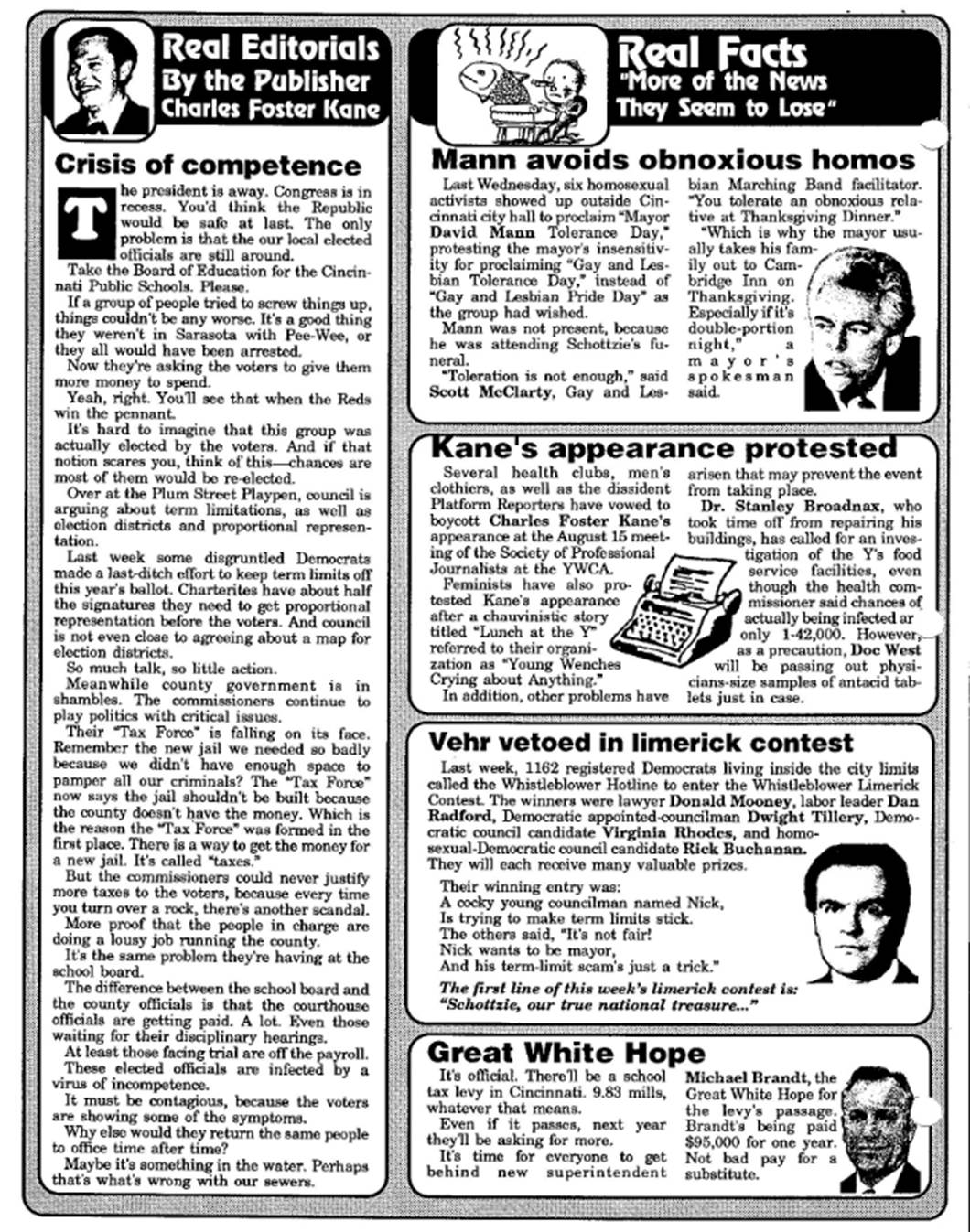 Page Three featured Cheap Shots at Norma Rashid, Butler County Sheriff “Clean Dick” Holtzberger, Starvin Marvin Warner, Judge Fred Cartalano, and Robert Ruehlman. There was a promo for Whistleblower Publisher Charles Foster Kane’s appearance on a 55 WKRC Radio program, as well as also another Real Guest Editorial by Bunky Tadwell (this one was about police brutality, but we couldn’t tell whether he was for it or against it). 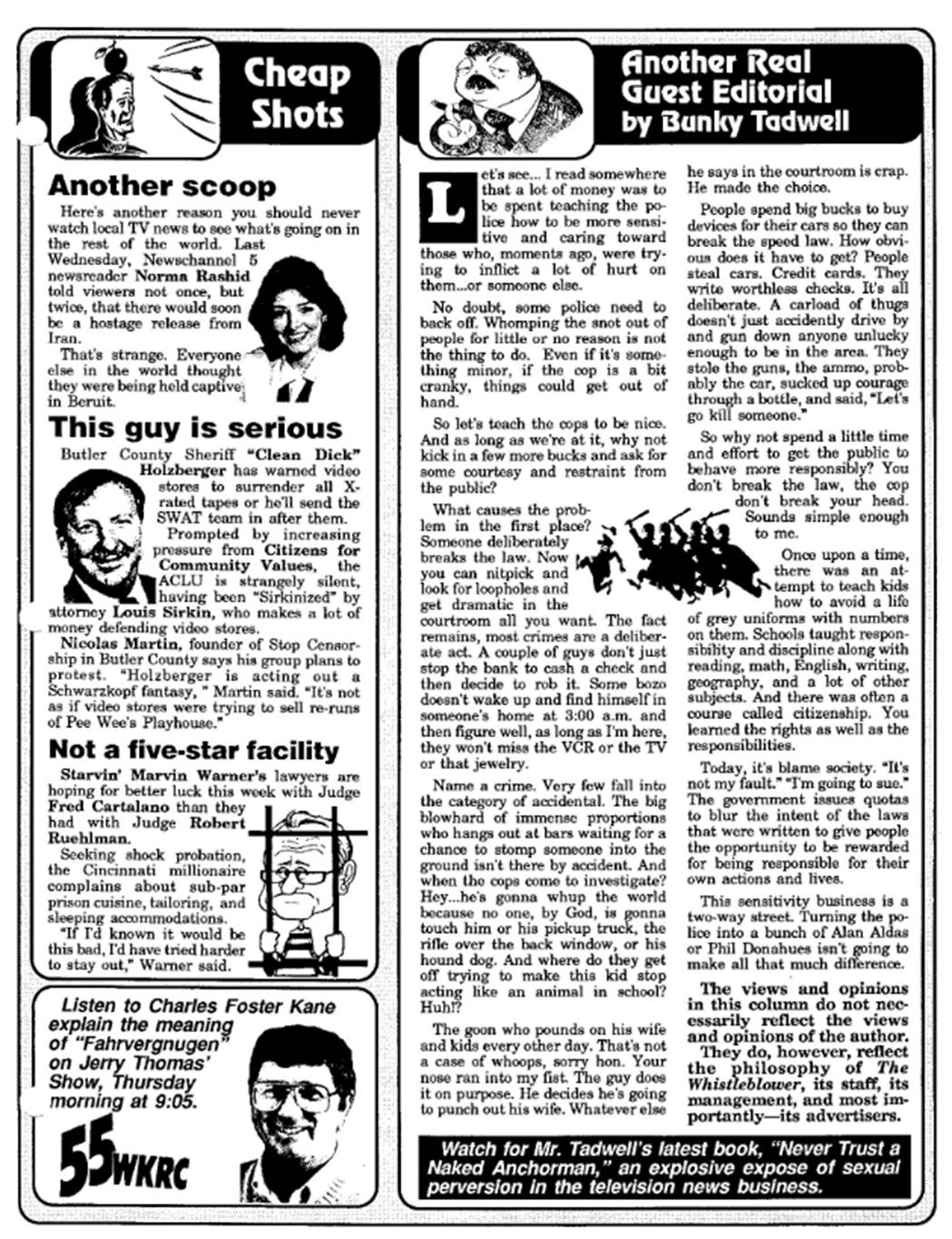 Page Four was for our regular weekly Real Letters From Real Readers column, and Another Exclusive Whistleblower Report featured the efforts of those Platform Republicans to scuttle the appointment of Hamilton County Commissioner Sandra Beckwith to the Federal Bench. There was also an ad for people who wanted to play Family Feud on the phone. 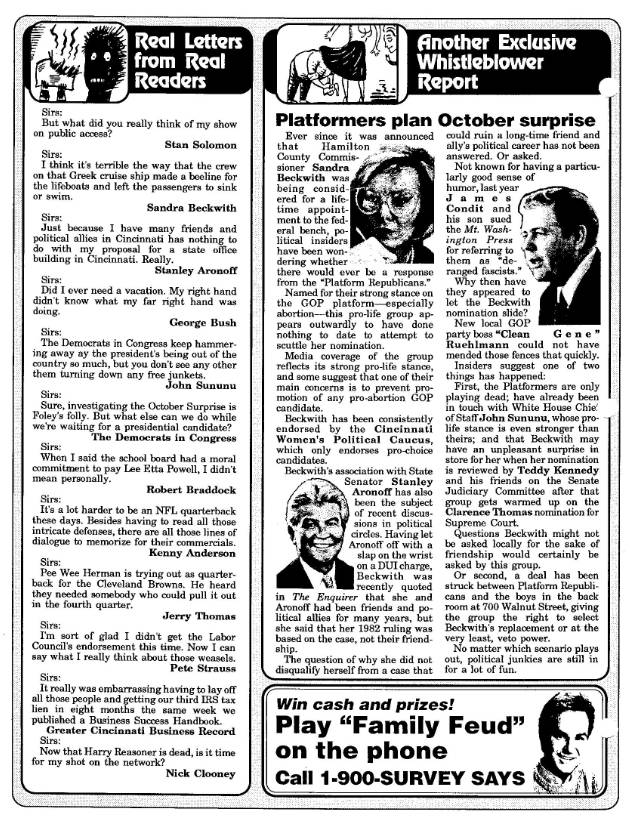 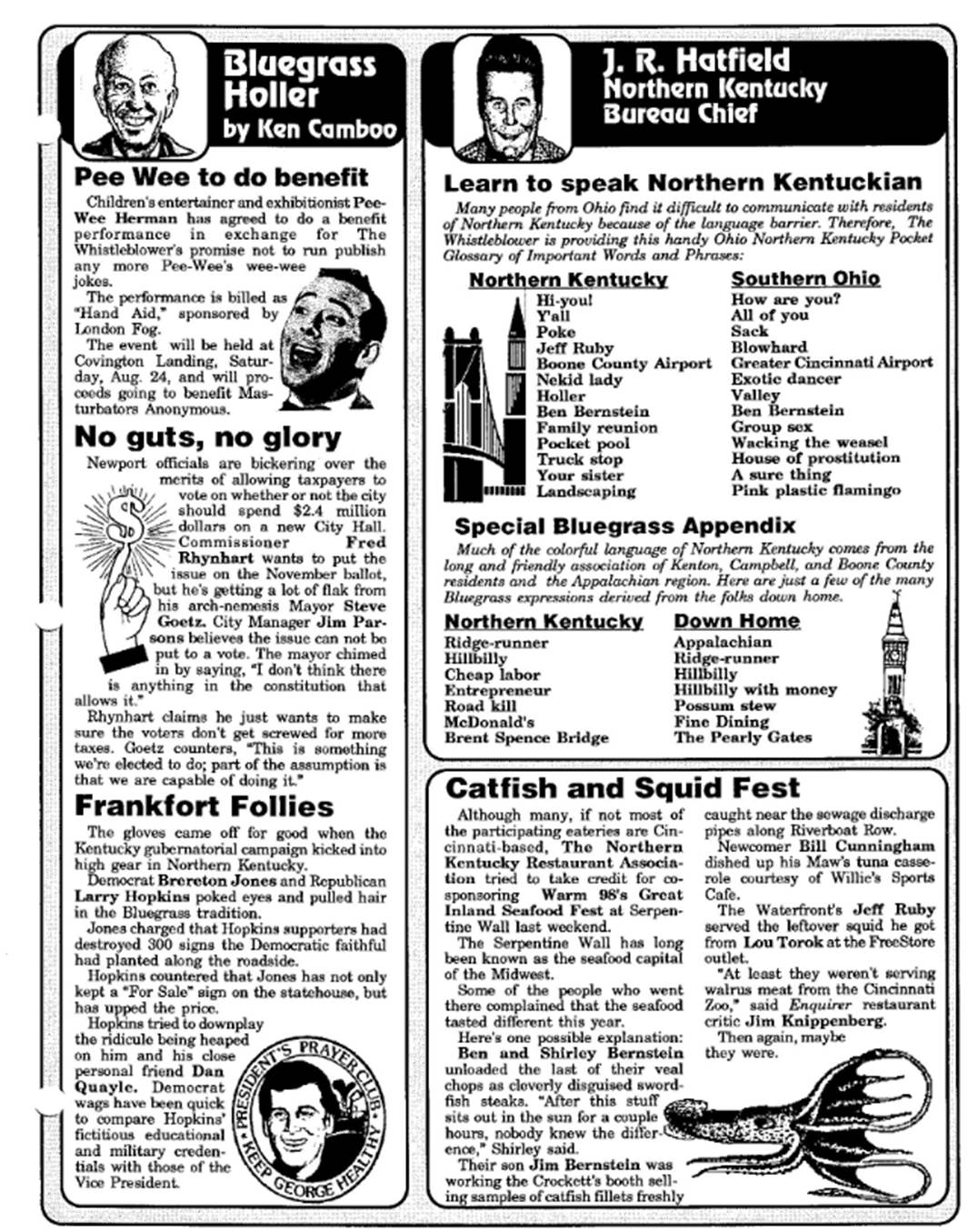 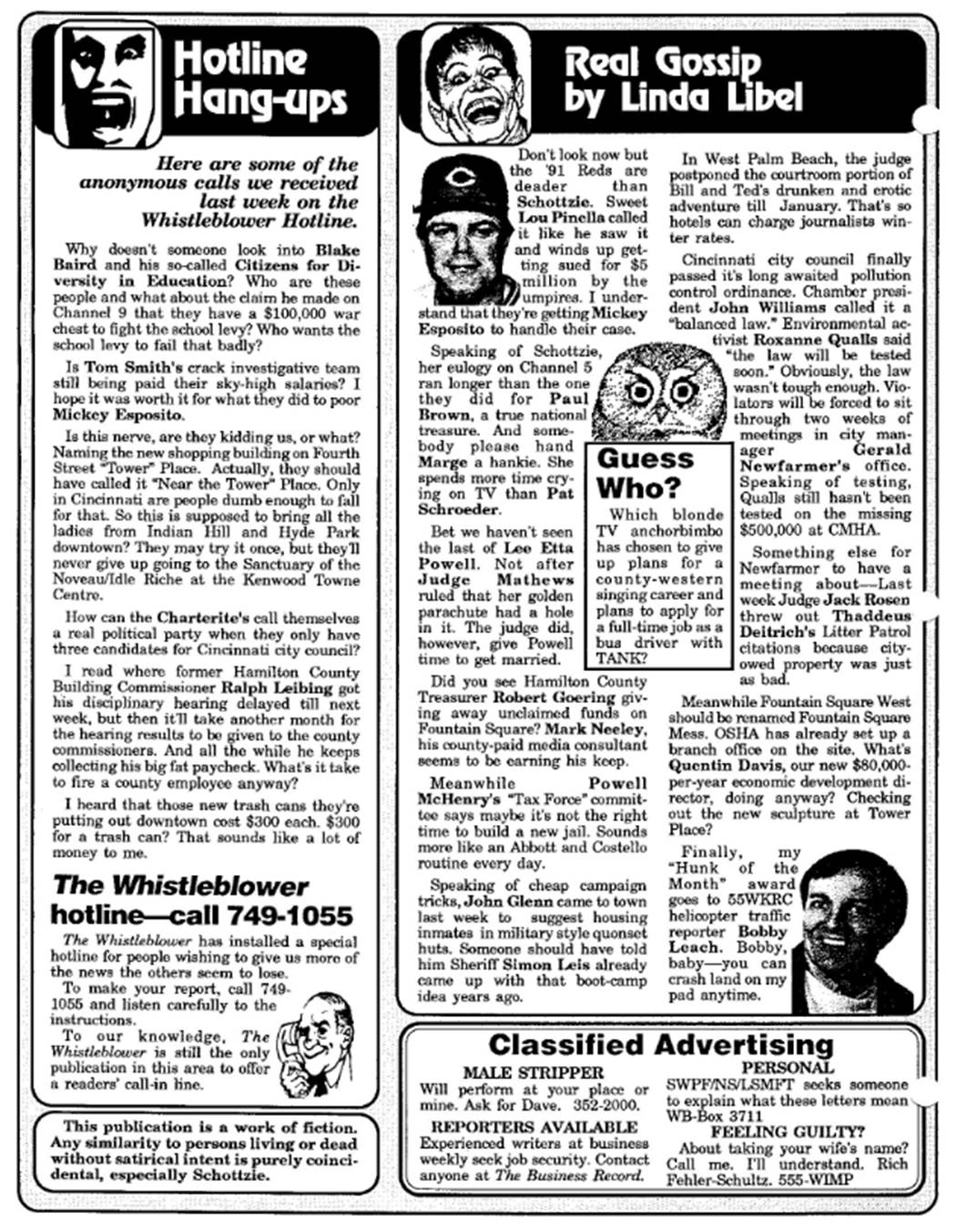