By Thursday afternoon she apologized BUT SHE WAS NOT FIRED NOR WAS HER SHOW CANCELLED. “It was inappropriate and inexcusable, blah, blah, blah. ” “I crossed a line, and I deeply regret it, yada yada, yada,” she tweeted. 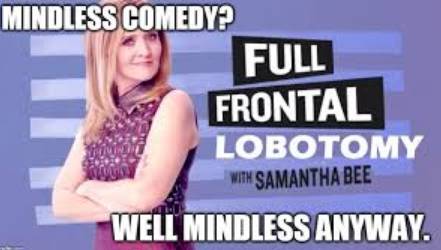 TBS suddenly became contrite after the backlash over their “Full Frontal” comedienne’s calling President Trump’s daughter Ivanka a “FECKLESS CUNT.” “Those words should not have been aired,” TBS added in a statement. “It was our mistake too, and we regret it.” They’re obviously promoting their “Full Frontal” host to be the headliner when Liberals Lambaste Donald Trump at next year’s White House Correspondents Controversy!
Bada Book, Bada Boom!

This comes on the heels of ABC’s CANCELING their hit show “Roseanne” for daring to make a joke about Valerie Jarrett, just because right-leaning comedienne Roseanne Barr sent out a little tweet about Obama’s African American co-conspirator Valerie Jarrett’s being the lovechild of the Muslim Brotherhood and the “Planet of the Apes?”

“It’s the worst word in the English language that you can use to describe a woman” Kurtz explained. Instead it’s being reported as, ‘Wow did you see what Samantha Bee said?’

Mediaite columnist Joseph Wulfsohn noted that Barr was fired in three hours after likening former President Obama adviser Valerie Jarrett to an ape, but TBS has remained silent on Bee. “If that’s not a double standard, I don’t know what is,” Wulfsohn tweeted.

Samantha Bee may have apologized for calling President Trump’s daughter Ivanka a “FECKLESS CUNT” in her Wednesday monologue on “Full Frontal,” but many of her like-minded celebrity friends like Kathy Griffin, Sally Field, other Hollywood liberals are proudly standing by her side.

“CUNT” may be the worst word in the English language that you can use to describe a woman, but Power Thesaurus has 295 synonyms for “CUNT.”

And after having to watch Crooked Hillary for the past 25 years, everybody understands the meaning of “CUNT.” Maybe tomorrow, The Blower needs to explain the word “FECKLESS.” 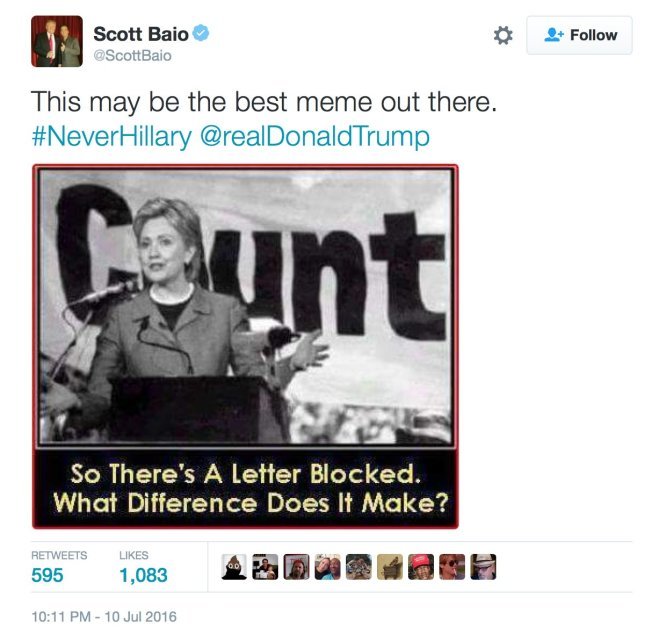 FINALLY AT TODAY’S MEETING OF THE CONSERVATIVE AGENDA, Political Insiders were celebrating Clint Eastwood’s 87th Birthday on May 31 and comparing some of their favorite Clint Eastwood quotes, like “I have a very strict gun control policy: if there’s a gun around, I want to be in control of it,” “A man’s got to know his limitations,” and “I tried being reasonable, I didn’t like it.”